I've skipped a couple of bridges, and now we've switched to the right bank channel of the Seine, heading back downstream past the Île Saint-Louis. 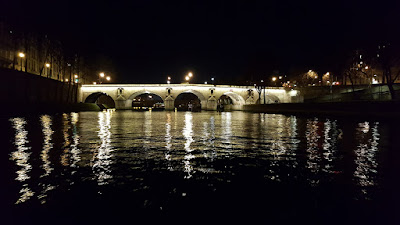 Pont Marie is Paris's second oldest surviving bridge, completed in 1635, some twenty-eight years after the oldest surviving bridge, Pont Neuf. It is named for Christophe Marie, who proposed it in 1608; Marie is variously described as a developer and as an engineer. When the bridge was proposed, the island was actually two islands, largely used for pasture, and the bridge was built to facilitate house building. Started in 1614, the same year the islands were joined into one, the bridge took two decades to build.

The structure has five arch spans. There is a niche above each pier's triangular cutwater, intended to house statues, but no statues were ever installed on the bridge. As with many bridges of the period, wooden houses were built on the bridge, eventually being removed in 1788. Again, as with many nearby bridges, the bridge has been repaired and altered on several occasions, including reconstruction of two arches between 1660 and 1670 following collapse caused by a flood, and major works in 1850-51.

As can be seen in my photographs, the largest span is not the central span, but the second span from the left, which is elliptical, while the others are semi-circular. I'm not sure whether this relates to the partial reconstruction of two arches. 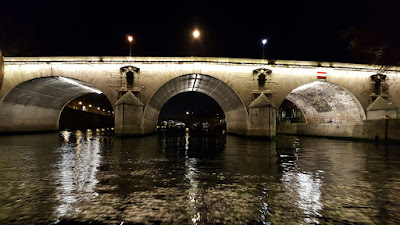 Whitney comments on the bridge:


"The ornamentation of the bridge is refined and in good scale. The plain masonry and the proportions of piers and arches give the bridge an appearance of dignity and great strength".

I am happy to agree.

I find it interesting that such an asymmetrical bridge can be regarded so highly - nobody would design a bridge of this type in such a way now without expecting adverse comment. I suspect most observers simply never spot the odd-arch-out.