I chose to stop at Dunglass essentially by accident - driving up the A1 between Berwick and Edinburgh, I was mildly intrigued by a glimpse of three arched bridges in close proximity spanning the gorge of the Dunglass Burn (as in the photograph on the right).

There are actually five bridges here, although I didn't get to see the oldest, the so-called Old Bridge, built in the 17th century. That's a shame, because what I've read since then suggests it might be the most interesting, even though it has the smallest span (10.5m). 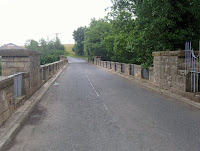 The next oldest bridge is the aptly named New Bridge, built in 1798 to a design by James Burn, a local builder and architect (although Historic Scotland attribute the design to his brother, George Burn). Spanning 25m, the arch rises 23m above the stream below. The crenelated parapet (pictured left - the bridge can be seen in elevation in the background of the next photo below) looks quite kitsch to modern eyes, but there are other interesting features, such as the facing voussoirs, some of which step out. Apparently there are arches and doorways within at least one of the abutments, but I didn't see them.

In 1836, a third bridge was built, Dunglass Viaduct (or "ECM8/109", as Network Rail would now have it), which originally carried the North British Railway. This was the largest and tallest structure yet, with five small spans (each 9m) and a large central span of 41m passing 33m above the watercourse (pictured right). It was designed by the NBR's engineers, Thomas Grainger and John Miller. All the bridges here (apart from the most recent), are Listed Buildings, generally Grade B, with only the railway viaduct achieving Grade A. 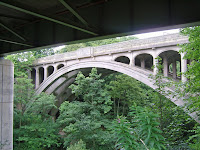 Nearly a century later, a new road bridge was built. The road had been designated as the A1 in 1921, and no doubt the New Bridge struggled to meet the demands on increasing traffic. In 1932, the first A1 bridge was completed (pictured left). It was designed by Blyth and Blyth and built by Crowley Russell and Co. It is a reinforced concrete arch structure, with five arch ribs. In 1987, it was apparently due to be demolished due to structural problems, but I guess demolition was avoided by building the fifth and final of these structures. 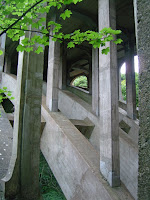 For me, the concrete arch bridge is visually the most interesting of these spans, especially when viewed from closer at hand, where the forest of columns (pictured right) seems to echo the forest of trees that surrounds it.

In 1932, Robert Maillart was building his splendid Rossgraben Bridge, having built Salginatobel two years earlier. In the same year, he completed deck-stiffened arches at Traubach and Bohlbach, dress rehearsals for his 1933 masterpiece at Schwandbach. But even his earlier bridges were more refined in form than this A1 bridge, with its clumsy detailing and awkward masonry parapet. It shows quite how far behind Maillart most reinforced concrete arch designers were, but I still enjoyed seeing the Dunglass bridge. 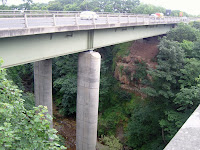 The final bridge carries the present A1, and is a steel composite girder structure, with two massive girders carried on 20m tall finger piers. I don't know exactly when it was built, but there was a technical paper published in 1997 concerning the launching method used for construction, so perhaps that gives an indication.

It's easily the least attractive of any of these bridges. It's a shame that they didn't build a fifth arch, but the economics of bridge construction have changed enormously since the first Dunglass bridge was built.

Old one washed away in floods of 2009