Robert Maillart's Schwandbach Bridge, built a year after its Rossgraben neighbour in 1933, is only a short walk further up the same road. It's regarded (at least by serial Maillart-booster David Billington) as one of Maillart's masterpieces. It takes a design he had developed at Bohlbach in the previous year, and perfects it, much in the same way as Rossgraben built upon what he had learned from Salginatobel Bridge. We were due to visit Bohlbach later in the day, so I'll leave any comparisons for a later post. 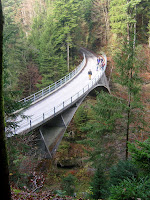 Spanning 38m, with an arch only 200mm thick, it's no surprise that Schwandbach Bridge is seen as a classic of minimal, elegant design. It's an example of a deck-stiffened arch, a form which Maillart didn't invent but did pursue more vigorously than others. Essentially, the stiffer the bridge arch is, the more it attracts bending moments - if it can be made very slender, the stiffer deck will then carry most (nearly all) of the bending - allowing the arch itself to be very slender.

The aesthetic merits of this approach are conflicting - sure, the arch looks nice, but the deck above can look very heavy indeed. It works well on relatively narrow bridges, where the parapets can double as deck beams and provide the necessary stiffness. On wider bridges, the deck slab itself must be made stiffer, resulting in a very ungainly structure. 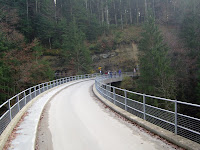 The real advantage is in the cost of construction of the bridge. Because the arch is thin, it can be built using relatively lightweight and hence less expensive formwork. The arch itself is then used as the support while crosswalls and then the deck are constructed.

What makes Schwandbach such a work of genius is not the admirable slender arch, but how the bridge is arranged in plan. Carrying a curved roadway across a deep valley, the arch is curved on its inside edge, but straight on its outside edge. 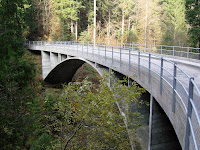 The inside edge lies directly below the curved edge of the deck, but the outside edge is offset more from the deck as it gets closer to the arch springings. This allows the crosswalls to be splayed out, carrying the thrust from centrifugal and eccentric forces in the deck down into the arch - and as the arch is wider at its supports, it is much more stable against the same loads.

It's the sort of thing that seems amazingly simple in its use of geometry to control the load effects in the bridge, but is usually very difficult to develop into such a consistent and confident solution. 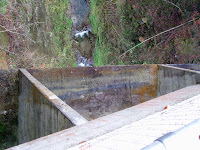 Like Rossgraben, the grey concrete works well in Schwandbach's setting, especially where it's stained with moss and lichen. The artificial geometry of the highway is made to seem like a natural feature, as much an integral part of the setting as the rocky valley sides.

As at Rossgraben, we didn't get to spend all day admiring Schwandbach Bridge, but had to head onwards, to lunch in the Alps en route to two more Maillart bridges near Interlaken.