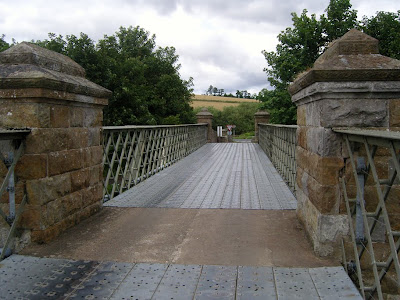 The Union Bridge and Twizel Bridge are amongst the best known of Britain's historic bridges. Heatherslaw Mill Bridge is definitely not - I don't believe it features in any of the guides to British bridges that I covered recently, nor is it in "Civil Engineering Heritage: Northern England".

Nonetheless, it is a Grade II Listed Building, and a type of bridge that I always find interesting.

It provides road access across the River Till to a Victorian corn mill on the Ford & Etal Estate. It was built in 1877, supposedly as a temporary access in place of an existing river ford, by the Glasgow firm of A & J Main & Co. They were at one time better known for their wrought iron fence posts and gates, although they became increasingly involved in structural metalwork as time went on.

The bridge is described at SINE as consisting of iron with a steel lattice parapet, and at Scottish Ironwork as a wrought iron lattice girder. 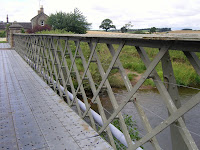 The lattice girder has obvious attractions to the designer, in combining the functions of the parapet and support beam in one (this wouldn't be permitted on modern road bridge, due to the risk of vehicle impact leading to the collapse of the whole bridge). From one perspective, it overlaps multiple triangular trusses, allowing the shear force effects to be shared by smaller members which are easier to fabricate. Seen another way, it's a plate girder with the web perforated, allowing the largely redundant material in most girder webs to be pared away.

At Heatherslaw, the two sets of lattice members are noticeably eccentric to the girder centreline - I presume that any tendency of this to twist the main girder flanges in plan is reduced because the lattice members apply roughly equal opposing forces at any nodal point.

The bridge originally had a timber floor, which was replaced in 1951 with the War Surplus decking units now present. It's not a type of flooring I can recall seeing previously.

It's an unassuming bridge design, a reminder from the past that modesty can still be a virtue.