From Bern we headed to Habkern, near Interlaken, home to two more deck-stiffened reinforced concrete arches by Robert Maillart. Habkern is in a very hilly but essentially agricultural area. It has steep-sided valleys but they are somewhat less spectacular than the settings of the two bridges at Schwarzenburg (Rossgraben and Schwandbach). 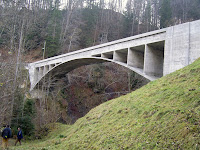 Built in 1932, Traubach bridge is straight in plan, and much plainer in appearance than Schwandbach. In particular, its solid concrete parapets look very heavy, and despite the slender arch it would be difficult to describe the bridge as elegant. A slight overhang on the outer face of the parapet only draws attention to its monolithic flatness, rather than breaking it up.

Also contributing to the heaviness are the plain-faced concrete abutments and wing walls, which Maillart successfully avoided elsewhere. A couple of service pipes are supported on one side of the bridge, and overall it gives the appearance of something sturdy and practical, rather than aesthetically exceptional. 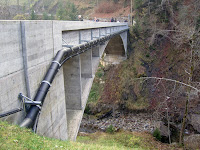 The arch spans 40m, and the bridge has been recently strengthened to carry heavier vehicle loads. One advantage of the deck-stiffened arch when it comes to strengthening is that most of the live load bending is carried in the deck, which is much easier to strengthen than the arch. At Traubach, the deck slab and parapet beams have had much of their concrete replaced, allowing a prestressing system to be introduced (see photos at link below). A hydrophobic surface coating has also been added to guard against chloride ingress from highway de-icing salts. 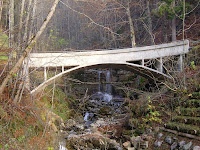 Bohlbach bridge is a short walk further along the same road from Traubach, and was built in the same year. Spanning a mere 14.4m, it's another deck-stiffened arch, but curved in plan similar to Schwandbach Bridge. In many ways, it was a dry run for Schwandbach, which would be built one year later. 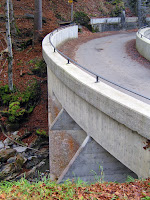 At Bohlbach, the bridge abutments are almost invisible, and the absence of wing walls means the solid concrete parapet is less obtrusive. I quite liked it: the setting is charming, with a waterfall and fallen tree across the stream to one side; it's at a scale where monolithic flat grey concrete works without being overpowering. 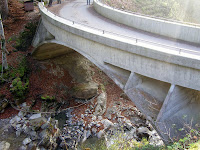 However, it's easy to see how Maillart improved the design by the time of Schwandbach. By then, the solid concrete parapets would be gone, replaced with lightweight metal railings, making the bridge far more elegant. Also, at both Traubach and Bohlbach, the arch and deck merge together for a considerable length of the span. At Schwandbach, they only just kiss, giving a much more light and open aspect.

Much of the pleasure of our trip was in the Alpine scenery, and the vernacular wooden buildings to be found everywhere we went. Nearby to Traubach we found a lovely farm hut, festooned with pots, pans and sledges ready for winter, as well as a delightful shepherd's barn. 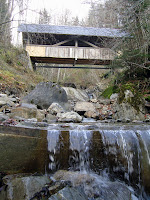 There was also a simple king post truss covered wooden bridge across a stream, which attracted almost as much attention as the Maillart bridges! This had clearly been recently renovated, with half the roof re-shingled, and other protective boarding replaced. This was very much a craft structure, with traditional timber jointing and marking in evidence. It's hard to imagine that much in the way of analytical calculation was required for its design. 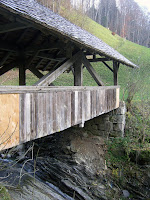 But in many ways the Maillart bridges are also craft structures - plenty of evidence of their making (in formwork boarding marks) is present, and Maillart himself avoided calculations whenever possible (relying on engineers such as his assistant Ernst Stettler for this), to the extent that Swiss academics derided his tanzboden statik ("dance-floor statics").
We left Habkern tired but very much a group of happy pontists after a great day tramping around the countryside in search of classic bridges. I think we had little idea quite how different the following day would be.

Further information:
Posted by The Happy Pontist at 11:15 PM