A couple of weeks ago, I visited the River Dee in Aberdeenshire, and returned to three bridges which I had previously seen in the Summer of 2012.

At Christmas 2015, the Dee experienced one of the most severe floods in its history, along with several other rivers in Britain. A number of bridges along the river were severely damaged, and one destroyed.

Cambus O'May Bridge was built in 1905 by James Abernethy & Co., and then substantially rebuilt in 1988. It's a very fine pedestrian suspension bridge, one of many along the River Dee. It looked good on my 2012 visit.

It's amazing that the bridge survived the 2015 flood at all, as the level of water battering the bridge can be seen in the video below:


When I visited in mid-August 2016, the damage to the bridge is clear. Unsurprisingly, it is currently closed, with no sign of any plans for repair work. 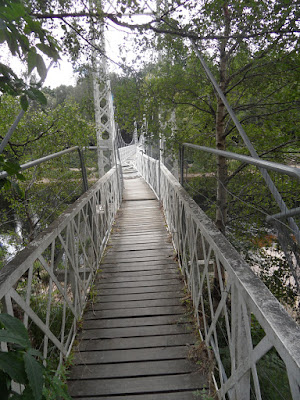 The entire structure has been bent sideways by the force of the water. 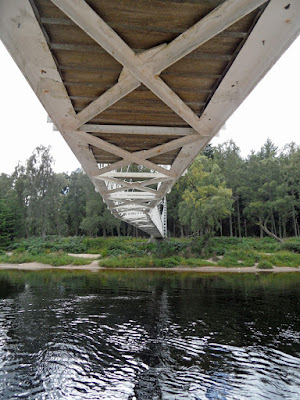 Several of the bridge hangers are missing or bent. 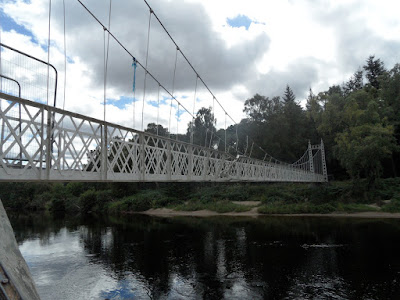 Most significantly, there is major damage to one bay of the main deck lattice truss, presumably due to impact from debris. 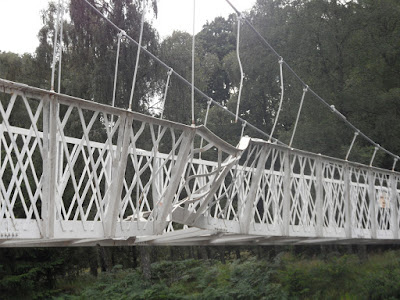 I think the most likely future for this bridge is another reconstruction, as I think it would be inordinately difficult to cut out and replace the most damaged section and to straighten the remainder of the bridge. That seems unlikely to happen any time soon, as the bridge does not provide critical access to anyone, and I imagine there are other priorities for limited budgets.
Posted by The Happy Pontist at 9:14 PM