At last, that's over. I started posting reports on the bridges visited during a 3-day Scottish tour at the beginning of July, and it has taken until now to finish covering them all. There were 35 bridges seen over those three days, and this map shows the ground covered (blue is the first day, red the second, and green the third): 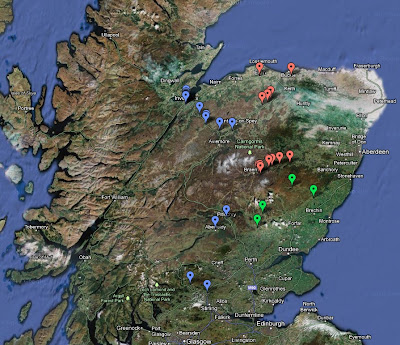 I said at the outset that "Several of the bridges are among those in Britain which any serious Pontist should try and visit once in their life".

These are the ones I would recommend going out of your way to see, if you get a chance:
I plan at some point to complete a similar tour of the western half of the Scottish highlands. In the mean time, now that this mammoth task of reporting on bridges is complete, I can get back to some more "normal" blogging. Next up, as soon as I get time, will be a series of book reviews.
Posted by The Happy Pontist at 10:01 PM

Hi, I really enjoy your posts on the bridges. And I would like to ask - how are you planning your bridge trips? Do you pick a part of a country and going through it, or you have a plan before you go. I had few bridge trips on my own, but yours look like more prepared, or better said more continuous. Do you have some advice?

It's a mixture. Some trips are places I go on holiday with my family or for work, and what you see here are whichever bridges fit in around those activities. Others are specifically to see bridges, but those are quite rare, and always planned carefully to fit in as much as possible each time. For choosing locations, it's purely about where is convenient for me and any travelling companion(s) at that time.