The grand finale. The pièce de résistance. This, believe it or not, was planned as the culmination of our entire Scottish bridge tour. And, I think, rightly so. 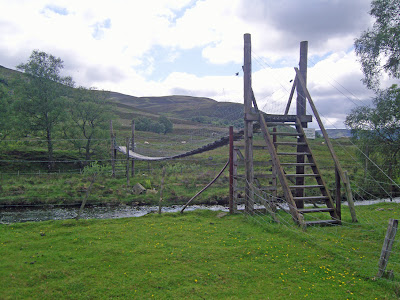 You won't find any information about this bridge online, indeed, so far as I can tell, the images I'm posting here are the first on the internet. It's in the middle of nowhere, across the River Esk, at the far end of the road in Glen Esk, close to Invermark Castle. It leads from a field across the river towards the hills, and I imagine is mainly there for the use of anglers. A sign at one end reads "Dalhousie Estates - Private estate bridge not for public use - any persons using the bridge do so at their own risk".

I first encountered this bridge through Mike Schlaich and Ursula Baus's excellent book, Footbridges, where it is accorded a two-page spread, ranking it up there along with some of the finest contemporary pedestrian bridges. Ever since then, I knew I had to see it for myself.

By the standards of some of the bridges to be found elsewhere in the world, this is a high-quality, sturdy structure. By contemporary British standards, it is a thrillingly ramshackle agglomeration of scrap metal and wood, the sort of thing you might imagine the man who repairs the fences on an upland farm throwing together. Which is precisely what seems to have been the case here.

The bridge appears to be held aloft largely by the power of wishful thinking. At first glance, you may note the presence of suspension wires at either side, and assume that these support the deck, but in fact these are merely there to hold the wire-mesh "parapets" in place. The bridge deck is of the catenary suspension form, comprising three timber planks, with occasional cross-planks, supported on precisely seven strained fencing wires. These provide the primary, possibly the only, means of support.

The support wires are braced via cross-members against the tree-trunk masts, which in turn are held back by stay wires, anchored into further timbers driven into the ground. Mesh-link fencing at either side of the approaches to the bridges steers the traveller towards the steps, and presumably serves the more important function of keeping livestock from pulling the wires down.

Lateral tie wires have been installed to reduce lateral sway, although even with these in place, this is possibly the most precarious bridge that I have ever crossed. It's hard to escape the feeling that you will be pitched into the river at any moment.

At one end of the bridge, the main deck support wires are wound round tensioning ratchets. At the other end, they are simply turned round a cross-bar and twisted together. This really is all that holds you up while you cross.

Everything about this bridge is brilliant. It's an adventure to use, a heart-punching antidote to the sanitised world of health-and-safety that binds most bridge designers. It's also a splendid example of the charms of vernacular design. Can anyone imagine a professional designer producing something so intriguingly crafted?

It provided a fine end to our trip. 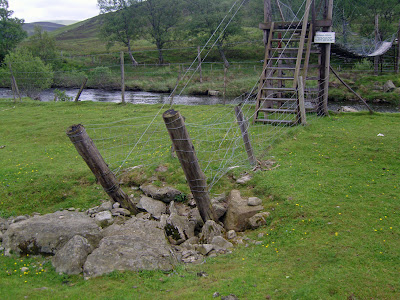 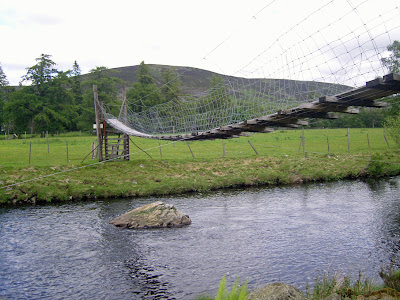 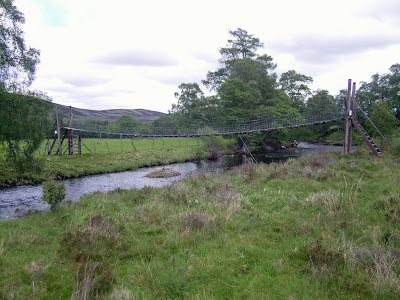 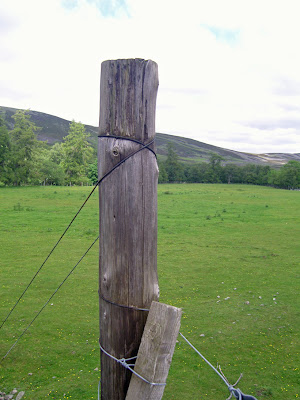 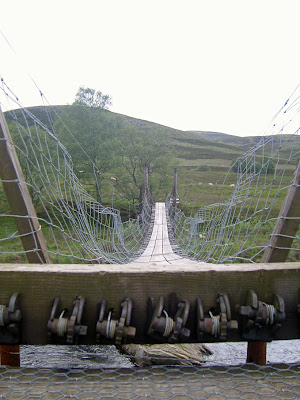 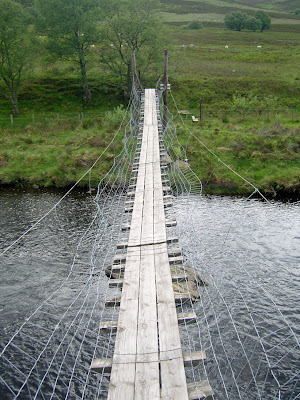 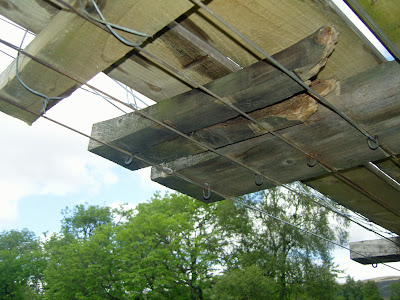 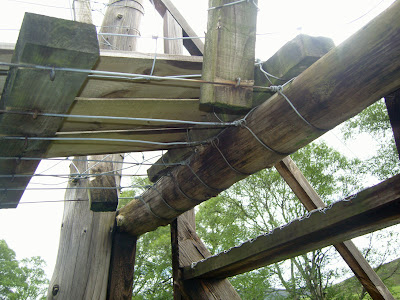 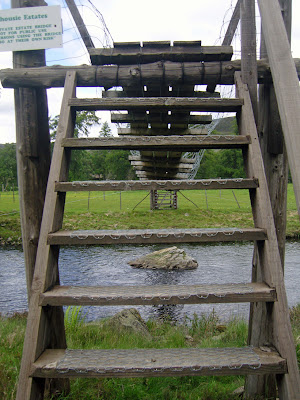 You must have travelled so many kilometres through wild country, including on foot to visit all those bridge sites! A Scottish bridge across the Forth that piques my interest from the historical aspect is the Old Stirling Bridge:
http://www.thesonsofscotland.co.uk/Photos/History/Stirling-Bridge-Plaque.jpg
Very little is known of the original bridge; it was probably a timber structure located near the existing New Old Stirling Bridge.
http://canmore.rcahms.gov.uk/en/site/46195/details/stirling+causewayhead+bridegehaugh+road+old+bridge/
Remnants of stone foundations of the “Old Old Stirling Bridge” were located in the 1990s:
http://canmore.rcahms.gov.uk/en/site/46113/details/stirling+bridge/
Thanks for sharing your bridge experiences with us, David

David, thanks for the kind comments. The Peruvian rope bridge is on the face of it safer than the Invermark one - it is largely suspended from its "handrails", so the centre of mass for anyone crossing it is below the point of suspension. At Invermark, it is suspended only below the deck (the "handrail" wires are not taut), and so the centre of mass is above the point of suspension. This make it feel quite unstable when you cross it, although as it begins to move laterally, the other wires do pick up some force and resist movement.

HP, You are right about the stability of the Keshwa-Chaca bridge. I was privileged to witness it's annual renewal in 2006and to walk across it on the day of its completion. It was much steadier than some other swinging bridges I have visited. Of course, the ropes are made of grass and I'm sure I would feel less secure as the bridge aged.

The Invermark bridge must now be very old? I have crossed it several times but I don't remember if it was there when I lived in the glen over 6o years ago. It is special. Santiago Calatrava it is not!