The final day of our Scottish bridges trip revolved around the bridges of the Justice family of blacksmiths, all built in the period from around 1820 to 1840. Five of their bridges are known to have been built, although the one at Clova Kirk in Glen Clova is long gone. Of the other four, we had already visited those at Crathie and Kirkton of Glenisla. The next bridge is in many ways the most accomplished of them all, at Haugh of Drimmie, near Blairgowrie. 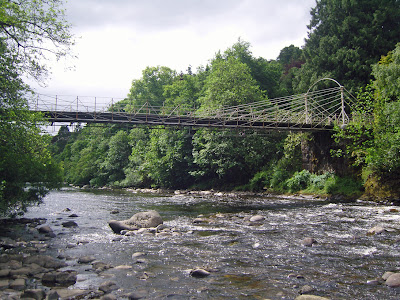 This bridge spans about 32m across the River Ericht, and is 3.2m wide. It is Listed Category A. Its exact date of construction is not known but it was mentioned in the 1837 New Statistical Account of Scotland, with the following description:


"The only other object pertaining to this parish, which I shall mention as a matter of curiosity, is an iron bridge, which Colonel Chalmers of Glenericht, has thrown across the river, a little below his house. The bridge is supported by a stone pillar at each end, from which a direct span, not an arch, stretches across the whole breadth of the river. The bridge is of such wideness as to admit a passage for a carriage, with a foot tract on the side for travellers, the bottom or floor of both of which is covered with gravel to prevent alarm to man or beast. By this bridge, the Colonel has easy and elegant access to his property on both sides of the river, and also to the great road which runs from Braemar to Perth. The bridge was constructed by a Mr Justice in Dundee, and is well worth the notice of strangers."

While this hardly suffices to describe the bridge, it does offer a nice reminder of quite how compellingly strange it must have appeared when first built. In the 1820s and 1830s, a flat span bridge of any dimension was still a tremendous novelty. A few isolated suspension bridges had been built, but girder and truss bridges of any size were still to come.

The Haugh of Drimmie bridge has retained a definite strangeness today. Clearly, its deck has been altered over time, but the main structure seems to be original. It very closely resembles Justice's bridge at Crathie, with amazingly slender pylons, rod stays at a very shallow inclination, and a panoply of transverse and longitudinal bowstring ribs below the deck. Unlike its sibling, it was never strengthened with suspension chains, and also unlike its sibling, it continues to carry vehicles today, albeit with signs at each end declaring a weight limit of 2 tonnes. Given the extraordinary slenderness of many of its parts, particularly the pylon legs, I find this quite astonishing.

It lacks the rag-tag charm of the 1824 bridge at Kirkton of Glenisla, and was clearly a much more polished venture. Nonetheless, many individual features are essentially the same, such as the presence of curled ornamental brackets at the base of the pylon legs, the varied use of through-bolts and external clamps to connect the main span and anchorage rods to the pylons, and the presence of slender arched portals above the pylons.

The bridge deck is constructed in timber, with narrow timber "footways" which with their tall kerbs are an effective way of limiting the live load on the bridge. The kerbs also provide the primary vehicle containment, protecting the weak parapets as well as the hanger rods. Hidden below the deck there are scuppers at regular intervals which allow water to drain.

As with its sibling structures, it's only when you step back and consider quite how tiny the individual members are that you wonder quite how it has survived for so long. I think this is one of Scotland's finest historic bridges, and it deserves to be much better known. 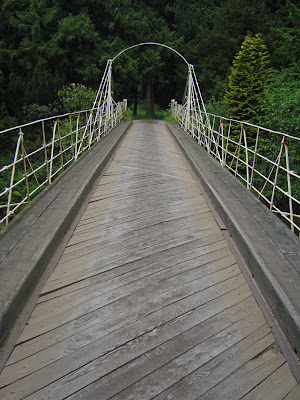 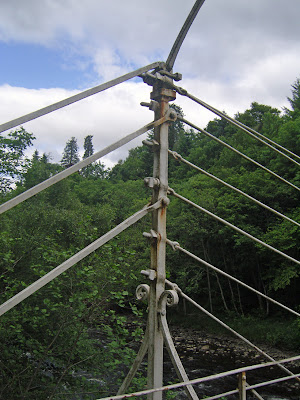 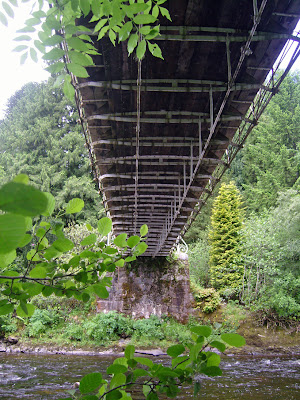 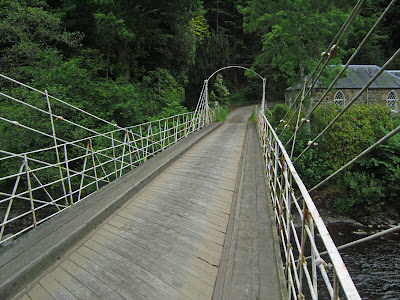 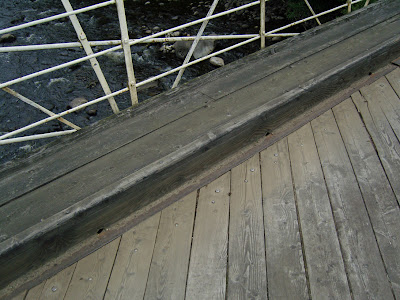 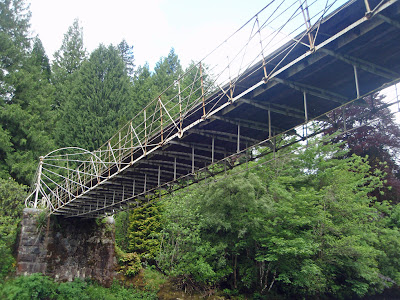 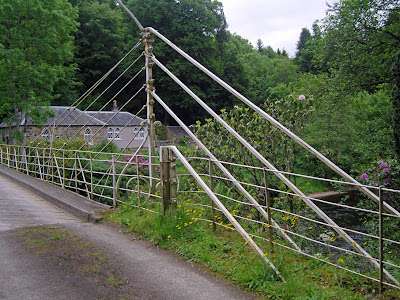 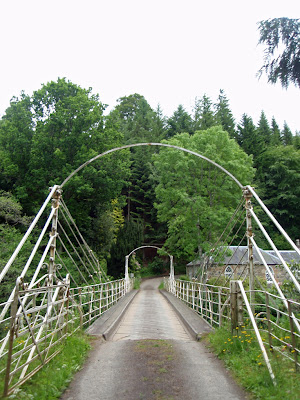 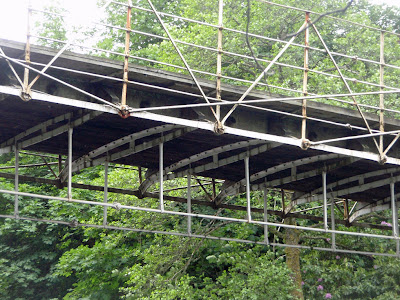 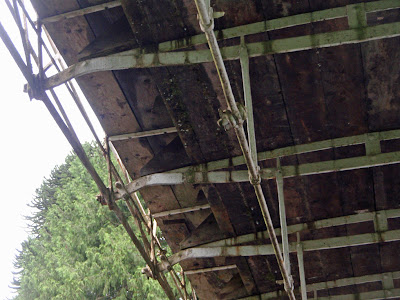 Further information:
Updated 27 September 2012:
See the comments on this post for some very interesting additional information about this bridge.
Posted by The Happy Pontist at 11:03 PM

Very interesting bridge. I wonder how many people could design a bridge this economical nowadays?

The following reference suggests it was built in 1823?


The suspension bridges, designed and executed by Mr. Justice, differ from others, owing to the ingenious way they are constructed ; in my opinion, more strength is also
produced from less iron than in any that I previously knew of. I have recently seen one erected by
him in 1823, for Colonel Chalmers, at Glenericht,
the country seat of that gentleman. The span of
which is 104 feet, the road 10 feet wide, with a carriage way in the middle, and a narrow footpath on each side. This bridge is capable of bearing any
weight that can be put on it ; indeed, the first trial
was seven loaded carts, each drawn by one horse,
so as they could be all on it together.

This bridge is supported by two strong chains under the roadway, each of them proved, before putting up, to carry a strain of 25 tons ; but the principal strength lies in twenty-eight suspension rods, each of them was also proved, before being put up,
to carry 20 tons ; so that the strength is superior in
a tenfold degree to any weight that can go on it.

Notwithstanding the great strength produced, owing to the way it is constructed, there are only 2 tons
of fine iron in the suspension rods, bottom chains, back stays, and every thing else in anyway suspending or bearing the strain of that ponderous weight ; and about 3 tons more of common English Iron, applied, in main posts, at the ends, (to save mason
work,) and the cross beams or joists for supporting
the road- way, and other parts where tenacity is not
required.

All parts of this bridge contribute jointly to the
general strength, as well as severally to that of their
respective places; and any part, except the main posts,
may be taken away at pleasure without weakening
the general structure, more than the mere use of that
part taken away ; which must be of great use in case of repairs being required in the lapse of time, and I
believe the expense was not one third of what a stone
bridge would have cost, although plenty of stone is
to be found on the spot.

Besides bridges for carriages, Mr. Justice has erected a number of foot bridges, some of which are upwards of sixty feet span, and which did not cost more
than L.40, including mason work ; and these not only carry as many people as can go on them at once,
but as many horses. Bridges of the same span, for
carriages, will cost L.SO more, independent of mason
work. These bridges are adapted to every situation, but some situations will cost much less than others.

Wow, that link is a really excellent find, I think you have added something genuinely new to what is already known about this bridge! If it was built in 1823, it is all the more remarkable.

Some pictures of it being redecked here by the aptly named "Strong Bridges Ltd". Looked a lot cleaner then than in your pictures!

Thank you! That takes us almost full circle, since Strong Bridges were responsible for the second bridge of this entire Scottish trip: http://happypontist.blogspot.co.uk/2012/07/scottish-bridges-22-bracklinn-falls.html