This footbridge is a very marked contrast to the one at Swanscombe Cutting that I covered recently. 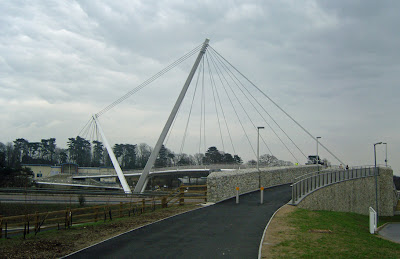 First, it has a silly name, the "Eureka Skyway". I was just going to call it the M20 Ashford Footbridge, as that's what it crosses and where it is, but I've decided to use its official name for the blog post title. It links two retail parks either side of the motorway, and also acts as a gateway to Ashford itself, an indication to motorway users that perhaps something of significance can be found here.

The £8m bridge was designed by Nicol Russell Studios with Jacobs, and built by BAM Nuttall. It was installed in May 2011 and opened in September 2011. There were rumours before it opened that it suffered from "wobble", but I could feel no evidence of that when I visited earlier this year.

Three immediate precedents come to mind when viewing the Ashford bridge: Lancaster's Lune Millennium Bridge (2001), and Newport's City Footbridge (2006) are two. Closer to Ashford, Maidstone's Lockmeadow Footbridge (1999) has a similar form. All four bridges share a resemblance to a giant crane, with twin masts tied together with cables, and a deck supported from cable stays. There are some structural advantages to this arrangement, chiefly that the angle of the cables supporting the deck is steeper, and hence they provide a stiffer and more efficient support. A significant disadvantage is that maintenance is more difficult, as cables are required with no low-level termination, making it more difficult to adjust or replace them in the future. 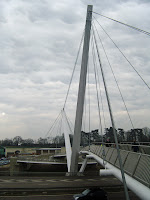 I saw preliminary visuals for this bridge some time ago, and you can find them on the architect's website. I thought it looked quite nice, appealing in its height and slenderness. In real life, I found the sheer scale of the bridge to be much more difficult to accept. The bridge deck is roughly 100m long, with a 67m clear span. The masts are 38m high. It's nowhere near as big as the Newport bridge (70m tall, 145m main span), but it's still a very large structure to span a motorway. The span length is driven by the presence of two motorway slip roads, and a watercourse, forcing the bridge to be much larger than is normally required on motorways.

The bridge looks attractive enough when viewed from the motorway, but as a pedestrian it is quite overpowering. The masts tower far above you, and their angle of inclination makes them loom in a way that I don't recall experiencing with vertical masts. 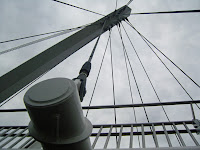 What seems like a simple enough cable system when viewed in elevation becomes not only complex but positively confusing from most other perspectives. This is true of the forestays, but doubly so for the backstays. As well as tying the masts back to anchorage foundations, these also support a secondary deck, which curves below the main deck and provides part of a shallow gradient ramp access to the bridge's north end. The end result is a web of cables with little apparent visual order. 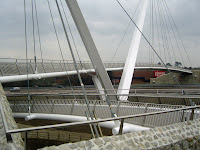 In the main span, the confusion is partly caused by the presence of a set of tie-down cables, two on each side of the deck, which anchor the foremast to the foundations. These are an odd presence on an asymmetric cable-stayed bridge, where normally the anchor cables are only required at the "rear end" of the bridge. Here, I guess the main deck is insufficiently heavy to hold the main masts in place on its own, or they are needed because the masts are offset to the side of the deck, or they minimise movement and vibration in the masts. Compare the Swansea Sail Bridge as an example of a cable-stayed bridge with an offset mast which doesn't need to be tied down in this way (and where the mast has been more artfully shaped). 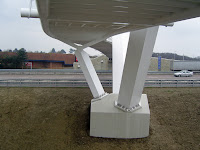 Below deck, the oddest feature is a Y-shaped strut which holds the deck in place, presumably to restrain either vertical or lateral movement, or both. It has a sort of "tacked-on" feeling. My initial thought was that a corbel from the masts would have been better, but it's not clear which mast you would add the corbel too, and what the effect on structural behaviour would have been. The view from below also highlights the somewhat rudimentary details where the cables are anchored to the deck. 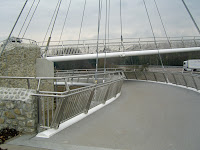 The approach ramps at each end of the bridge are also very heavy, largely because of their height above the surrounding ground. There's a stone-walled ramp at the south end, and an earth mound at the north end, into which stairs and a spiral ramp are cut. Growth of landscaping over time will help soften these, but they weigh the bridge down rather than allowing its slenderness to float free.

Overall, it's a bridge which had the potential to be great, but which is let down by the awkward resolution of many of the details. Notwithstanding the funder's desire for a gateway structure, I found the sheer scale to be oppressive. The bridge at Swanscombe spanned the motorway with delicacy and modesty - the one at Ashford has neither.

I wonderi f you could help out with a disagreement about The Eureka Skyway. (I also feel the name lets it down). My husband thinks the angle of the two masts is set at 90 degrees to each other. I think it is less, about 80. Any help?