I visited Kent earlier this year, and took in a couple of bridges while there. Both are pedestrian bridges spanning over a major highway, but very different in conception.

The first dates from 1965, and spans the A2 highway, which follows the route of the ancient Watling Street. Approached from the east, the road rises up across the landscape before slicing through the hillside in the Swanscombe Cutting, and it's not dissimilar approached from the west. The cutting is therefore at the high point of the road, and the bridge that spans it is a key marker on the route. As a note on the Concrete Bridge Development Group website states, "the scene is set for both drama and beauty".

The bridge was designed under the direction of H Bowdler, County Surveyor of Kent, and J A Bergg, County Bridge Engineer. It was built by Leonard Fairclough Construction at a cost of £17,000. In Bergg's paper covering a number of bridges built in Kent in the 1960s, he reports the cost to equate to £116 per square metre of deck.

The structure spans 48.77m, being 2.3m wide between railings, and 89.5m long in total. The arch rises 7.83m. Triangular abutments are buried in the cutting slopes, approximately 8m tall, which provide combined support to both the arch and the deck arms. 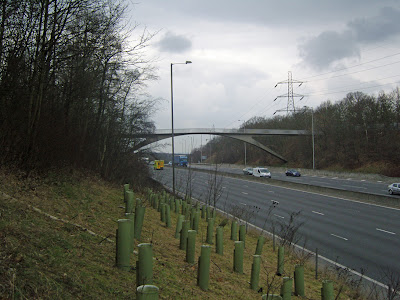 The bridge was Listed Grade II in 1998. I'd be interested to know whether any other bridges built this recently in the UK have been given similar protected status! It certainly seems remarkable, but then, it is clearly a remarkable bridge.

Structurally, the bridge is a descendant of Robert Maillart's 1906 Tavanasa Bridge, a three-pinned concrete arch, with propped cantilevers for the bridge deck. All parts of the bridge taper towards a hinge - the arch members to hinges at their base and crown, and the deck to the support at their ends. At the thinnest points the bridge is a mere 0.36m thick. 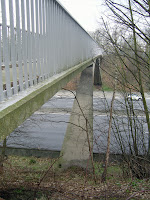 The main deck has a roughly 1m wide central prestressed spine beam, with the deck slab cantilevering either side. The deck is so thin at the arch crown that it entirely disappears into shadow below the deck cantilevers, an effect which is visually a little disconcerting as the visual continuity of the arch soffit can be lost.

It's not an easy bridge to photograph, thanks to the extensive tree growth along the cutting slopes. There's a photo in Bridges of Britain which shows the bridge with bare slopes, which really shows the structure at its best. I can't help but think that if this bridge spanned across a Swiss gorge rather than an English dual carriageway, it would be far better known, and properly recognised in the bridges literature. As it is, even Henry and Jerome's Modern British Bridges, published in 1965 and intended to recognise the best modern bridges of its time, fails to include it. 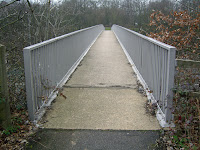 Perhaps the only criticism I would offer of this bridge is a personal one. The parapets provide an effectively minimalist solution, largely eliminating their visual impact on the bridge's elevation. However, they did little to calm my sense of vertigo and exposure while crossing the bridge. How much of this was the normal experience of crossing a busy main road, and how much due to the bridge's setting, I couldn't tell.

Swanscombe Cutting Footbridge is far from the only ultra-slender concrete footbridge built in Kent under Bergg's direction, and hopefully I will get a chance to visit some of the others in the future.

"...whether any other bridges built this recently in the UK have been given similar protected status!"

I know it's not what you had in mind, but the Severn Bridge is of a simlar age and is Grade I listed!

That would suggest the Severn and Wye bridges to be the most recent Listed bridges in the UK, unless anyone can suggest others.

Swanscombe would remain remarkable amongst that company (and it's a far nicer footbridge than Kingsgate).

Ten post-war bridges were listed in 1998 all at the same time, I remember it distinctly as it was a news story in the first issue of Bridge design & engineering that I edited! A few were 1940s and 50s structures, but most were 1960s, although none were more recent than Severn and Wye. The others were: West Footbridge at London Zoo, Aust Viaduct (approach to Severn Bridge is listed separately), Winthorpe Bridge on the A1 in Nottinghamshire, Rhinefield Bridge in Hampshire, River Cherwell Footbridge at Parson's Pleasure Punt Rollers in Oxford, Garret Hostel Bridge in Cambridge, and Wentworth Viaduct in West Yorkshire.

Many thanks for that, very helpful! It sounds like they are overdue for another update ...

From the 60s, the Pennine Way Footbridge over the M62 is probably a good candidate for Listing. Although it dates from the 80s, the Kylesku Bridge in Scotland is also ripe for similar status.