New Civil Engineer magazine has this week found one bridge engineer willing to break cover and criticise Sunderland's River Wear Crossing, an astoundingly bold, astoundingly inefficient cable-stayed design (pictured below) that I've featured on many occasions on this blog. 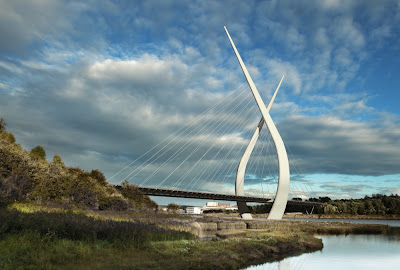 Simon Bourne is the chap willing to put his head above the parapet. He's described as an "independent bridge expert", although until very recently he was head of bridges at Benaim, part of URS. Presumably with independence comes the ability to speak one's mind much more freely. Benaim were the quintessential contractor's bridge designer, expert at means of construction and ways of building bridges more efficiently.

Bourne describes the bridge as "a gross misuse of public money in a time of austerity", and has written to the government to tell them so. NCE report two other engineers chiming in with support, one noting its complexity makes it "completely unnecessary for a span of this length", and the other "just can't believe it's got this far". I'm always suspicious of anonymous quotes, but these echo views I have heard expressed privately by any number of highly experienced bridge designers, including those often associated with landmark bridges.

Bourne's criticisms of the bridge in terms of its efficiency as a structure are entirely reasonable, although long-time readers of the Pontist will find nothing new there as I've critiqued the bridge in far more detail in the past.

I'm far less convinced by his argument that the expense isn't justified by the economic value that a landmark bridge will trigger. He says that comparisons with the Gateshead Millennium Bridge are invalid because it is a city centre bridge, while the Wear Crossing sits in an industrial estate. I can't see how that's relevant - the Wear bridge will be visible from miles around and its value is as a statement of intent, a trigger for investment which creates value through employment. It's not intended primarily as a visitor destination in its own right. Whether that investment will materialise may quite reasonably be doubted, but I don't imagine Bourne can claim to be an expert in the economics of regeneration. I suspect that the real reason he takes this view is simply the traditional, highly conservative bridge engineer's belief that extravagance is essentially immoral, a narrowly puritan perspective which prevents engineers from contributing more meaningfully into wider cultural discussions on the value of aesthetics.

I've discussed in the past how rarely bridge engineers are willing to publicly criticise the work of their peers in the industry. In that respect, Bourne's intervention is a positive thing, as there is far too little debate on the merits of designs such as this. The NCE quote Sunderland's River Wear project director as saying the bridge has been "rigorously designed, costed, admired and backed within the industry and profession", a statement of such deep complacency that it positively demands more critics to clamber out of the woodwork, brandishing angry manifestoes reading "form follows function" and so on.

Unfortunately, Bourne's complaint also falls into the too little, too late type of criticism which comes at a stage in the project where it is largely pointless. It has been clear throughout the River Wear saga that the promoters are wedded so deeply to their vision that they are happy to ignore opinion, whether expert or non-expert. I recall in particular their reliance on a public survey expressing support for a design, when a much larger survey showed that at least half wanted to avoid expense and favoured a "tried and tested" solution instead. Sunderland have had the design reviewed by experts who agree that it can be built. The most serious test of its feasibility will come when contractors' tenders are finally submitted, and we discover whether they share the client's expectations as to what it will cost.
Posted by The Happy Pontist at 10:14 PM

Would love to read the clients evidence based reasoning behind the desicion to spend the 'extra' for this bridge. It can be very valid to spend extra money on easthetics, for one because we have to look at it for the next 100years. But I doubt it is very detailed in this case.

Keep us posted on the tender outcome.

Sunderland's valuation of the economic benefits of an iconic bridge can be found in the documents at http://www.newsunderlandbridge.com/Best%20and%20Final%20Bid.asp

The costs are a bit opaque to say the least. I have written more at http://consult-3c.com/blog/ and sent a letter to the Editor.

So once again our neighbours up the road would'nt see us with the steam off our sh*te, pathetic morons - don't worry because if Sunderland council have anything to do with it then it won't happen anyway.