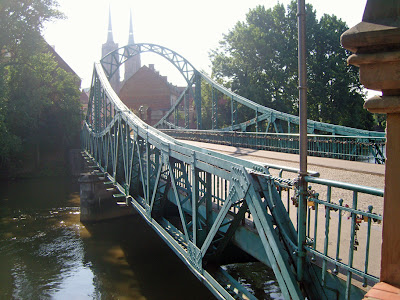 Most Tumski is a bridge over a branch of the River Oder. There has been a bridge here for centuries, marking the boundary between the jurisdiction of the city authorities on one side, and the cathedral authorities on the other.
The current steel truss bridge was built in 1889. It originally carried road traffic, but is now pedestrianised. It was damaged in the second World War, but repaired, and has been extensively refurbished in more recent times. It is illuminated by antique gas lanterns at night.

The bridge's two spans total 52m in length. There is a small skew, although this is not really noticeable. The structural form is clearly unusual. It's essentially a truss structure, although with some of the attributes of a suspension bridge, notably the separation of the top chord from the stiffening truss, where it passes above the central pier. 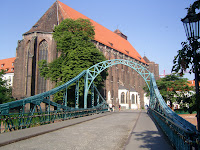 The main verticals of each truss form the sides of a portal gateway, providing much of the bridge's sense of occasion. The portal presumably also serves to stabilise the verticals against lateral buckling.

It's quite remarkable that what is normally seen as heavy and industrial, the riveted steel truss, can not only fit within a historic environment so well, but also become such a romantic bridge. 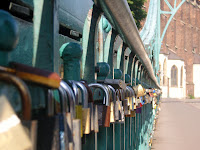 I'm not sure why it became associated with romance, but the bridge is now home to a tradition where couples come to seal their relationship vows. They prepare a padlock to symbolise their commitment, often inscribed with their names or a suitable message, lock it to the side of the bridge, and then throw the key into the river, indicating the unbreakable nature of their commitment (I'm not sure whether Wrocław divorce lawyers have to employ assistants armed with boltcutters).

The bridge is now lined with hundreds of locks, and it's a tradition I believe has spread to other bridges elsewhere in Poland. Tumski Bridge is surely one of the best-known bridges in Wrocław, and possibly my favourite out of those I visited.