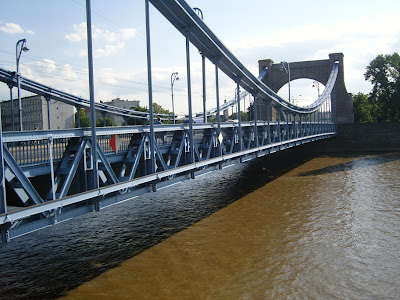 Most Grunwaldzki is one of the most unusual suspension bridges I have ever seen.

It results from a 1905 design competition won by the engineers Robert Weyrauch, Martin Mayer and Alfred von Scholz, and carries pedestrians, vehicles and trams across the River Oder. The architectural design was attributed to Richard Plüddemann. At the time, Wrocław was part of Germany, and called Breslau. The bridge was originally named the Kaiserbrücke, in honour of the last German Emperor, Wilhelm II, who opened the bridge in October 1910. 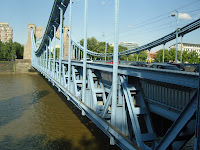 The bridge was severely damaged in the second World War, but rebuilt by 1947. In the process, the appearance was slightly altered, with turrets being removed from the towers, giving them a more modern appearance.

The bridge's arch-portal towers are built in granite, while the 112.5m span is in the form of steel Warren trusses (the horizontal member running in front of the trusses is a support for an underslung maintenance gantry).

What makes the bridge unusual is the suspension "cable", which isn't a cable at all, but a set of riveted steel plates. I'm not aware of any other suspension bridge quite like it. Both the Salzach Bridge in Laufen, and the Tower Bridge in London, have suspension "cables" made from riveted steel, but not in this flat-plate form. Each "cable" consists of four bands, each with up to eight layers of plate. Even the hangers are in riveted plate. 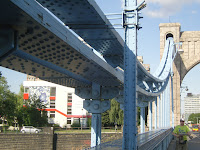 The use of riveted plates for the main suspension system is of course incredibly inefficient, as mild steel plate has a tensile strength several times lower than that of drawn steel wire. The use of wire cables in suspension bridges dates back to the 1820s, and was widespread by the time of the Kaiserbrücke, making the decision all the more puzzling. A few suspension bridges using metal chains were still being built into the twentieth century, such as the 290m Elisabeth Bridge, erected in Budapest in 1905, and the very late 340m Florianopolis Bridge, erected in Brazil in 1926. Nonetheless, the Grunwaldzki Bridge is probably unique. In addition to the low strength of its suspension "cables", it must have been much harder to build than a wire-cable bridge, as the riveted plates will have required temporary support until complete. 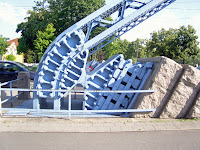 The anchorages are also an unusual feature. In most suspension bridges, the cables are continued at an angle into the concrete foundations or underlying bedrock. On the Grunwaldzki Bridge, they are turned about a stiffened, hinged saddle, such that they enter the ground vertically. This isn't unique - Navier's Pont des Invalides also had a vertical cable anchorage (see page 6 of the link for an image). I guess this offers the advantage that where the anchorage foundation may be prone to lateral movement, it can be buttressed in compression rather than relying on a tension ground anchorage. A diagram available online shows that the anchorage chamber is strutted against the tower foundations for stability. 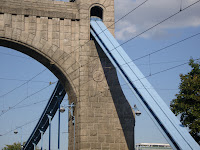 Despite the clunkiness of the engineering, this is an attractive bridge. It is monumental, with a robust impression of strength. At the same time, the blue paintwork lightens the appearance. It is well-detailed: even the lighting columns are in riveted steel in similar style to the rest of the bridge. The towers are massive but not ridiculously so.


It's one of the best known bridges in Wrocław, and rightly so, and with its unusual engineering has a historical significance which is much wider.