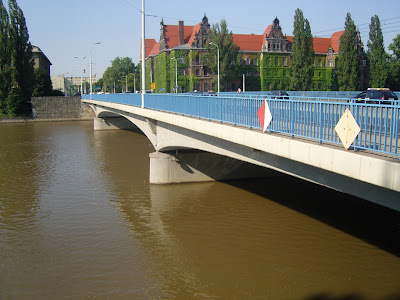 Most Pokoju is the next crossing of the River Oder in Wrocław as you head west from Most Grunwaldzki. The River is crossed several times within the city centre, but Most Grunwaldzki is the last highway crossing to the east for quite some considerable distance.
A timber bridge originally spanned the Oder at this point, replaced in 1875 by the steel Lessing Bridge. This was damaged so badly in 1945 that it had to be replaced, although the new bridge was not completed until 1959. It took its present name, the Peace Bridge, in 1966. The designer was Jan Kmita.
The bridge is a hollow reinforced concrete box structure, with a central drop-in span supported on half-joints from the side cantilevers. It's what is known as a "Gerber beam", after the German engineer, Heinrich Gerber, who patented this system in 1866. Hinges are introduced at what would be the points of contraflexure in a continuous beam. This reduces the overall bending moments required for design (compared to a simply-supported system), while eliminating stresses which might result from thermal restraint or differential settlement. It also makes the structure easier to analyse, which was perhaps the major advantage when the idea was first introduced.
Of course, the major disadvantage is that the half-joints are prone to deterioration (e.g. from de-icing salts) while simultaneously being difficult or impossible to inspect and maintain properly: the Laval Overpass collapse being a relevant case history. 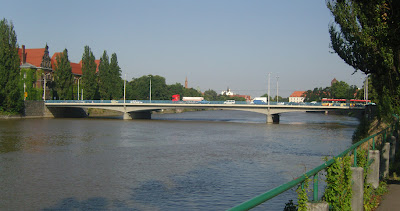 It's certainly not an unattractive bridge, with a relatively slender outline and simple, straightforward lines. The only element which strikes me as odd is the use of little mini-corbels to support the deck cantilever above the pier positions, which I can't quite see the point of, even considering that this is where the lighting columns sit.
Further information:

I am doing a report on Half-Joints in bridge decks for University and was wondering if you knew any good books or website that may provide some information on the history of them.