I recently had some time on a trip to Leeds to see a few bridges, both in the city and nearby.

The first bridge I visited was the Stanley Ferry Aqueduct, which is claimed to be the largest cast iron aqueduct in the world, and possibly the first iron aqueduct to have been supported from suspension hangers. It is both a Scheduled Monument and also Grade I Listed. This photo makes it look much smaller than it really is: 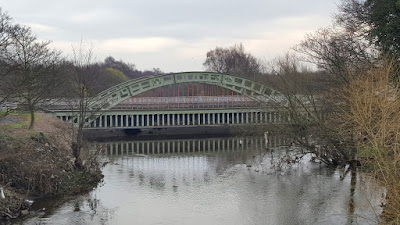 Built in 1839, the aqueduct carries the Aire and Calder Navigation, a canal, across the River Calder. The structure was designed by engineer George Leather (probably with his son John Wignall Leather), and comprises a cast iron trough suspended via wrought iron rods from two cast iron arches.

Leather had originally developed a multi-span design, which met with the approval of Thomas Telford, but it was eventually decided to build a single span structure, to reduce any hindrance to water flow in the river. As built, the arches span 47.2m across the river, although the canal trough is longer at around 50m. The trough is 7.3m wide and 2.6m deep, containing some 955 tonnes of water. This phenomenal load is carried on a series of cast iron cross-frames, supported from the hanger rods. 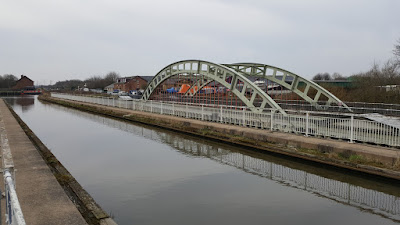 None of this can be seen directly, as it is all hidden behind decorative colonnaded fascia panels. The bridge abutments are also hidden, disguised behind faux-Greek pavilions (you can only see the tops of these in some of my photos). The support arrangement is show in this diagram (taken from Broad's paper, see link below): 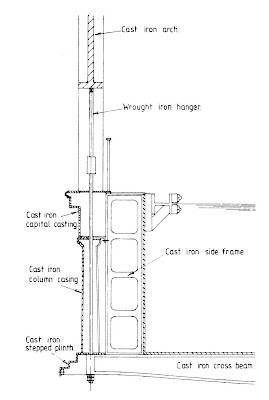 The two arches are also cast iron, each cast in seven segments, with each segment having four Vierendeel-type openings. The arch ribs taper from 1.83m deep at the crown to 3.02m deep at the supports. In contrast to the rest of the bridge, the form of the arch is surprisingly modern, compare for example the Taunton River Tone bridge. 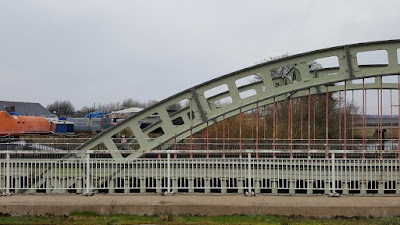 The bridge was extensively refurbished circa 1986. Impact to the sides of the trough from large canal barges was repaired using the Metalock process. The hangers were in some cases highly corroded, and found to be carrying uneven loads (ranging from 5 to 25 tonnes), so several hangers were replaced, and all were re-tensioned. The bridge was completely repainted.

It's a magnificent structure, but not an easy one to see well. It can be viewed from a road bridge to the west, or from a field and canal towpath to the east. Closer viewpoints on its west side are within private property, and I could not get access.

If you want to see how the bridge looks from close-up, there are some good photos at the Stanley History website linked below.

Immediately to the east of the bridge, a second aqueduct was built in 1981. This is a huge, deep prestressed concrete trough structure. It resembles a dam more closely than a bridge. 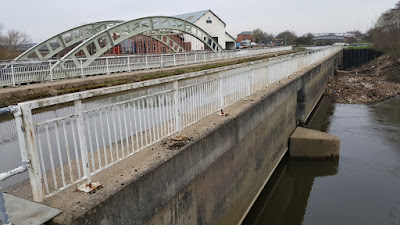 East of that there is a "trash screen footbridge", which provides access along the canalside but also helps to trap the great piles of debris which wash down the Calder. All three bridges have surprisingly little clearance to the river below. When the Calder floods, the aqueduct is nearly entirely submerged. 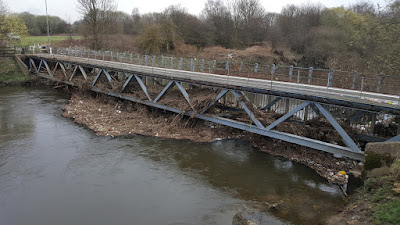 It's a shame Stanley Ferry Aqueduct isn't more accessible for visitors: it is a one-of-a-kind structure. The Canal and River Trust held an open day at their adjacent workshops back in 2016, from where great views are possible, and perhaps they will do so again.