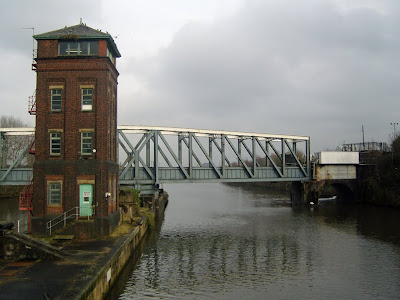 At last, the end is in sight. This post covers the penultimate bridge(s) I visited on my mini-tour of Greater Manchester, and it's the only one so far chosen for its historical significance rather than its modern design.

There are two swing bridges over the Manchester Ship Canal at Barton, a road bridge and an aqueduct. This post is titled after the aqueduct, because it's clearly the more unusual structure: how many moveable aqueducts are there, after all? (In the UK, the Falkirk Wheel and Anderton Boat Lift are the only others that come to mind, suggesting that Barton has the only swing aqueduct). Both structures are Listed Grade II*, which is a recognition of major heritage importance.

The Manchester Ship Canal follows the line of what was once the River Irwell. The river was originally bridged at this point in 1684 by a masonry arch bridge. This bridge was supplemented in 1761 by James Brindley's Barton Aqueduct, a three span stone arch bridge carrying the new Bridgewater Canal above the river. Both bridges were removed at the beginning of the 1890s to be replaced by the current swing bridge structures, which opened in 1893.

The swing bridges were designed by Edward Leader Williams, James Abernethy and William Henry Hunter, with the steel structure built by Andrew Handyside and the opening machinery by Armstrong Mitchell & Co. Williams had already completed the Anderton Boat Lift, and determined that the aqueduct could be constructed as an extended water tank, sealed at the ends prior to rotation, and swung while full of water.

Both bridges are riveted mild steel top-braced truss structures, although the aqueduct is largely the same height along its length, while the road bridge has a tapered profile with a more obviously curved top chord.

The aqueduct is 71.5m long (Wikipedia has incorrect details), and weighs about 650 tonnes, with a further 800 tonnes of water held in the deck trough. The road bridge is 59m long and weighs 660 tonnes. Both bridges are turned by hydraulic (water-powered) engines, and originally had "centre press" hydraulic jacks in the pivots intended to relieve pressure on the roller supports during operation, although these are no longer used.

The water is retained when the bridge opens by swing gates at each end. In the closed position, a U-shaped rubber wedge is allowed to sink downwards into the gap between the bridge and the approach channel, providing a seal.

Neither bridge is in any way a beauty, but the aqueduct in particular is clearly of historic significance, and possibly unique. I didn't get to see them open, unfortunately.