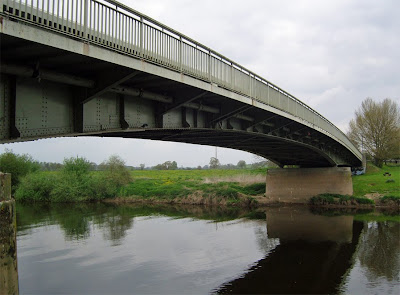 The bridge over the River Severn at Upton-upon-Severn is the most recent of several structures at this site. It's the only crossing of the river for some distance upstream and downstream, and although Upton is now a somewhat quiet town, it must once have been an important centre for trade.

It isn't known when a bridge first replaced a ferry at Upton, but a wooden bridge was present when John Leland visited in 1539. By 1576, work had started on a stone bridge, but this was not fully completed until 1609. One span of the bridge was destroyed during the English Civil War, but later repaired. In 1852, the entire structure was washed away by floods.

Two years later, a new bridge was completed. This had four wrought iron spans, the furthest west of which could be retracted onto its abutment to allow taller vessels to pass. The opening procedure was not quick, and in 1882 the retractable span was replaced by a swing span, pivoting on the abutment.

Once into the motor age, it was apparent for some time that the swing bridge was unsuitable for the new loads it had to bear. In 1935, tenders were invited for a new, electrically-operated swing bridge, but the prices received were unacceptably high. In 1940, the present bridge was designed by Worcestershire County Council (county surveyor and bridgemaster B.C. Hammond), approximately 100m upstream of its predecessor. The contractor was Thomas Vale & Sons Ltd, with the steelwork fabricated by Horseley Bridge & Thomas Piggott Ltd.

The abutments from the old bridge remain, and the line of the former bridge is clearly visible in the Google and Bing aerial photographs linked below. There is an associated viaduct to the east over the Severn flood plain, which was built in 1940 of reinforced concrete, but recently rebuilt.

The new river bridge has three spans, with a main span of 200 feet (61 metres), keeping the piers out of the river and reducing impediment to flow. It was built at a higher level than the original bridge, a vital decision given the Severn's propensity to flood (see the images at SABRE, linked below). It was reported to be a larger version of the 1935 Jubilee Bridge built at Fladbury, but the latter bridge has girders only below deck level. 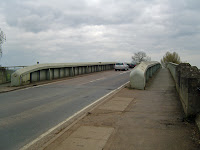 Upton-upon-Severn Bridge is unusual amongst highway bridges in having girders which extend both above and below the deck. The "half-through girder" design is common on rail bridges, where it minimises the depth from the rails to the underside of the bridge, in turn minimising approach gradients and disruption to existing highways. At Upton, this solution was presumably chosen to minimise the level of the roadway, reducing the cost and extent of the approaches. 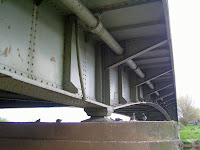 Although unconventional, it's clearly not unattractive, and the bridge gives the impression in elevation of being more slender than it really is. The shallow arched profile disguises what is a three-span semi-continuous girder - continuous over the piers, with cantilever arms supporting a suspended middle span via half-joints. 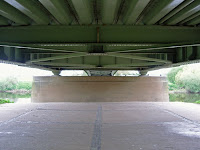 The footways are supported on stiffened steel plates, while the road deck, with its heavier loads to carry, relies on a steel troughing deck.

The main girders have very large vertical stiffeners at frequent intervals, particularly visible on their traffic face. Sizeable stiffeners are required in a half-through bridge to provide "u-frame" action, preventing the top flange from buckling sideways in the parts of the bridge where it is in compression. However, with the half-jointed bridge construction, there will be very little significant compression in the top flange, so it's less clear what purpose these stiffeners serve.

The girders have a hat-shaped top, which is non-structural and presumably there to discourage people from walking along the top of the girders.

A plaque on the bridge incorrectly attributes the building of the bridge to Worcestershire County Council, and also states that the bridge was "one of the last of riveted construction to be built in England". In fact, riveting only died out some two decades later, still being used on bridges such as the Barton High Level Bridge (1960), Runcorn Widnes Bridge (1961) and Thelwall Viaduct (1963).