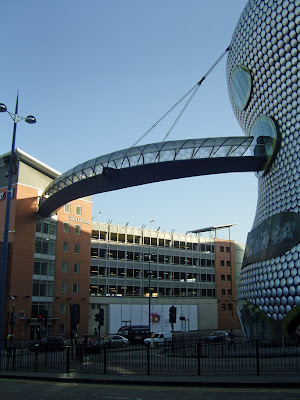 The now-defunct Future Systems were a firm with a very distinctive architectural style, a cross between sixties day-glo and 21st century blobitecture. They were never noted for their bridges, indeed other than the subject of this post, the structure at West India Quay may have been their only other completed span. 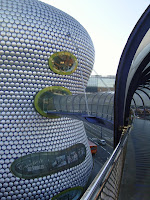 The bridge at the Selfridges store in Birmingham is little more than a punctuation mark bookending the utterly dotty enterprise that is the building itself. It connects Selfridges to a multi-storey car park across the road, and so is effectively one of the shop's main entrances, but it still seems very much like an afterthought.

The Selfridges building, which has a fascinating interior with a lovely atrium, is somewhat intransigent on the outside, with its silver-speckled mass offering little idea of its layout or purpose, with no windows and a minimum of other openings. How do you use a bridge to create a gateway into such a place? 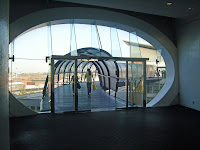 The pedestrian bridge which was built studiously avoids that question, proferring an appendage that seems barely integrated with the building, and which, once crossed, presents a blank wall behind which the department store's 3rd level is hidden. 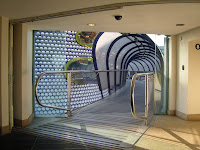 Its 37m span comprises a steel box girder, fabricated from a series of warped flat plates and segments of bent steel tubes, and supported roughly in the middle from a Y-shaped arrangement of cable stays. It is curved in plan, giving the visitor an expectation that the initially obscured view will gradually open up, only to dash it with that unhelpful blank wall.

Structurally, it is neither innovative nor hugely interesting, although clearly it must have been a complete bastard to assemble. 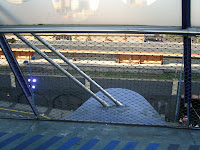 Steel arches spring from the box girder at varying angles, carrying a polycarbonate canopy, which is dirty but not yet discoloured (a fate which appears to await most similar materials). The canopy is combined with a stainless steel mesh parapet system, which must have been a brave choice. This kind of mesh is generally chosen for its extreme immateriality, and this high above the roadway it would have been easy for it to appear simply too insubstantial for comfort. In combinatio with the see-through canopy, however, it works well.

The bridge was designed by Future Systems and Arup, and built by O'Rourke. 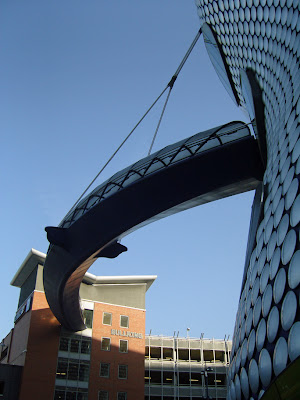