The space of all possible bridge shapes: Part 3

In the last two posts, I introduced Stephen Wolfram's idea that it may be possible to use modern computational algorithms to develop entirely new structural forms for bridge, and discussed how difficult it might be to work out whether any of them are actually better than what we design already.

A more coherent idea of the problem can be seen in the example truss forms that Wolfram generated to illustrate his article.

Would any of these offer any improvement on a more conventional truss design? Perhaps there is a greater robustness, but it is unlikely the benefit-to-cost ratio is anywhere close to what can be achieved by simply using a conventional truss form with stronger individual members.

It's a classic case where a specialist with little or no familiarity with another field (in this case, bridge engineering) thinks they can bring some special insight which others are blind to. It's something seen frequently in evolutionary biology, where criticism of neo-Darwinian theory generally comes from biochemists or (sadly) engineers with an essentially shallow understanding of the topic.

However, I wouldn't dismiss Wolfram entirely. There's little doubt that bridge engineers are highly constrained by habit - their own design experiences, and the traditional forms which have calcified into the standard processes of bridge fabricators. Often, new bridge concepts are dead-ended by the inability of steel and precast suppliers to invest in new equipment and technology. Even where new technology is brought in, as with the robotic welding more commonly seen in Japan than in North America or Europe, it is applied only to a very specific problem (e.g. welding of orthotropically stiffened steel plate), rather than to more radically expanding the range of what can be built economically.

As ever, footbridges offer an area where designers can experiment with smaller economic consequence, and are often encouraged to do so by promoters' ambitions. I'm quite confident there are ideas out there in academia, of which Wolfram's is just one, which are underused (or never used) by designers even in this most adventurous of bridge-building fields. 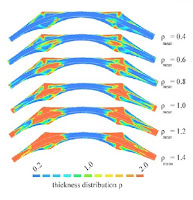 One field which is just about making it into the "real world" is that of topology optimisation. This has been used to show that the theoretically ideal catenary cable is not a single cable but a multi-stranded Hencky net,
and there are various other examples online relating directly to bridge engineering. One paper documents its application to the design of the Knokke Footbridge (pictured, right), which has been featured here previously. This shows the use of computer processing to progressively optimise steel plate thickness (or determine where it can be omitted), something that could have wider applications not just in optimising existing forms but also in generating new ones.

Was Wolfram right that we will see entirely new bridge forms which surprise us in their novelty and apparent randomness? I doubt it, but I do think there's plenty of scope to take use some of the methods discussed here to take a fresh look at bridge designs now and in the future.
Posted by The Happy Pontist at 9:58 PM

Dear HP,
I really enjoyed your most recent postings. It was nice to step back and see bridge design from such a different perspective.
Earthquake engineers may have a similarly warped point of view since we are concerned with a bridge's resistance to lateral (not vertical) loads. In fact, we prefer to isolate the bridge from the ground and design it for displacement.
If a bridge's ability to displace laterally was it's most prized quality, what would be the ideal bridge shape?

That's a tough question, one to which I have no immediate answer!