I did a short series of posts on bridges encountered in Worcestershire last year. I have three stragglers, further bridges in the area which may be of interest, of which this is the first.

A canal was opened between Birmingham and Worcester in 1815, shortening the route for freight barges between the manufacturing centre of Birmingham and the River Severn. Within a few decades, railways were taking over as the principal means of long-distance transport, and a new railway from Worcester to Hereford was built in about 1860. Its line crosses the Worcester and Birmingham canal at Lowesmoor, in Worcester.

The railway had to cross both the canal and the narrow roadway of Westbury Street, two very different spans. It's not clearly recorded who designed the railway bridge, but Pevsner's guide attributes it to Charles Liddell, who was the Engineer with overall responsibility for the railway line.

Liddell was clearly familiar with metal bridges, having previously accepted Thomas Kennard's design for the trussed Crumlin Viaduct on the Newport, Abergavenny and Hereford line. However, a brick bridge was chosen at Lowesmoor. 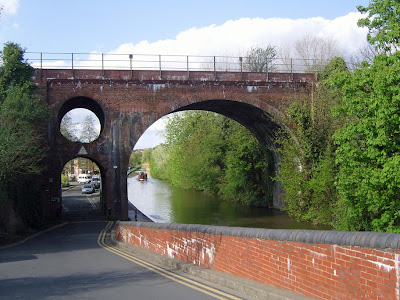 I'm guessing the unusual arch form resulted because a single span over both canal and roadway would have required a fairly shallow arch rise to avoid encroaching into the roadway headroom. This would have led to greater arch thrusts and more expensive foundations. The twin span arrangement which was built is charmingly eccentric, entirely because of the presence of a large oculus above the small roadway arch.

The Pevsner guide already linked suggests that the round hole was to reduce the weight of the bridge, as was famously done on the Pontypridd Bridge, although the saving at Lowesmoor must have been small. A greater saving in weight could have been made by extending the roadway arch up to the full height of the bridge. However, the thrust from the canal span arch at a higher level would have unbalanced the central pier, requiring a strut at the pier's mid-height. The circular hole may have resulted from a combination of these considerations - saving weight while ensuring the arch forces had load paths in the right places. 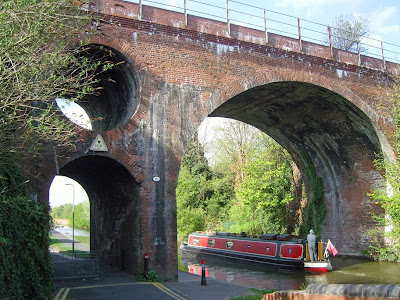 The result is not a spectacular bridge, or even one which is especially ingenious. However, I've never seen another bridge quite like it, and it definitely has charm.

Posted by The Happy Pontist at 9:59 PM

Hi HP, great bridge, it reminded me how a simple design is often the best.

It also left me a little jealous...