This contest was run by Richmond Conservatives to try and find a better design than an off-the-shelf Network Rail structure. It has been won by a local Richmond resident, Stephen Speak, who beat seven other shortlisted designs. I discussed the contest in a previous post, so follow that link for more details on the bridge, which provides access across a railway at times when the adjacent level crossing is closed. Click on the image below for a full-size version of the winning entry. 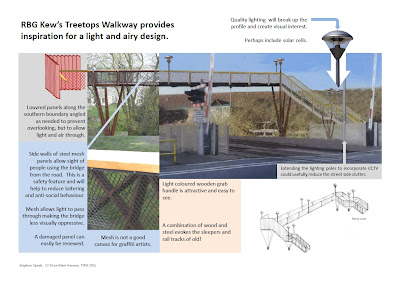 It would be interesting to know what else was entered - this was a contest aimed at engaging local amateurs, rather than professional bridge designers. Reportedly other designs included a curved bridge deck, solar powered lights, and laser-cut metal panels.
The winning design essentially adopts the geometry of the previous solution, probably unavoidable given the highly constrained site, and strips out Network Rail's traditional flat steel plates in favour of something more transparent. Essentially, it's based directly on the treetop walkway at Kew, with a lightweight steel truss structure supporting timber handrails and with mesh infill panels.
This offers a number of advantages over the standard solution, chiefly in removing all the space for vandals to spray graffiti, but also in the improved appearance and surveillance that the more transparent approach facilitates. The major disadvantage is that doesn't comply with Network Rail's parapet standards, which require all pedestrian parapets to be solid panels, without any holes at all, let alone a mesh. It would be nice to think that Network Rail would be willing to depart from their normal practice, but they are notoriously rule-bound and averse to setting precedents in this way.
The design simply dispenses the overhead cage which featured in the original solution, which was probably the most unpleasant thing about it. Privacy for an overlooked garden is provided by a series of louvred slats, allowing light and air through but eliminating direct views, and again this is clearly an advance over the flat plates which served the same purpose on the previous design.
The design won't win any awards on visual grounds, but seems to have focussed on the key issues of security, vandalism, and practicality which must be of greatest concern to the body actually paying for the bridge, Network Rail. Assuming the designer is a non-engineer, I think he's done pretty well.
Posted by The Happy Pontist at 9:31 PM

In Czech rep. we have meshed parapets, but then you need cantilever barrier to make impossible, that people will pee on track (obviously it's only in case of electric traction)

Yes, cantilever barriers are used in a few European countries. I've never seen them in the UK, I suspect the railway authorities are worried that people would climb onto them.

Yes, I think the designer (who used to be treasurer for a Kew Gardens charity) and the community are both well aware of that.

Here are my comments on this footbridge: it's on the wrong side!