This is something of a mickey-mouse contest, but in case any of the heavyweight bridge designers who read this blog want to pit their wits against an army of schoolchildren and pensioners, you should pay a visit to http://rpnkconservatives.co.uk/

The site, in Richmond, Surrey, has an existing level crossing, and it is proposed to build a new footbridge to prevent children and others from taking risks crossing the railway. A standard Network Rail design has been proposed, in its rabbit-cage variant.

This is a half-through girder bridge with two metal girders doubling as parapets. It has a mesh cage across the top which is either there to prevent people dropping concrete blocks on trains, or to create a climbing frame for foolhardy yobs (take your pick). Why they want the cage I don't know - there are plenty of similar bridges without one, and I would always advocating retrofitting one in response to a real problem rather than anticipating one that may never occur.

It's clear from the planning drawing that the site is highly constrained, with even the standard design not quite fitting into the available property boundary. However, it's an awful bridge design (see picture, below) and it's great to see residents agitating for something better. 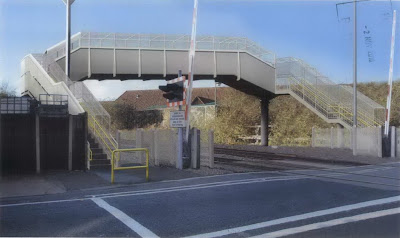 The bridge has already received planning consent, albeit seemingly against the advice of the local planning officer.

So, the local Conservative Association has invited entries to a design contest, by 22nd April, to see if anyone can come up with something better. Anyone can enter, there are no constraints on what information is to be submitted (although I'm not sure whether the back of a fag packet can be emailed), there's no prize, and the winner is not guaranteed any subsequent design work. Designs will be exhibited locally and a public vote will help choose the winner.

I think it could be fun. Instead of a cage for the bridge users, how about tall posts from which wealthy financiers could be suspended? That might do well in the popular vote, at least.
Posted by The Happy Pontist at 8:50 PM

Local Guardian says "The competition is open to everyone and should only address the appearance not the structure of the bridge" sad news.

I'm sure Network Rail have no money available at present for a more expensive form of structure, but public pressure can and does change the game - possibly by forcing the local council to contribute some funding towards something better.

But the heavyweight designers who did submit entries lost out to the amateur in the public vote!

I am keen to know more - I have found the winning design online, are there details of the other entrants?

Yes. See here for one of the runners up:
http://radnorbridge.blogspot.com/2011/05/north-sheen-footbridge-competition.html