Plans have recently been announced by Hungary's development minister Tamás Fellegi for a new pedestrian bridge across the Danube near the National Theatre in Budapest. It would form part of a wide-ranging series of new developments, the New Szechenyi Plan, but doubts have been expressed by Budapest's mayor as to where the money to build it would actually come from. 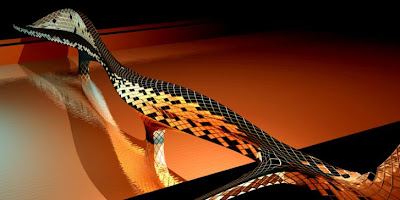 Initial design proposals have been prepared by Hungarian architect József Finta, who from the images below seems to be suffering from a definite case of Zaha-Hadid-envy (particularly for her firm's Zaragoza bridge-pavilion). The proposal is for an enclosed bridge incorporating shops, restaurants and cafes, and links to a convention centre. There have been a number of proposals for inhabited bridges with similar features, to be funded by developers, but it's unclear whether the land values would justify it in Budapest, or whether the impact on river-side views would be acceptable. 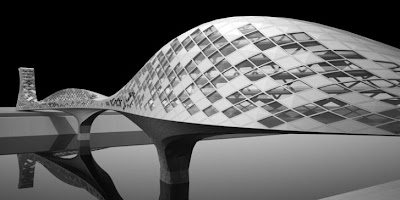 Finta suggests that the bridge could be named after János Bolyai, a 19th-century Hungarian mathematician known for his work in non-Euclidean geometry. 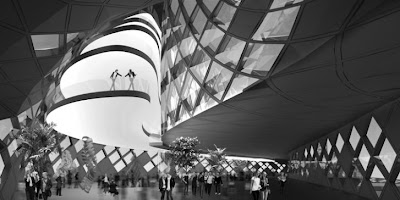 Posted by The Happy Pontist at 8:36 PM

Definitely a bit of bridge envy going on there!