The slender trestle-like supports suggest otherwise, but this is a post-tensioned concrete bridge. The judges felt it had the civilised mood of a Victorian pier, but lacked drama.

This was described as "a very attractive proposal ... graceful and elegant", but I can't see it myself. The fanned support legs are like an attempt to make a Brunel timber viaduct out of knitting needles.

Compared to many other designs that Bednarski has been involved in, this is a very straitlaced bridge. It's not so modest as to be austere, but nearly so.

The judges commended this bridge for making "so many of the other entries look contrived and overdesigned", but it's no surprise to see simplicity commended without being rewarded. 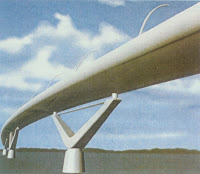 Apparently, this second Foster/Arup design only just missed out on being shortlisted, although from this image at least I think it looks pretty awful, with no real cohesion between the Y-shaped piers and the deck structure. Compare the same design team's subsequent design for the Millennium Bridge, where a very similar pier design was rotated 90° and deployed with far greater success.