The competition to design a crossing of Holes Bay near Poole, held in 1997, was without doubt a defining event. Few British bridge design contests before or since have attracted as much attention, nor had such a disappointing conclusion.

As I explained in my recent post about the later Poole Harbour Second Crossing, there has been a desire to create a second bridge across the harbour at Poole for many years. The idea for a competition was announced in 1994, and promoted by the Highways Agency, who along with their parent body the Department for Transport were probably still smarting from the widespread criticism that had been levelled at the Queen Elizabeth II Bridge's poor aesthetics, and the process by which it had been procured. The Royal Fine Art Commission had subsequently challenged government clients to procure bridges of better visual quality, suggesting a number of different forms of design competition which could be used.

The Highways Agency identified the Poole scheme as one well suited to a bridge design competition, and invited open entries. 99 submissions were received, from 62 teams including many major names. The entries were exhibited in early 1997, and also presented in a supplement to the New Civil Engineer and Architects' Journal magazines (from which I have sourced the vast majority of my information and images).

The competition was organised with a seriousness which has been rarely repeated in this country. Judges included a mixture of architects and engineers, including the renowned designer Christian Menn. Entries were initially assessed anonymously, with reports on each team's experience only being presented when a shortlist of 9 entries was identified. The shortlisted entrants made a more detailed second stage submission, and were interviewed, before a final 3 designs were selected, and again more detail requested. All three finalists were paid £100,000, a remarkable decision for the time and one it would be astounding to see repeated in the UK today for anything other than a very major structure.

The wide Holes Bay site was (and is) environmentally sensitive, and designs were sought which were "world-class", and would enhance rather than spoil the setting.

The winner was undoubtedly a fine choice, but despite all the expenditure and effort (particularly by the many design teams), the entire scheme was dropped following a change of government. This eventually led to a switch to a less environmentally sensitive, and much shorter hence less expensive route. I've covered what happened in my previous post.

As there were so many entries, I will have to split them across several posts. I'll cover the finalists first, then the rest of the shortlist, the various commendations, and then the remainder.

The winning design was an impressively minimal multiple span cable-stay bridge, with very slender A-frame masts and an equally slender deck. The twin horizontal cables connecting the mast-heads are key to achieving this slenderness, always a challenge in a bridge of this sort (compare the various and very different solutions adopted at Rion-Antirion, Millau, Mersey Gateway, and Forth, for example).

The slenderness does lead to a complicated construction sequence, with temporary foundations and stays required to stabilise the various masts until the overhead tie cable is in place. The designers apparently considered a "ship-in-the-bottle" method of erection, which would have been spectacular if adopted - assembling the masts lying down and then pulling them all up in a single operation.

"We felt we wanted to tiptoe across the bay", said the design team. 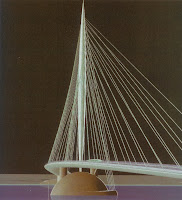 The cable-stay mast is 150m tall, and it's odd that this was a finalist because the judges explicitly criticised several similar designs for being out of scale to the environment. The "skylon" style mast is offset from an s-curved deck, and would have been a steel tube up to 6m diameter at mid-height. There's no real structural rationale for such a gargantuan structure, as the required navigation channel is a mere 20m wide.

The use of tubular steel frames for this most modest of the finalists is a concept explored on several other designs by SBP, who had developed an expertise in simple cast-steel joints. Some of their other bridges of this type make the supports more explicitly tree-like, although the less ostentatious form chosen here seems to me to be well-suited to the site. It would have been simpler to build than either of the other two finalists, but clearly lacked the wow-factor that the judges were looking for.