Okay, another batch of the entries to this 1997 bridge design competition (see previous post for full details). This time around, I've got the submissions which were shortlisted, but not amongst the three finalists.

The team that won the contest also prepared two more entries. One, for a concrete box girder, was never submitted, but their second entry, for a steel truss structure, also made the shortlist. It's not apparent from the images, but a key element in the design was the sleeved pile design, which balanced the need to provide stiff support to the deck against the need for flexibility under thermal expansion.

Calatrava's entry was similar in principle to his unbuilt design for the East London River Crossing, with a 250m span steel arch tied back to the deck via inclined struts. It's hard to see how it would have made sense at Poole, requiring massive temporary support during construction (a topic not even mentioned in the competition report), and making no real attempt to respond to the very different context. The judges also criticised the way the arch ribs change direction at deck level, which does look awkward. 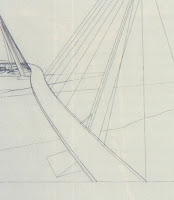 As with many of the entries, the structural form seemed to proceed from a purely internal logic, rather than making a response to the challenges of the site. This one is essentially a footbridge design expanded in scale, with 120m tall pylons.

Hampshire went for a causeway with a small bridge span, rather than a bridge. It's always good to see some lateral thinking, but when it departs so much from what the client has in mind, it's rarely likely that they're ready to change their approach so radically.

The design exploits a system that was much ballyhooed at the time but has never really seen much use. The structure is a steel space frame hidden inside a composite plastic enclosure, designed to reduce exposure to weather and hence reduce corrosion, cutting maintenance costs. Despite extensive promotion, it never caught on, and in the bridge design competition context was even less likely to succeed as the enclosure system is inherently linear and maladapted to structural expression.

This is perhaps my favourite of this batch, with the sinuous and slender arches achieving the skimming stone profile that a few other entries aspired to but didn't deliver. The slenderness of the arches is achieved by adopting a stiff deck, which is a twin-cell prestressed concrete box girder. One disadvantage of the support solution is that it may not look so effective at low tide.