The saga of the proposal to build a new bridge across the Harbour at Poole is a long and partly disappointing one. Some very early studies were carried out in the 1980s, but in 1997, a major open international bridge design competition was held for a fixed bridge across Holes Bay. That contest was won by Dissing + Weitling with Flint and Neill and Ramboll, who had submitted a proposal for an elegant £26m multiple cable-stayed structure.

A change in government led to the Holes Bay scheme being axed in 1998.

I'll cover the 1997 competition some other time, but this post will just address the second competition held some years later.

After the failure of the first scheme, the local authorities then spent some time reinvestigating routes and bridge options, before settling on an intention to build a much shorter, landmark opening bridge, supplementing the existing Poole Bridge. A fresh design competition was held in 2002, with four teams invited to submit entries.

The requirement is for a bridge which will open frequently, as many as 3,000 times every year. The span is not especially ambitious, as the channel width was already limited to 19m by the existing bridge.

The winner was announced in December 2002 as Gifford with Wilkinson Eyre, although the protracted planning process meant that their design didn't receive planning consent until August 2006. Further delays meant that the bridge project was tendered in October 2009, with construction beginning in May 2010. The main contractor for the £18.5m bridge is Hochtief, with the opening structure being fabricated by Cleveland Bridge. Their mechanical designer is Eadon Consulting. The bridge is due to be complete in February 2012. 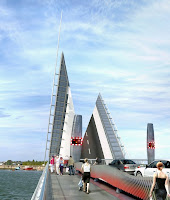 The winning proposal is for a twin-leaf bascule bridge called the Twin Sails Bridge. Although it just satisfies the minimum clear span of 19m, it's easy to see why it offers a visually striking, iconic solution. The twin leaves are triangular in shape, and have a clear resemblance to sails when raised. Indeed, I'd say it's as remarkable in its rethinking of moveable bridge convention as the Gateshead Millennium Bridge, which was of course designed by the same team of Gifford and Wilkinson Eyre.

At 19m, a single-leaf bascule would have been straightforward to achieve. Twin leaves require complex interlocking mechanisms if load transfer between the leaves is required (and it's highly desirable for structural efficiency). The interlocks are considerably more vulnerable to the effects of dirt, debris, thermal expansion and distortion than a single-leaf bridge, which can be made tip-heavy and left to close itself without much mechanical intervention. All of this is true of a rectangular leaf, and must be true with bells on for the triangular leaves proposed for Poole. The design challenge is considerable, and there's clear potential for operating and maintenance problems to occur.

I can't work out whether the leaves incorporate the normal counterweights, and if so where they are. These are normally required to balance the dead weight of the deck and hence reduce the power required to open the bridge. In a conventional bascule, like Tower Bridge, the counterweight is a very short element behind the pivot which drops down below deck level when the main span is raised.

Visually, it's an excellent design, partly because the basic concept is simple and has been adhered to rigorously. Some of the details are particularly interesting, such as the wave effect on the pedestrian guardrails, although the traffic-light obelisks strike me as incongruous.

Shortlisted
Posford Haskoning
I've tried to get hold of images of this entry, but without success.

This seems the simplest of the proposals, with cable-restrained towers appearing to allow the deck to be lifted out flat rather than tilted in the more conventional bascule manner. From the one image I have found, I can't tell quite how this unusual (unique?) mechanism is supposed to work, but it could be achieved by multiple cables supporting the four corners of the lift span, coupled with pivoting support arms which control the horizontal position of the deck as it lifts.

I suspect this one was simply too modest to become the "important landmark structure" that the client wanted. 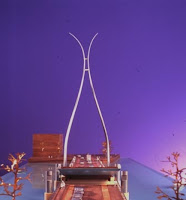 William Scherzer, inventor of the rolling lift bascule bridge, would be proud of this one. His patented design for a moveable bridge supports the opening span from curved steel girders, onto which the bridge rolls back, a bit like a rocking horse. Wear between the curved girders and the flat girders on which they roll can be a common maintenance problem with this design. So far as I know, there are very few Scherzer bridges still operational in the UK, with examples at Keadby and Inchinnan coming to mind.

This type of bridge is conventionally opened using rack-and-pinion arms or hydraulic rams to pull back the counterweight. The centre of gravity of the bridge should be positioned at the centre of the rolling girder radius if forces on the mechanism are to be reduced, but that is not always achievable. According to KGAL's website, the mechanism for this design is different, with carriages "gripping" the curved girders onto runways, presumably for visual reasons. The architect's images seem to show instead a hydraulic ram.

I like this design on one level, with its sinuous curves and potential to become an iconic bridge. On another level, the counterweight is grossly out of proportion with the actual span, and it's easy to foresee maintenance problems with the rolling girder element.

Dear Happy Pontist,
After looking at the renderings and at the Gifford Website, I don't think the Twin Sails Bridge is a bascule bridge. The designer states; "the central opening span comprises two triangular shaped lifting leaves." Also, no counterweights are visible on any of the drawings.
Perhaps some ingenious arrangement of weights, cables, and pulleys are used to help raise and lower the "lifting leaves."
Mark Y

It's described as a bascule bridge at the Eadon website, and they were involved in the design of the mechanical elements. I would strongly expect that the leaves are raised solely by the action of hydraulic rams, sized to move the entire span weight without the benefit of counterweights. This is something not recommended by moveable bridge traditionalists (like Koglin's book), because if the hydraulics fail, the entire span can come crashing down very quickly and destroy itself. However, has that ever actually happened to such a bridge?

As someone close to the project I can confirm that each span is an uncounterweighted bascule (going against the original term 'bascule' - balanced). The two hydraulic cylinders used to lift each leaf are redundant in that a single cylinder can support the weight of the bridge on its own in the event that the other one 'fails'.
Without going into massive detail here, the possibility of a failure of the hydraulic system has been considered in depth both during the initial design and also the construction phase. At worst a seal would leak which if this happened when only supported on a single cylinder would cause the bridge to lower but at a very slow rate. Each cylinder has a back up seal that can be brought into play in the event that the primary one shows signs of failure.

Thanks for that comment, it's always better to hear the reality rather than having to speculate, although where would blogs be without at least some idle speculation?