Back to the drawing board for Columbia River Crossing

It's not a scheme I've been following closely, but apparently plans to replace the Interstate 5 bridge across the Columbia River between Portland and Vancouver have been under development for some time.

The existing crossing consists of two side-by-side bridges, one built in 1917 and one in 1958, known collectively as the Interstate Bridge. Both structures include an operational vertical lift span (pictured right, courtesy of Shadowbrush on Flickr), and I gather the crossing creates a significant traffic bottleneck even when the lift bridges aren't opened.

Proposals to replace or supplement the existing bridges have been under development since early 2005. A new highway bridge with additional capacity for a light rail system was chosen as the preferred option in July 2008, and this was eventually narrowed down to a structure which would carry ten lanes of highway, light rail, cyclists and pedestrians.

From what I read, the Portland press and blogs were filled with on the one hand people agitating for a small-capacity bridge, hoping that a massive modal shift would occur amongst crossing users switching to bus or tram, and on the other hand, those seduced by the blandishments of modern architecture and hoping that a Calatrava or Hadid might design something iconic, inspiring, and certainly not the value-for-money option being promoted by their local transport department.

The process had narrowed in on an option which seemed to define the archetypal camel, being essentially a conventional balanced-cantilever post-tensioned concrete box girder, but with steel trussed cut-outs in the webs, post-box style, so that the interior could be pedestrianised while attempting to reduce the sense of confinement. Here's the scheme: 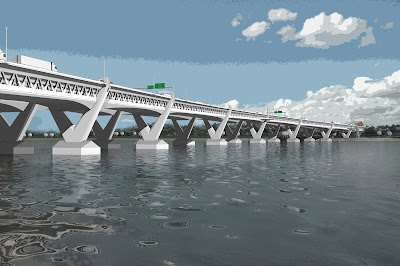 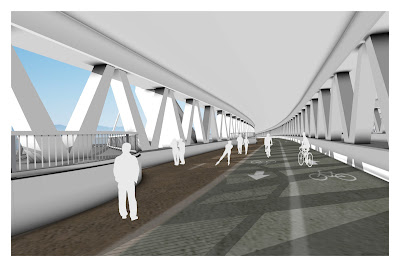 The project promoters decided to commission an independent review of the current design, from an external panel of specialists (mostly bridge engineers), with a remit both to review the engineering but also to revisit the scheme more generally and identify alternative structures or routes.

What has put the project back in the news is the publication of the panel's report [PDF], which unambiguously rejects the current design as a suitable way forward, proposing instead three alternatives, all of which are cheaper, and potentially more aesthetically appealing.

If you have the time, the report is well worth reading, a clear exposition of the flaws in the cut-out web design, and explication of the alternatives, which leaves you scratching your head as to how the cut-out webs were ever adopted at all.

Some of the panel's criticisms hark back to first-year student theory, chiefly that the design violates the assumption of classical beam theory that plane sections remain plane under bending (because the remaining concrete part of the web is such that shear deformation is non-negligible). This renders simple elastic analysis impossible, although I would not have thought that a more sophisticated finite element analysis would be beyond the wit of competent engineers. Of more significance is the confusion thrown onto the beam's failure mechanism in shear, where it is not immediately obvious whether the steel or concrete section of the web will control the ultimate shear capacity, or how load will shed from one to the other under failure conditions.

More significant still are the difficulties the design causes for construction, whether by match-casting precast segments or in-situ casting. These are too numerous to cover here, but again, the report is highly educational in this respect.

Having despatched the current design, the panel then go on to propose their own three alternatives. Each of these is rated as less expensive than the US$440m cut-out design: a series of three tied arches at US$430m; a multi-span cable-stay design at US$400m; and a composite truss at a bargain US$340m.

Starting with the last of these, the composite truss is essentially the cut-out design with the cut-outs expanded to the full depth of the web i.e. a steel truss made composite with both upper and lower level concrete slabs, with a series of 152m spans. This offers less visual confinement, and much simpler design and construction due to the clearer separation of the structural function of each element. 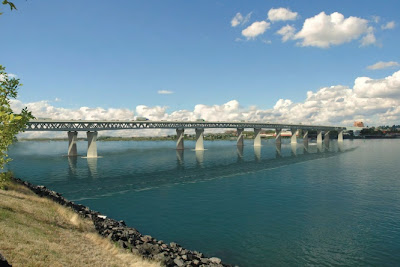 The panel note that this design is scarcely more visually appealing than the base design, with the trusses tending to opacity in any perspective view, no signature or landmark features and little opportunity for shaping the deck structure in an attractive way (although plenty of opportunity to shape the support piers). It is, however, simple to erect, and avoids interference with the flight paths into a nearby airfield. 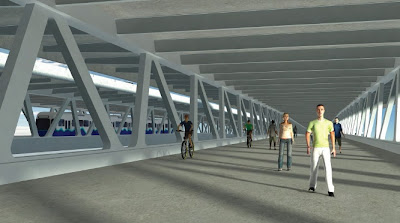 The composite truss is not a particularly common bridge design, although perhaps it is in vogue, as the Mersey Gateway in the UK has adopted a very similar solution (with highway on the upper deck and scope for light rail on the lower one).

The next cheapest design is a four-span cable-stay bridge, with two main spans of 253m each. The cables are in an intermediate arrangement between the typical harp and fan layouts, supported in two planes from A-frame towers. The bridge deck uses another composite truss as its "spine" (light rail below and footway above, the latter reminiscent of the Brooklyn Bridge), with the road deck cantilevered either side. 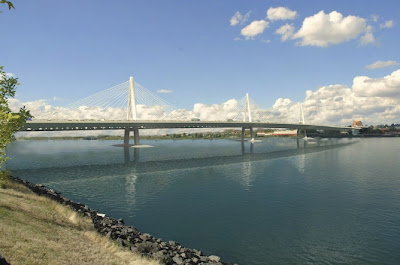 The towers are of lower height than is normal in a cable-stayed bridge, presumably because of the presence of an airfield nearby. The report discounts the option of an extradosed bridge, which would have seemed well worth considering for a crossing of this scale. 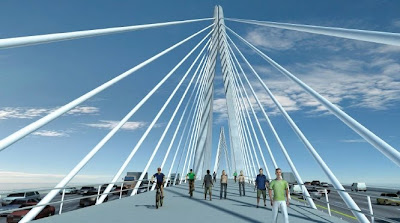 The report offers little explanation as to why the A-frame and and intermediate cable arrangements were chosen over alternatives, although I can see practical reasons given the desire for the pedestrian and light-rail spine beam, and the extremely wide highway deck (the bridge as a whole is a remarkable 71m wide). The authors also don't comment on the difficulties associated with balancing any multi-span cable-stay bridge: the use of the stiff deck truss is an obvious choice given the cross-sectional requirements, but there are several alternatives.

It's only a specimen design, but it's less well "architected" than the Mersey Gateway or Forth Replacement Crossing designs in the UK, both of which have mono-tower solutions, with the Gateway also adopting the visually less conflicted (but generally more expensive) harp layout for its cables.

The panel's most expensive option is a triple-arch design, each arch spanning 183m (at deck level, or 221m between foundations). It has two inclined arches, steel tubes filled with concrete. It's no surprise that this design costs the most, as large-span arches are fundamentally more difficult to build than a bridge form which can be cantilevered out gradually from the support piers. The arch is unstable until complete, and so requires the expense of temporary support, either from temporary cable-staying or from trestles supported in the riverbed. 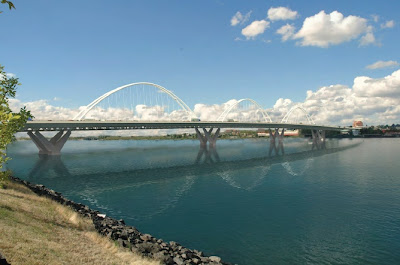 Because these are tied arches, they avoid the problem of unbalanced thrusts on the foundations when alternate spans are loaded with traffic, but at the cost of having to erect the bridge deck (the tie) before the temporary supports can be removed from the arch. This means that the deck also requires temporary support, something that could be avoided by carrying the arch thrust to the foundations instead.

They note that the Y-shaped piers "express the flow of arch compression down to the footings", but if the deck is tied then this is just visual dishonesty. It's not clear if they intend the deck also to act as a tie for the pier arms. I think this aspect of the design is poorly explained - are thrusts on the piers eliminated by the ties, or not, or is it an intermediate situation? 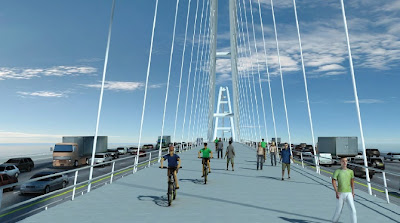 The panel acknowledge the awkward visual balance of three identical arches, noting in their report that an option with a larger central arch and two smaller side arches may be preferable. I think I'd agree with this, the rhythm of three equal arches just doesn't seem to work. The triple-arch bridge is clearly the panel's favourite design, and they note a resonance with the arch bridges of Conde McCullough in the same north-west region of the USA. It's the worst engineering solution, however, and I'm surprised they've put such a small cost premium on it relative to the cable-stayed option.

On the whole, it looks like the design process is at least now proceeding from a firmer basis. It's a challenging bridge to design, given the exceptional width of deck to be supported, and it's interesting that even the independent panel has generally gone for design options with a single central spine rather than two lines of support to the deck - given the very large torsion loads to be resisted, that seems to be an attempt to privilege aesthetics over economy. Hopefully they will carry that through in further design development, as there are a number of visual refinements that can be made at little cost, whichever of the three options is eventually chosen.