Back in April, I wrote about the Harthill Footbridge, which spans between the two halves of a motorway service station near Glasgow. The design, by Buro Happold, was largely based on their earlier footbridge at Greenside Place in Edinburgh (designed in collaboration with Broadway Malyan). Both enclose the pedestrian walkway within a tube consisting of helically entwined steel pipes.

I’ve recently had the chance to visit the award-winning Greenside Place footbridge, and it’s interesting to see how it compares with its younger brother at Harthill. 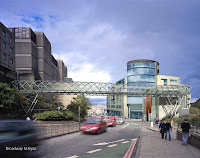 The setting is entirely different, and this has much to do with the success of each design. The tubular structure is an odd choice for the motorway crossing, with its ends left somewhat stranded. It offers none of the visual termination that is provided by a conventional arch bridge, or a more conventional truss. 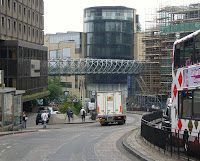 The Greenside Place bridge, however, spans a busy urban street between two relatively tall buildings, the St James shopping centre, and a new multi-storey development. At least, it does now - it hasn't been like that since it was completed in 2003 - for most of its life it connected only into a lift tower giving access to an underground car park (as well illustrated in the artists impression above right). 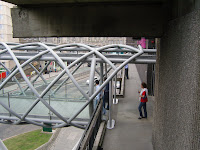 Where a bridge sprouts from two vertical faces, a tubular structure is visually far more satisfactory – the expectation is that it's an extension of each building, something perhaps expressed particularly well elsewhere at Manchester’s Corporation Street bridge. 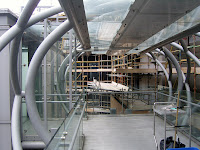 While at Greenside Place that expectation generally makes the tube work well visually, it’s not entirely a success, largely because in fact it doesn’t span between two vertical faces at all. At the shopping centre end, it gingerly touches an exterior walkway (see above right), and at the car park it currently remains a dead end (presumably a temporary situation), stopping in mid-air and offering only a side exit into the lift tower (see left). 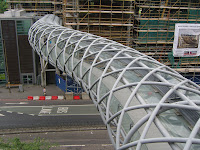 I commented on Harthill Footbridge that the helical truss form makes little structural sense for a bridge which is essentially straight in plan. The Greenside Place structure is S-shaped in plan (see right), with a significant offset between the two ends. Torsional effects are therefore significant, and the helical truss will be very efficient at withstanding these. 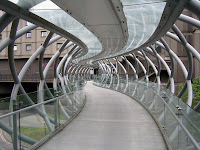 The other big difference from Harthill Footbridge is that at Greenside Place, there was evidently less concern about the possibility of bricks being dropped onto passing traffic. While Harthill's walkway is fully enclosed over the motorway, Greenside's is roofed but open to the sides. I think this is much preferable - the bridge user has more of an intimate sense of the enclosing steel cage. There's also a tension between the sense of comfort given by the enclosure, and the sense of vulnerability given by the low glass parapet. 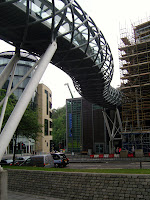 The helical design is interrupted slightly by additional, vertical rings at the support positions, required to reduce stresses in the lattice members. If you didn't know they were there, you might not spot them - they certainly don't detract visually.

Of course, the bridge remains heavily over-engineered, and very expensive to fabricate (at approximately £1.8m construction cost [the original budget was £1m], that's about £14,000 per square metre of walkway). While that may have been justified by the bridge's presence within Edinburgh's World Heritage site, it seems out-of-step with the rather unattractive facade of the St James shopping centre. Perhaps it will seem more in tune with the new building on the other side of the road, once that's complete.

I was surprised by how much I liked Greenside Place bridge, after disliking its younger sibling at Harthill. The twisting latticework makes sense against the bridge's snaking plan, and the open sides give a more user-friendly feeling. It's difficult not to be impressed with the difficulties of design and fabrication that were overcome (documented with great clarity in the IStructE paper listed below). It's hardly a bridge design that will be frequently repeated, but it would be interesting to see whether a more economic version could be developed without affecting its visual integrity.