The pre-war years were clearly a busy time for Eduardo Torroja. At about the same time as he was completing the brilliant Alloz Aqueduct in prestressed concrete (1939), he also designed two steel composite structures, Tordera Bridge and La Muga Bridge. These bridges were very radical departures for Torroja, who is largely recognised for his work in concrete, not steel.

While composite bridges had been built as early as the 1920s, they did not become widespread until after the second world war, and at the time of Torroja's designs, the detailing had yet to become codified. 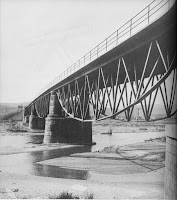 The Tordera Bridge, completed near Barcelona in 1947, replaced an existing highway viaduct which had been destroyed in the Spanish Civil War. The new structure was 8.5m wide, and makes use of the previous bridge's river piers. The centre span is 54.9m, and the two side spans are each 45.7m. The bridge was strengthened and widened to 11.5m in 1994. All black-and-white images are taken from The Structures of Eduardo Torroja (a good colour photo of the Tordera Bridge can be found on flickr).

The bridge is unusual in comprising inverted bowstring trusses, although bridges of similar design had been built previously (e.g. Biesenbach in 1890, and Little Hell Gate in 1917), and the concept can be dated at least as far back as Robert Stevenson's River Almond bridge proposed but not built in 1821. While this is theoretically an efficient solution, with the deck slab acting in compression and a slender tension member slung below, I suspect it is rarely adopted because the majority of bridges have headroom constraints beneath their spans. It also lacks the benefits of span-to-span continuity that can be provided in a more conventional truss or girder arrangement. 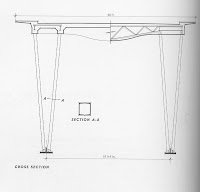 The Tordera design adopts an elliptical arc tension chord, which although slightly less efficient overall than a parabolic form allows the most heavily loaded end diagonals to be shorter and hence less prone to buckling. The diagonals are welded steel box sections, and the tension chord is a flat plate with a small upstand stiffener sufficient to resist bending between the connecting nodes.

Torroja's calculations took account of the effects of concrete shrinkage and differential temperature, which can be significant in composite bridge decks. However, his insistence on the arced chord as the most efficient shape to resist bending made the construction more complex than is now the norm.

As can be seen in the photo, significant temporary support steelwork was required to allow the bowstring truss to be rolled and then dropped into its final position. This would not be seen as efficient today, another blow against the underslung bowstring form, and indeed Torroja specifically tackled this problem in his design for a bridge over the Muga river. 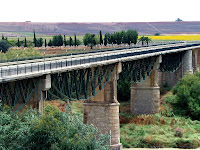 Torroja designed a similar bridge at Posadas in Cordoba, the Puente de Hierro, albeit with more spans and battened rather than solid struts (photo courtesy of RBolance at flickr). Finished in 1951, this carries a highway across the Guadalquivir River with eight underslung bowstring spans. Like its cousin at Tordera, it was strengthened in 1995, with the involvement of Torroja's son, José Antonio Torroja Cavanillas.

The Posadas bridge isn't featured in Torroja's own books, nor is it included at Structurae, so I have little else to add.

Torroja's bridge over the Rio Muga circumvents the difficult construction methods required at Tordera and Posadas by the simple expedient of adopting a flat rather than a bowstring truss. To modern eyes, conditioned by over-familiarity with composite plate-girder bridges, this seems an obvious choice. It allows the bridge to be launched from one end, minimising work in the river, and its simplicity offsets the fact that material is used less efficiently. 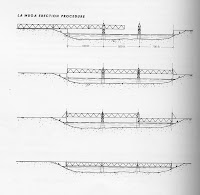 The Muga bridge didn't quite take that approach however, being launched as a continuous structure before being disconnected at each support position to form a series of simply supported spans.

While this seems at first sight somewhat baffling, Torroja's writings make clear that he felt a continuous bridge of this type was simply too unproven. His thinking on bridge design was often to eliminate stiff connections so as to reduce the effects of secondary restraint stresses, whether caused by settlement, temperature, shrinkage or any other source. He acknowledged that with the benefit of further experience, he would certainly have adopted a continuous beam design for any similar opportunities.