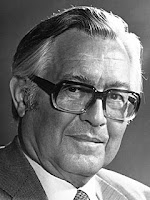 In the previous post, I took a look at Santiago Calatrava's prescriptions for how the quality of bridge design can be judged. Often seen as the flamboyant flamenco dancer of the bridge design community, Calatrava contrasts greatly with Fritz Leonhardt, the subject of this post, and someone perhaps seen as the personification of a far more sober, Germanic tendency.

Leonhardt's monumental book "Brücken", first published in 1982, offered a ten-point framework for the consideration of bridge aesthetics. This was a subject of lifelong interest to the great German engineer (pictured above left), who wrote about it several times and participated in an attempt by IABSE to publish a manual on the subject.

Leonhardt proposed the following concepts as matters to be considered in bridge aesthetics:

Leonhardt’s framework remains useful today (and is used as the basis of the Bath University work discussed previously), and allows for a considerable degree of subjectivity. However, it falls prey to the usual engineer's fallacy that everything, including aesthetics, can be reduced to a set of neat rules. Leonhardt's view on this drew squarely on tradition (you can find it excerpted from "Brücken" online in his contribution to "Bridge Aesthetics Around the World"):

"The [recognized masterpieces of architecture] reveal certain characteristics, such as proportion, symmetry, rhythm, repetition, contrast, and similar factors. The master schools of old, such as those of Vitruvius and Palladio, had rules or guidelines for these characteristics. Surely these guidelines are still valid today ..."

In the same text, Leonhardt summarised his ten rules, and explicitly linked them to an ethical mandate:

"Aesthetics and ethics are in a sense related ... Ethics also implies humility and modesty, virtues that we find lacking in many designers of the last few decades; they have been replaced by a tendency toward the spectacular, the sensational and the gigantic. Because of exaggerated ambition and vanity, and spurred by the desire to impress, these designers created unnecessary fashions, lacking true qualities of beauty".

Leonhardt was undoubtedly the arch-puritan when it came to bridge design.

Most of "Brücken" expands in great detail on the application of his framework to all types of bridges and their component parts. Even today it remains a very useful reference, although it's a shame that it's both out-of-print and generally expensive secondhand. 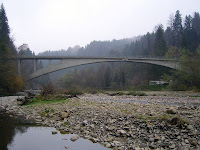 It's clear that many of Leonhardt’s conclusions reflect only his own opinion, even if that opinion often coincides with the common view amongst engineers. Writing about Robert Maillart's three-pinned arch structures such as Salginatobel bridge, he claimed that "these Maillart-type arch bridges only look good in special situations as here over a gorge and against a mountainous background." Having seen at least one, Rossgraben Bridge (pictured left), in a different setting, I'd find it hard to agree with that.

Discussing Matti Ollila's Myllysilta bridge, a very slender arch/beam bridge in Turku, Finland (pictured right), Leonhardt commands: "Do not try to imitate it; to do so one has to be a master, fully aware of all possible influences like creep of concrete etc". Okay, that's those of us in the lower ranks told, then.

None of this should be taken to indicate that Leonhardt was nothing but an old fuddy-duddy, with little to offer on how bridges can be evaluated today. On the contrary, he was undoubtedly one of the greatest bridge engineers of all time, and he was a great explainer of how small changes to bridge design could improve appearance considerably. His orthodox but highly detailed understanding of bridge aesthetics has much to offer as a way of evaluating any bridge today - if there's anything to be wary of, it's simply his linking of aesthetics to ethics, the idea that following a particular set of rules was a moral imperative.

Next: Christian Menn.
Posted by The Happy Pontist at 9:17 PM

Are you aware of any recognised guidelines for bridge design competitions?

There seems to be a body of evidence suggesting bridge design competitions need to be carefully considered regarding jury selection, entrant eligibility, selection criteria weighting, design parameters and constraints, and rewards etc.

I'm not aware of any published guidelines, although I do know that IABSE has a Working Group developing guidelines right now.

Competitions do indeed to be carefully planned, and all the points you mention are relevant. I don't think any guidelines can be too firm though, as the needs of different promoters vary considerably. I think a key thing for them to consider is whether to hold a competition at all - as a client, you lose control of the design process, and may well be dissatisfied with a design you are forced to commit to.

Discussing Matti Ollila's Myllysilta bridge - Do not try to imitate it.

Greetings from Turku. Here are the latest news.

How appropriate that the Myllysilta bridge in Turku is about to collapse any minute now. It has already bent almost a metre.

And the engineer says there has been a mistake in the original calculations, but it is unknown if the bridge is about to collapse due that. The original mistake was supposedly fixed already in '87.