Regular readers will know that the Happy Pontist concentrates on bridges news in the UK, and only occasionally ranges further afield. With that in mind, it's nice to be able to cover a proposed new footbridge from nearly as far afield as is possible: New Plymouth, in New Zealand.

In May last year, it was announced that New Plymouth's Coastal Walkway would receive a 4km extension, including a new 68.7m footbridge over the Waiwhakaiho River. The bridge, pictured above right, is being designed by local firm Novare Design, who have kindly sent me several preview images showing the design as a work-in-progress (i.e. there are quite a few details which are likely to change).

The unusual steel arch design won a design-and-build lump sum competition, with the designer estimating the cost at less than US$4,000 per square metre of deck. The site is important in Māori history, being a place where the tangata whenua resisted occupation of their land by the Pākehā in the late 1870s.

The bridge's bleached skeletal design owes a clear debt to Santiago Calatrava, albeit more organic in feel and less high-tech. That impression is in great part due to the way the arch hangers extend above the arch itself, making it hard to see the pairing as anything other than ribs and spine, the remains of some long extinct whale perhaps. 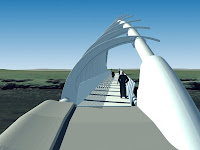 The arch passes over the deck diagonally, although the deck is supported on one edge only, which gives rise to the somewhat peculiar rib geometry, whereby the hangers have to curve increasingly towards one end of the deck.

Visually, I like the asymmetry that this introduces, although structurally it's far from efficient. The edge support will lead to a substantial torsion in the deck which has to be restrained at each end, while the angle and curvature of the hanger ribs creates both a tendency towards horizontal sway (like a swing suspended above its lowest point) and the need for the hangers to resist substantial bending moments. For a roughly 70m span, I'd guess all these effects remain within a reasonably economic range to be worth accommodating in a landmark footbridge.

The bridge behaves as a tied arch, although the large armatures at the ends of the arch spine give more of the impression of a thrust arch - I find this a little odd, but 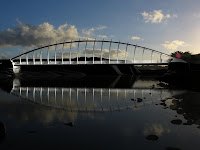 visually, it may look better than the "wedding-cake" approach sometimes favoured by Calatrava where the structure is poised precariously on supports of a very different form (e.g. Puente del Campo Volantin).

Overall, it's an attractive spin on a classic bridge form, tweaked sufficiently to be interesting, but not so far as to require extraordinary measures to maintain stability.
Commenting on the way the bridge was procured, the designer, Peter Mulqueen, notes:

"With regard to lump sum competitions for foot bridges, I think there always needs to be a set of vibration criteria explicitly outlined in the competition documents. The competition should allow for this level of preliminary design in its compensation to entrants. Otherwise one ends up competing against super skinny structures that do not have a hope of remaining stable under pedestrian and wind loads, but are very material efficient and often cheaper."

In the UK, footbrige design competitions normally involve a basic requirement that designs comply with current standards (which cover vibration), and are stable against lateral excitation in particular (the latter requirement being a legacy of the Millennium Bridge's wobble). However, it's unclear in how many cases competitors actually carry out these checks - often it depends on the risk-reward ratio inherent in the competition setup.
For open competitions where large numbers of entries might be expected, only a tiny fraction would bother to do any structural analysis at all, let alone derive predicted deck frequencies or accelerations. For invited competitions, most competent firms would carry out dynamics calculations, although in some cases (where the simple checks show a possible problem), the proposal will be made to use tuned mass dampers to deal with vibration, rather than to amend the form of structure to eliminate the problem.
In theory, design-and-build competitions like the Waiwhakaiho one should be ideal, as the risk of having to remedy any vibration problem falls on the contractor, who is likely to be extremely risk averse and insist their designer address it at the outset. Regardless, if it's going to be a concern for the client, they should be seeking assurances about the design right from the start.
Posted by The Happy Pontist at 11:00 PM

First of all, congratulations for your excellent blog. I just found it this weekend and have been reading many of your previous posts which I find very interesting.

In relation to the current topic, I agree that the structural solution (partcular the deck and "suspension system !!??") is not particulaly efficient and I would find it difficult to see it work due to the torsion in the deck, with or without dynamic effects taken into consideration.

Similar pedestrian bridges have been designed and built already in other parts of the world. This one in a city in the north of spain (pontevedra) explores he same principle of a skew arch, but in this case the cable system and deck design is more rational (cut and paste the following link):

Thank you very much for your comments. I guess there will always be a debate over cost efficency versus aesthetics.

In the case of the Waiwhakaiho, the client did want an "iconic" bridge. Selection was based mainly on price and design with equal weighting. The bridge had to be single span. An arch or truss are probably the most efficent structural system for a span of about 70m. I choose an arch because I felt I could "tune it" into the local context of site, and make the structure a piece of art that has deep meaning especially for the local people. The bridge gives access to sacred land.

The vibration criteria for this bridge is BS5400.2:2006, Annex B and the Novare Design Ltd bridge exceeds this criteria.

I acknowledge the experience I earned working for Mr Calatrava, and respect him immensely for adding so much to modern day bridge design. The Waiwhakaiho Arch Bridge is however, entirely my own work.

If anyone has other queries about this bridge, please contact me at peterm at novaredesign dot com.

There are certain types of bridge which lend themselves to architectural development, and others that don't - the arch falls in the former camp, and that's often enough reason to choose it ahead of a truss!

All this bridge is , is a waste of money

I was there today, I saw the bridge, I walked across it and I love it. The most beautiful bridge I have ever seen in my life. I am so proud to live in New Zealand because of this amazing bridge.