Bridge criticism 8: The good, the bad, and the ugly 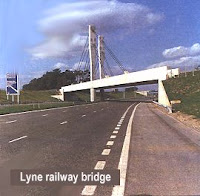 The previous post in this thread discussed the modernist article of faith that informs most engineering criticism: that bridges should be economic, efficient, and elegant. Extravagance, frivolity, and massiveness are not qualities that most engineers look for or admire. Lyne Rail Bridge (over the M25 near London, pictured right) was at one time voted by civil engineers as the ugliest bridge in Britain: it may or may not be economic, but it's certainly not elegant, and its squat, brutal presence offends most engineers.

There have been a number of attempts over the years to set out criteria against which the success or failure of a bridge design can be judged (beyond the mere ability to stand up or to not wobble alarmingly).

As previously discussed, Alan Holgate and Bill Addis both suggested several criteria, while concluding that there can be no single, simple prescription.

For the students at Bath, their analysis of each bridge involves the production of outline calculations. This both demonstrates an understanding of the structural behaviour, and allows comment on a bridge's structural efficiency. This is an excellent discipline for students, as it teaches them to consider the structure holistically, an antidote to the very close focus on individual structural elements that is common to much undergraduate teaching. It also emphasises the way in which great engineers often deal with the core of a problem by very much simplified calculations, and how these can be used to prove a structure’s feasibility without going into detail.

Clearly however, it's unreasonable to expect parallel calculations to form part of anything other than the most detailed reviews of a modern bridge (examples which do go that far include Spiro Pollalis's What is a bridge?, which analyses Santiago Calatrava's Alamillo Bridge [example bending moment diagram pictured left], and Françoise Fromonot's Passerelle Solferino Paris).

In the modern design environment, it seems unlikely a critic can offer more accurate calculations than a design's originator, especially without access to comprehensive detailed drawings. There will be cases where it's appropriate to use simple calculations to estimate the key forces on a structure, and to consider whether an alternative geometry would lead to a better distribution of forces. It's clearly also appropriate to carry out an analysis of a structure that predates modern techniques, to discover how efficient a design may be in the light of current knowledge (an example being Woodruff and Billington’s analysis of Maillart's Töss Bridge in a paper previously discussed).

Any wider consideration of a bridge’s technical or aesthetic success will be based on a set of a priori assumptions, or a design philosophy. This should be stated openly, as the modernist dogma common to many structural engineers (particularly bridge engineers, who have less experience of compromise with architectural demands) should not go unchallenged.

In the rest of is post, and the ones that follow, I'm going to cover the philosophies put forward by some of the greatest bridge designers of the last century: Santiago Calatrava, Fritz Leonhardt, Christian Menn, and Michel Virlogeux. 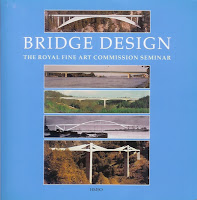 At the 1992 Royal Fine Art Commission seminar on bridge design (long out of print, but pictured right), Santiago Calatrava considered the keys to good design proposed by Marcus Vitruvius to remain relevant today:

"This is very interesting, because when we discuss the aesthetics of something that primarily has to be stable, we can only link beauty and stability with intelligence."

While these offer timeless principles that underlie good design, they would seem to be so subjective as to offer little assistance to the critical reviewer. 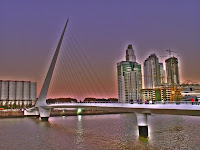 This is an asymmetrical cable-stayed swing bridge (pictured, left, image courtesy of FJTU on flickr), where the pylon inclines towards the deck. By implication there is considerable deception going on, as an enormous counterweight must be hidden at the base of the pylon, but is hardly expressed visually. To me, it looks barely stable and while I wouldn't deny its beauty, I would find the terms good and intelligent hard to apply to it in any way.

It's a case where the balance between sculptural expression and structural common-sense has tipped so far, it's fallen completely off the scale.

It's also a case where the designer's actions speak louder than his words.

Next up: Fritz Leonhardt
Posted by The Happy Pontist at 10:44 PM