Not the flippin' Millennium Bridge! Surely there's little more to be said on London's most famous (or infamous, take your pick) modern footbridge?

I think actually there's plenty to be said, not least about its aesthetic merits (vastly over-rated, in my view), about the value of failure in an era of over-reliance on computer modelling, and about the extent to which bridge promoters value star names against design quality.

But I've covered some of that previously, so will leave all that to one side for now, as this is a Bridge Competition Debris™ post, and what I'm interested in is not the bridge that won, but the bridges that didn't.

The Millennium Bridge was one in a series of proposals for a new footbridge linking St Pauls to Bankside across the River Thames. Previous plans had included the Peabody Trust's competition to design a habitable bridge on the same site. In 1996, another competition was held, run by RIBA and promoted by Southwark Council and the Corporation of London.

It's no surprise that the contest for what would be one of the most high-profile new bridges in the world received 226 initial entries.

The entries were reduced to a shortlist of six, as listed below. These were judged by a high-powered panel including the likes of David Sainsbury (chairman of the supermarket chain), Jacques Herzog (architect), Anna Ford (broadcaster) and David Bell (chairman of the Financial Times). Most judges had little real expertise in architecture, and even less in engineering. The token engineering judge was Frank Newby, a great structural engineer but a specialist in buildings, not bridges.

I've provided images of all the entries below, including various draft Arup designs which were altered somewhat in the final version as built. Several of the photos are taken from Deyan Sudjic's book Blade of Light

- if anyone is concerned over copyright, let me know and I'll remove them.

Frank Gehry has never been noted as an architect with much sympathy for structural engineering, which he seems to see mainly as a necessary evil, a scaffolding on which to hang crumpled cladding but not to be exposed itself. This design is therefore unsual in his oeuvre, with exposed steel trusses carrying a wide deck and its juttinug promenade / promontory.

The sculptor Richard Serra is better known for sheets of twisted metal plate, so this was a surprising collaboration from both sides.

It's interesting to see how this prefigures elements of the same architects' Castleford design, with the expansive timber deck, and the bridge's spine beam hidden below the central raised walkway. However, their design for the Millennium Bridge was more formal, less flowing, with the main span being a cantilever structure pivoting on two massive piers and held down at the end by cables. It's too trapped in its formal simplicity, and it's compromised by the secondary access structures made necessary at each end. 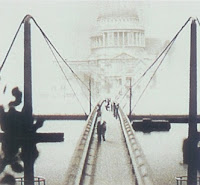 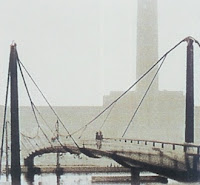 This is easily the most conventional design, and I think it would have been one of the best if built. No histrionics or gimmicks, just a simple, attractive, lightweight suspension bridge, which would have been far more visually transparent than what was actually built.

A truss structure, clad in some kind of translucent skin lending itself to multi-coloured illumination. It's nice - two simple ideas without unnecessary complication.

I like the look, but I don't understand the structure. Is that supposed to be a cable underneath? Wouldn't the bottom member be in compression, however? And would a series of pyramids connected by a single longitudinal bottom chord offer sufficient torsional stiffness? Not at this span, surely.