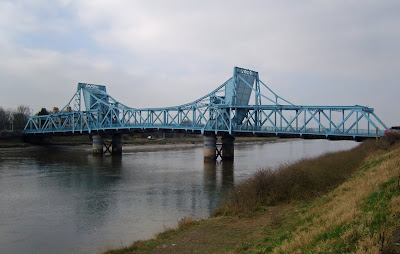 Queensferry Bridge spans the River Dee at Queensferry, near Chester. Until bypassed in 1962 by a modern steel girder bridge nearby, it was the only crossing of the river here, and hence carried one of the main routes into north Wales. 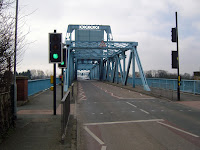 Originally, there was a ferry here, King's Ferry, later renamed Queen's Ferry when Victoria became Queen. In 1894, the Queensferry Bridge Act authorised the construction of a toll bridge, a retractable timber structure completed in 1897 to a design by T.W. Barber (pictured here), and called the Victoria Jubilee Bridge. Now, only the abutments of that bridge remain, as it was replaced by the present bridge in 1926 (another picture online shows the 1926 bridge under construction next to its predecessor). The replacement bridge was designed by Mott Hay and Anderson, and built by Sir William Arrol and Co. Ltd, for £83,051. 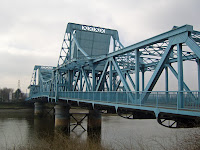 It's a double-leaf bascule bridge built to the Scherzer "rolling lift" design, although it has been fixed at midspan and no longer opens. Boats are still able to pass below, including barges carrying Airbus wings. The central span is 40.8m, the two side spans each 40.5m, and the deck is approximately 10m wide. 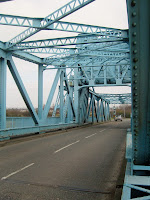 In Scherzer's design, the bascules roll back onto curved steel girders, rocking-horse style. Ballast chambers at the top of the curved girders balance the weight of the deck and reduce the power required for operation. At Queensferry, the rolling girders are located inboard of the approach span girders. The bridge deck is supported from cross-beams which are suspended below the main deck trusses in the case of the main span. 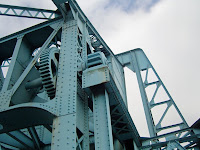 The driving mechanism consists of small pinions which roll back along fixed racks, pushing the opening span back onto its heels as they go. While a number of gears are still present, the original drive engines have been removed, and nor is there any control house. Compare the Scherzer bridge at Inchinnan in Scotland, where the mechanism is slightly different, but machinery houses are still clearly present. 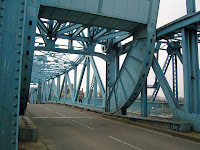 You can see holes in the rolling girders and teeth on the support girder which serve to prevent the spans from getting misaligned. Wedges have been inserted to prevent the bridge from moving.

The bridge is generally in very well preserved condition, with distinctive blue paintwork making it a bold sight. It has a definite industrial beauty derived from the contrast between the intricate steelwork and its simple, purposeful form.