Here's a project which makes for an interesting comparison with the North Sheen scheme I mentioned last week. Both schemes are for new footbridges either supplementing or replacing an existing railway level crossing, but they are very different in approach.

The conventional solution to this situation was illustrated at North Sheen: an off-the-shelf standard Network Rail design for a footbridge with a steel half-through girder main span, and steel staircases and/or ramps leading up to it. It's relatively inexpensive, largely because it combines the parapet and deck support functions together, but it's not especially attractive, especially in an urban environment.

At North Sheen, Network Rail's proposal has received planning consent, but local residents are running a design competition to see whether a better alternative could be found, without, as yet, any idea of how something better could be funded.

At Sleaford, in Lincolnshire, the local council is promoting a new highway scheme to open up access to several regeneration areas, and to replace a level crossing with a new highway bridge (at a different site). When the level crossing is closed, they want to retain pedestrian access by building a new footbridge. Here, the design is being driven by the local authority, and I would guess it is being developed by their consultancy partner Mouchel.

Lincolnshire have prepared four alternative footbridge options, and are seeking public preferences via online voting open until 5pm on Friday 18th March. As yet, they apparently don't know what any of their options will cost. This seems a little imprudent, selling the public a sports car without recognising that they can probably only afford an ordinary family car, especially in the midst of cuts to council budgets.

In contrast to North Sheen, all of the options are expensive at best, and in some cases positively unwise, along the lines of sports cars designed by Lada. I've included images of the four designs below, but more images and supporting text are available at their website. 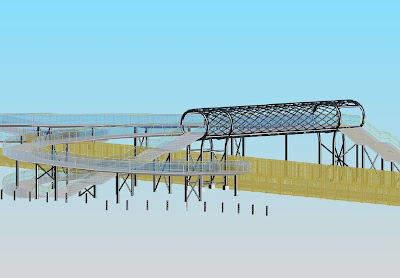 Are helical truss bridges still flavour of the month? This design has clearly been inspired by a raft of similar ideas, and shares the flaw of many of them that it's very difficult to detail the ends of the tube attractively.

Much of this is simply because a flat tube doesn't respond visually to the dynamics of the span, but the plethora of ramps and staircases required here makes the task harder still. Glazed balustrades are proposed within the tube, which is fine, but are also shown everywhere else, which would be very expensive.

There's no real logic to the use of the structurally inefficient tube, especially since this isn't a covered bridge, and it's an ugly solution. 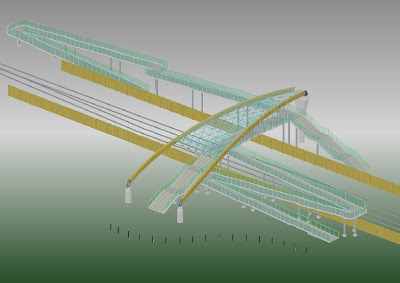 The second option has absolutely no chance of ever being built. Set aside the name, first of all - it's not a bowstring because it's all bow with no string. Set aside, also, the impossibly low rise of the arch, which is simply not feasible at this span.

Let's also discount the confusing and unnecessary array of hanger cables, the odd choice of "timber-effect" steel arch ribs (whatever that is), and the lack of any structurally substantial cross-bracing between the arches (required because of the transverse angle of the cables). Ignore, if you can, the odd decision to support the arch ribs at the top of tall pillars (how is the thrust resisted?) Perhaps many of these points can be dealt with simply by making the arch members much more substantial and allowing them to act as beams rather than arches.

It's the glazed roof that I don't buy. I've worked on the design of bridges over railways before, and I think there's just no chance that Network Rail will accept the substantial maintenance liability attached to cleaning and repairing that sort of glass structure anywhere other than in their own railway stations. Or can anyone offer a counterexample? 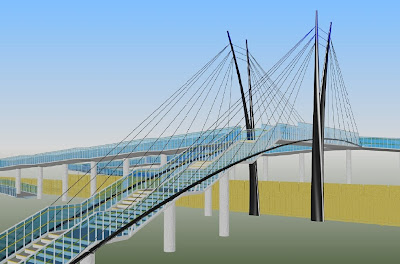 For me, the cable-stayed design is the best of a bad bunch, but it is not without its flaws. The towers are pretty, but also a little unconvincing. The glazed parapets, as with all the designs, are still everywhere.

The cable layout is frankly odd - why have three stays connecting into one at each tower anchorage, when a single stay at each position would be more than sufficient to support the bridge deck? The detailing for three stays coming together at a point is unlikely to be elegant.

My main query, however, is simply whether the staircase provides sufficient balance for the main span, particularly with the high vertical curvature and slenderness of the deck beams. For a lightweight steel footbridge, the weight of deck and staircase are probably similar, so any live load on the main span has to be resisted either by bending in the towers, or by the anchorage of the stairs into the ground.

More pertinently, the axial compression in the bridge deck induced by the stays will create a marked tendency to hog upwards if the deck curvature is sufficient. You can cope with this at a small curvature, as the vertical loads counteract the resulting eccentricity of the axial force, but it really doesn't look right here. It strikes me as the danger of preparing visualisations before initial structural analysis has been done, or someone with experience of similar bridges has reviewed the dimensions.

I appreciate that these images are being used to contrast different concepts rather than to give an accurate impression of the details, but as is so often the case, the public may be misled into liking something that could never actually be built in the manner illustrated. 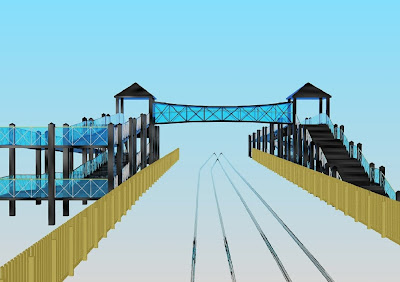 The last option is the one I would have hoped to like the most, had I just read the title and never seen the pictures. I think there's tremendous room for creative reinterpretation of such staples of railway bridge architecture as the X-braced truss. Such reinterpretation is what basically invented the "inverted fink truss", used now in a few striking footbridges but originating as a curiosity amongst American railroad bridge designs.

This bridge, which resembles the sort of thing you'd expect to see at a shopping centre in Swindon or Slough, is not what I would have hoped for. The X-bracing is used in a clumsy main truss, and then apparently cosmetic on all the balustrades. Why the obsession with glass, with its propensity to attract breakage, grime and graffiti?

Perhaps the local Conservative Association should draw inspiration from their peers in Richmond and invite open submissions for an alternative design developed by the community, "big society" style (for my non-UK readers, "big society" is government code for getting amateurs to do for free what experienced people used to do for pay).

More productively, Lincolnshire should spend some more time looking at the likely capital and maintenance costs of all four designs before they go too much further. It would be horrible if their ambitions end up dashed against the rocks of yet another standard Network Rail design, but there are ways of interpreting each of the options presented so far which are both more attractive and more economic.

There has been a dearth of proper bridge design competitions in the UK recently, and this certainly seems like a good opportunity for one.

These designs are truly appalling - an utterly misguided attempt to bring a flamboyant solution to a straightforward and modest problem. There is a time and a place for designs with strong personality, usually when trying to attract regeneration funds or to complement a historic setting, but this appears completely unnecessary at Sleaford. Apart from anything the major issue is an elegant solution to the two sets of >120m long ramps (and not the main span, which could be simply achieved with a cost-effective and elegant beam) and this is completely ducked. The images focus on the structure and show no context at all - how do they sit within their setting? Awful, misguided, banal. What options are the public choosing between - four flavours of bad taste? See the recent footbridge over the A40 in West London, by Hyder and Grimshaw, for a comparable structure which has character and visual interest, without dominating its surroundings. Also, why is the local authority not compelled to procure the design through OJEU competition rather than through in-house 'talent'? If this is the result of a design arrived at through a 'framework agreement' then this demonstrates yet agaiin the flaws of this process.

Local residents opposed to the footbridge plans are petitioning against it as reported here.

The council notes that it is "reconsidering the detail of the access ramp arrangements".