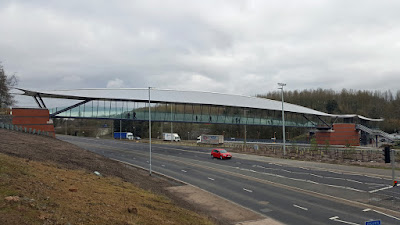 Recently, I was in the town of Telford in Shropshire, and spotted this fairly spectacular new covered footbridge. It connects Telford Central railway station to the town centre, and replaces a previous bridge which was in poor condition. The new bridge opened to the public on 30th November 2018, with the project costing £10.3 million.

There are actually two new bridges, each with a similar design by Jacobs and Nicoll Russell Studios. They were fabricated by SH Structures working for main contractor Balfour Beatty.

The shorter structure spans over two railway tracks, while the longer structure is an impressive 90m long and crosses a dual carriageway road. It's not easy to photograph in a way that makes sense of both structures and their relationship to their surroundings, but you can get all that in this fly-through video:


The main bridge structure is a hybrid steel arch truss. The exploded view below, taken from a design drawing, shows the various structural and non-structural elements: 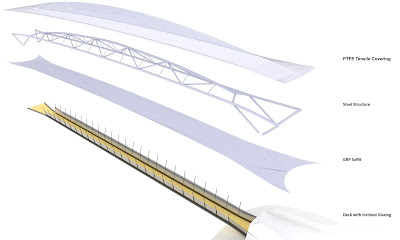 The form of the bridge is responsible for many of its oddities. The primary structure is an arched truss, entirely hidden within the roof, supported on raking legs at either end.

The central ridge to the roof initially gives the impression that the whole thing consists of two arches inclined against each other, but this is not the case: the raking legs are parallel rather than inclined inwards. It feels like a strange kind of compromise, perhaps benefiting from being largely hidden.

The outer roof covering is tensile PTFE fabric, tensioned against the steel members at each roof edge. The roof soffit is made up of GRP panels fixed to a grid of secondary steelwork, and hidden edge gutters are also constructed in GRP (there are plans and sections on the project website, for those interested in seeing more).

The hanger members are solid structural steel elements, suspending a stiffened steel grid deck (note that the drawings on the website show something different, a steel deck pan filled with concrete).

There are "swallow-tail" details extending the roof covering at each end of each span, which I think would have been better if more flamboyant, or at least if extended to fully cover the space between the two bridges (as things stand, bridge users will have a peculiar experience on a very rainy day).

A consequence of hiding the main truss inside the roof is that the hangers disappear into a featureless ceiling, which feels oddly disconcerting to me.

It's not obvious from the photos, but the roof structure is 7m wide, and hence much larger than the bridge deck, which has a clear width of only 3m (at least according to the design drawings on the project website). There's a certain top-heaviness which results, which is emphasised further by the extreme transparency of the deck and glazed walls. It's a bit like a glass of beer with too much foam left on top.

I do like the commitment to transparency, as covered bridges often give a very enclosed feeling. It lightens the overall impression of the bridge, giving good views for bridge users and I'd think a greater feeling of security as a result.

The bridges include two unusual curved expansion joints, and the larger span incorporates holding down bearings, presumably to resist overturning under high wind loads. Tuned mass dampers have also been installed, reportedly the first use of magnetic / eddy current dampers in the UK.

Check out the google street view picture from July 2018 which shows the structure partially built adjacent to the carriageway.