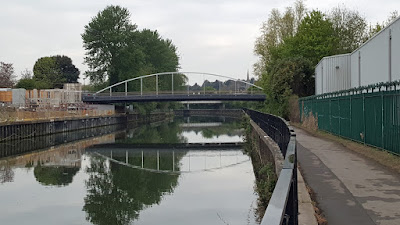 This is the third and last bridge that I visited on my recent trip to Bath.

This part of Bath is experiencing significant redevelopment, so far as I could see mainly to build new apartment blocks, the easy-money choice prevalent throughout the country. The replacement of Destructor Bridge was ordered as a planning condition for the Bath Riverside development. The new structure was designed by COWI and Knight Architects, and built by Britannia Construction, with steelwork by Cordioli.

The bridge is an absolute delight.

Its layout is asymmetrical, although this is not apparent from a distance. The 6.7m wide roadway sits between two footways, with the western footway/cycleway being wider (4m) than on the east (2.5m). Beneath each edge of the road there is a steel box girder, with the road deck supported on cross-beams laid out ladder-style. The western girder is the larger of the two, and its load capacity is augmented by a shallow steel arch. The bridge deck is constructed in orthotropic steel plate, a series of welded troughs. Anti-pigeon fillets have been added to the cross-beams.

The arch is one of the elements of the bridge that I found most pleasing. The arch rib is a super-slender steel box, more of a ribbon than a conventional box, and the arch hangers are simple flat steel plates of the same width as the arch. It's a stark and beautiful piece of architecture, and will have been very difficult for the engineers to achieve. It exposes the sheer laziness of so many similar bridges.

I suspect that it's made possible by putting more reliance on the deck girders than is immediately apparent. I think they are carrying a greater share of the load than is usually the case on an arch bridge, and most importantly the stiffness of these girders is perhaps relied upon to the restrain the arch against in-plane buckling.

Most designers put the stiffness in what they see as the main load carrying member in the arch, or share it fairly equally between the two. The precedent for Destructor Bridge's boldness might be traced all the way back to the deck-stiffened arches of Robert Maillart, and indeed the full-width hanger plates remind me of the leaf piers adopted on several of Maillart's designs.

The second box girder is therefore serving two main functions: it carries a share of the highway and footway loads, but mainly it reduces the torsional effects on the primary box girder.

Unfortunately, the arch is the source of what is at present the bridge's biggest problem. The shallowness of the rise, and the flatness of the cross-section, present a compelling invitation to anyone wishing to climb the arch, and some minimal anti-climb plates and signs fail to offer serious discouragement. Inevitably, the bridge has been plagued with visitors walking across the arches, even doing handstands, and I'm surprised not to read any mention of skateboarders and unicyclists giving it a try.

Temporary barriers have been erected around the two ends of the arch, but these were clearly ineffectual and a security guard is now present on the bridge at all times. The problem is inherent in the design, and I've seen other steel arch bridges deal with it in different ways. A bridge in Nottingham has a smoothly tapered "steeple" detail on the arch, while one in Sheffield has anti-climb "blisters". Neither solution is compatible with the Destructor Bridge design.

The same issue arose (just as predictably) on the Tradeston Bridge in Glasgow, where it seemed to be something of a novelty, a craze that just went away over time. I'm not clear whether any different anti-climb solution is under consideration on the Destructor Bridge, or whether the same process of gradual loss of interest will apply.

The low-speed nature of the road carried by the bridge has been used to good advantage to dispense with the vehicular parapets normally mandated by standards. Instead, low-profile barriers are used to keep vehicles from mounting the footways. This allows the main edge containment to be in the form of pedestrian balustrades, with the western one slightly higher than the east, as a cycle path is accommodated on this side (although not presently marked out on the paving).

The parapet design echoes the arch, with a series of flat "blades" supporting a timber handrail (with integral lighting). The taller parapet is mounted with an additional stainless steel top rail. The effect is visually attractive – transparent when viewed directly, yet solid when viewed obliquely, and I was interested to see that although visually the parapet looks quite massive at an angle it still "feels" transparent. The device of attaching the blades to the outside face of the deck edge beam is also interesting, and quite different to what is normally done to make deck edges appear thin.

I'll finish with a few of the bridge's interesting details.

The bridge abutments are massive concrete constructions, but sloped back to follow the riverbank. The corners are faceted and the front face inscribed with parallel recesses, both of which serve the purpose of breaking up what would otherwise be a large mass. The recesses also discourage graffiti.

The central part underside of the bridge is left largely untreated, but the two edge sections have been hidden behind "cheesegrater" cover plates. Service pipes run below the deck in these areas, and the covers serve both to hide them visually and to reduce the risk of vandalism.

I don't really like this detail: it makes the bridge deck seem far bulkier than it really is, and it will surely hinder future inspection and maintenance.

The final detail worth noting is the benches which have been inserted between the arch hanger plates. These are a very nice feature, minimal and entirely in keeping with the geometry of the rest of the bridge. Soft lighting below the benches is an effective treatment, although unfortunately some of the lighting seems already to be broken. 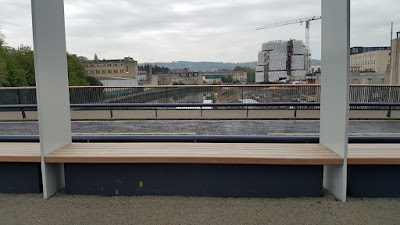 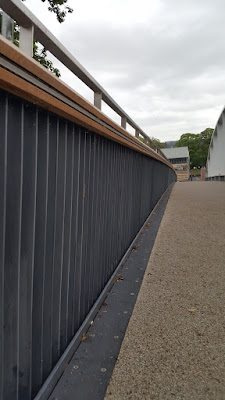 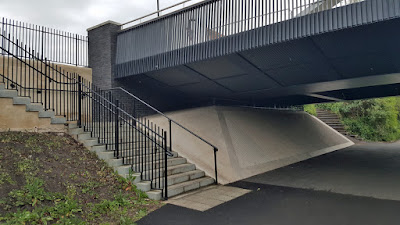 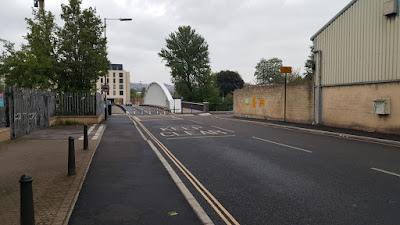 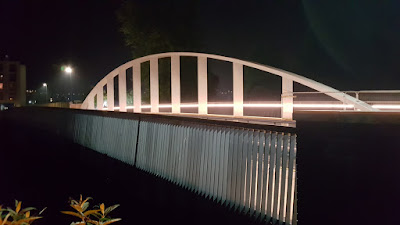 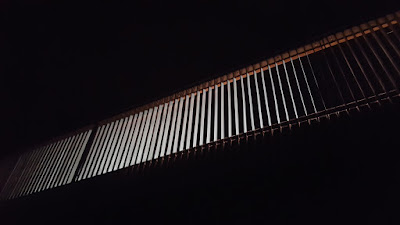 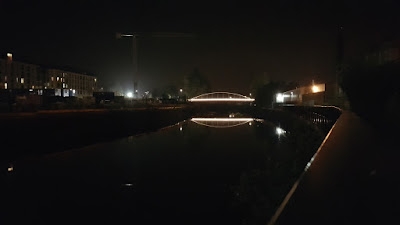 "Instead, low-profile barriers are used to keep vehicles from mounting the footways." And seem to be completely pointless as vehicles still cannot cross the bridge, several years after it was completed! The roadway is still coned off.