The Wentbridge Viaduct is only one of a number of aesthetically forthright, highly ingenious bridges to be built by the West Riding County Council during the 1960s as the motorway network was progressively expanded, forming what is now parts of the M1 and M62.

Under the ambitious County Surveyor, Colonel Stuart Maynard Lovell, the bridge team at West Riding was led by Norman Buchi. Colleagues in the team included Bill Varley, Ron Bridle, Sri Sriskandan and F.A. ("Joe") Sims. The team was responsible for the introduction of a great deal of new computing technology into bridge design, as well as for some of the most imaginative bridge engineering going on anywhere in the country. Their design efforts were supported by close involvement in research and testing work, for example, on half-joints and concrete hinges. All the above named engineers went on to considerable seniority, some in the Department of Transport, and Sims and Bridle in particular have published various papers and contributed to books on the history of Britain's motorway development.

Nonetheless, I'd be surprised if many of my readers have heard of them, which is a shame, as they deserve to be recognised for the many interesting and in some cases spectacular bridges that they designed. I'm going to cover several in the course of this series of posts, but there are many more in the area which I haven't yet had time to get to. In particular, I'll highlight the Brodsworth and Sprotborough Footbridges, built for the Doncaster Bypass, which are magnificently slender, with a span to depth ratio of an incredible 94:1. Perhaps I can cover those another time. 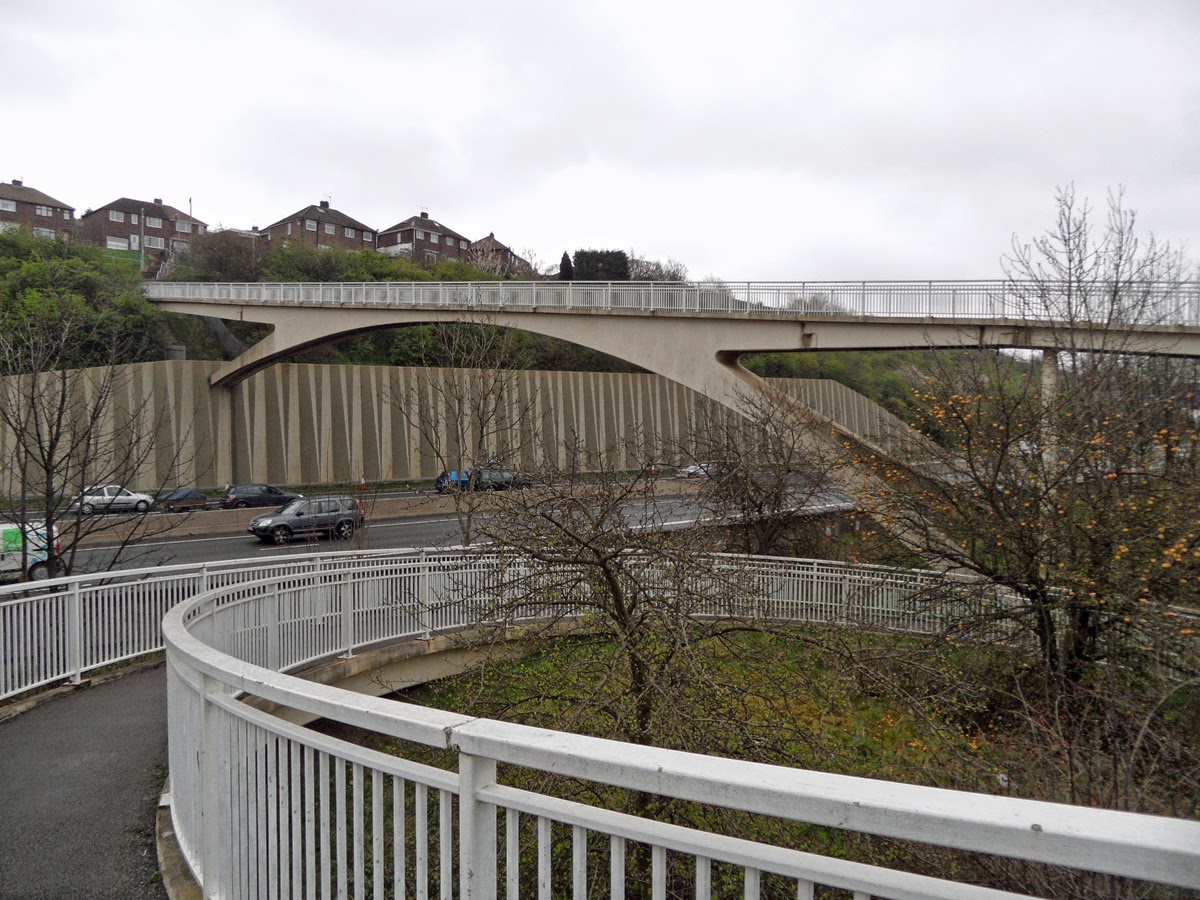 Droppingwell Footbridge spans 52m across the M1 between Sheffield and Leeds. The land to the east of the motorway sits above the roadway; while on the west it sits below, and the bridge therefore has to facilitate a very large change in level. It does this first with a gradient of 1 in 10 (described at the time as "for the easy pushing of prams", but far steeper than would now be allowed), and then with a spiral ramp at its western end. 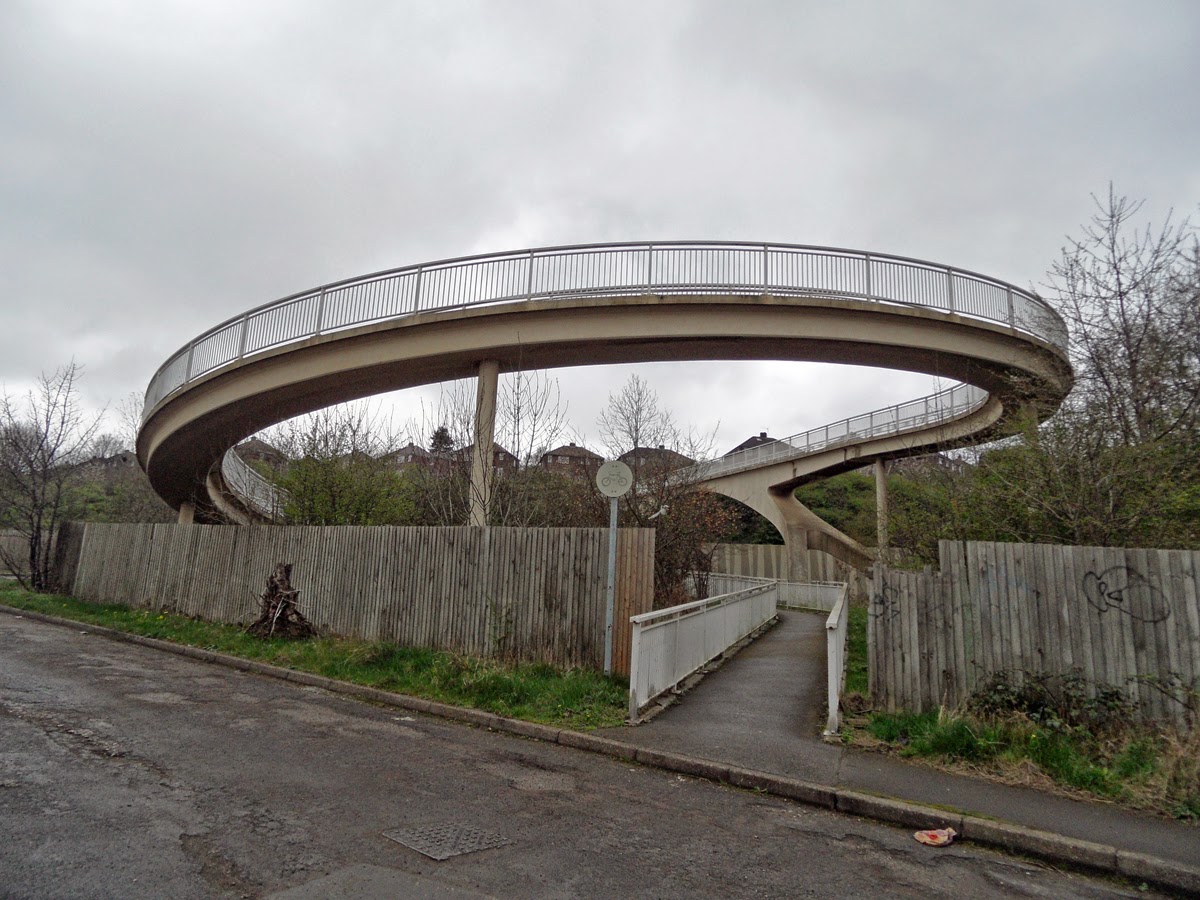 The bridge is a 3-pinned reinforced concrete arch, broadly of the Maillart Tavanasa Footbridge type, although with an elongated profile more closely resembling the Swanscombe Cutting design built perhaps a year or two earlier in Kent. 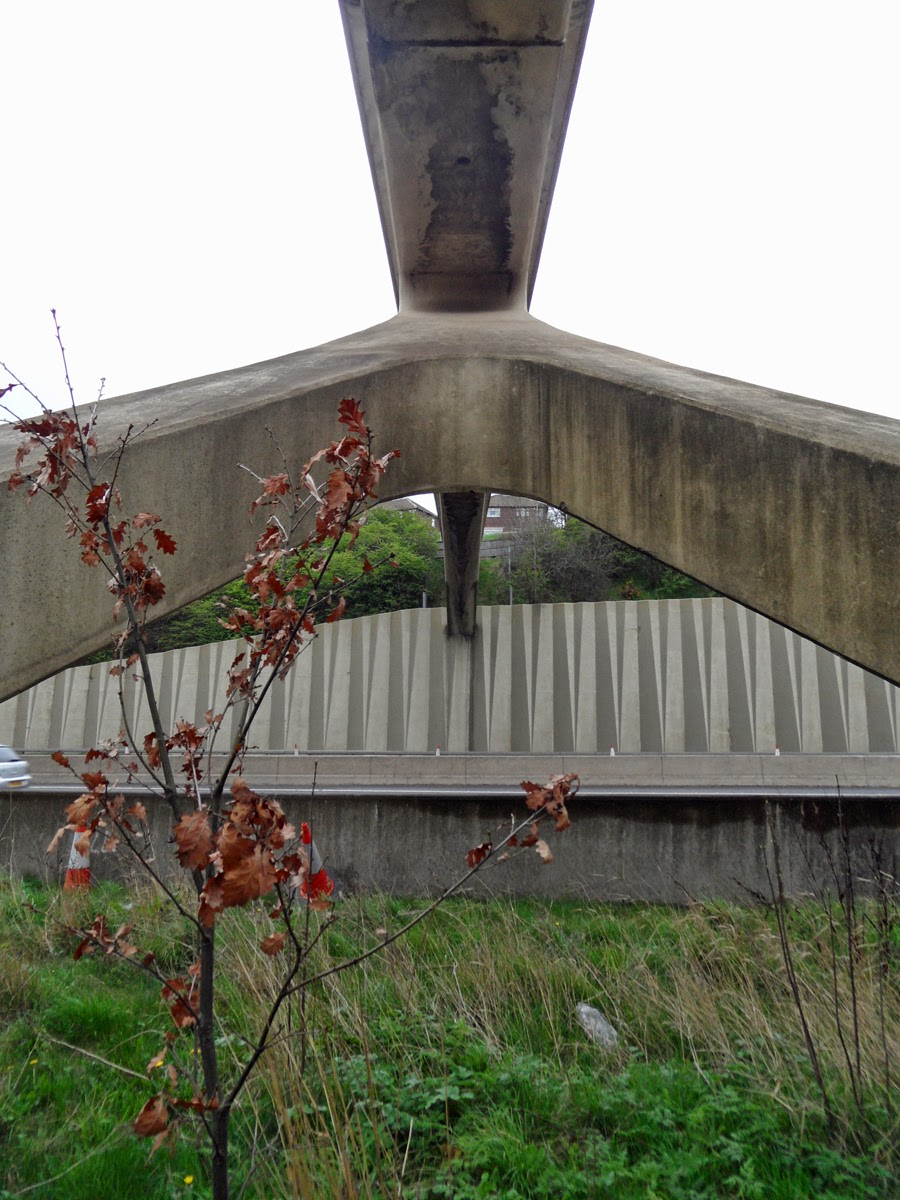 Considering the severe geometric constraints placed upon the bridge, that it manages to retain a degree of elegance is a commendable achievement. Viewed along the motorway, the profile of the bridge is very fine, although sadly for reasons of health and safety I was unable to photograph the bridge from this direction (you may wish to try Google Street View). 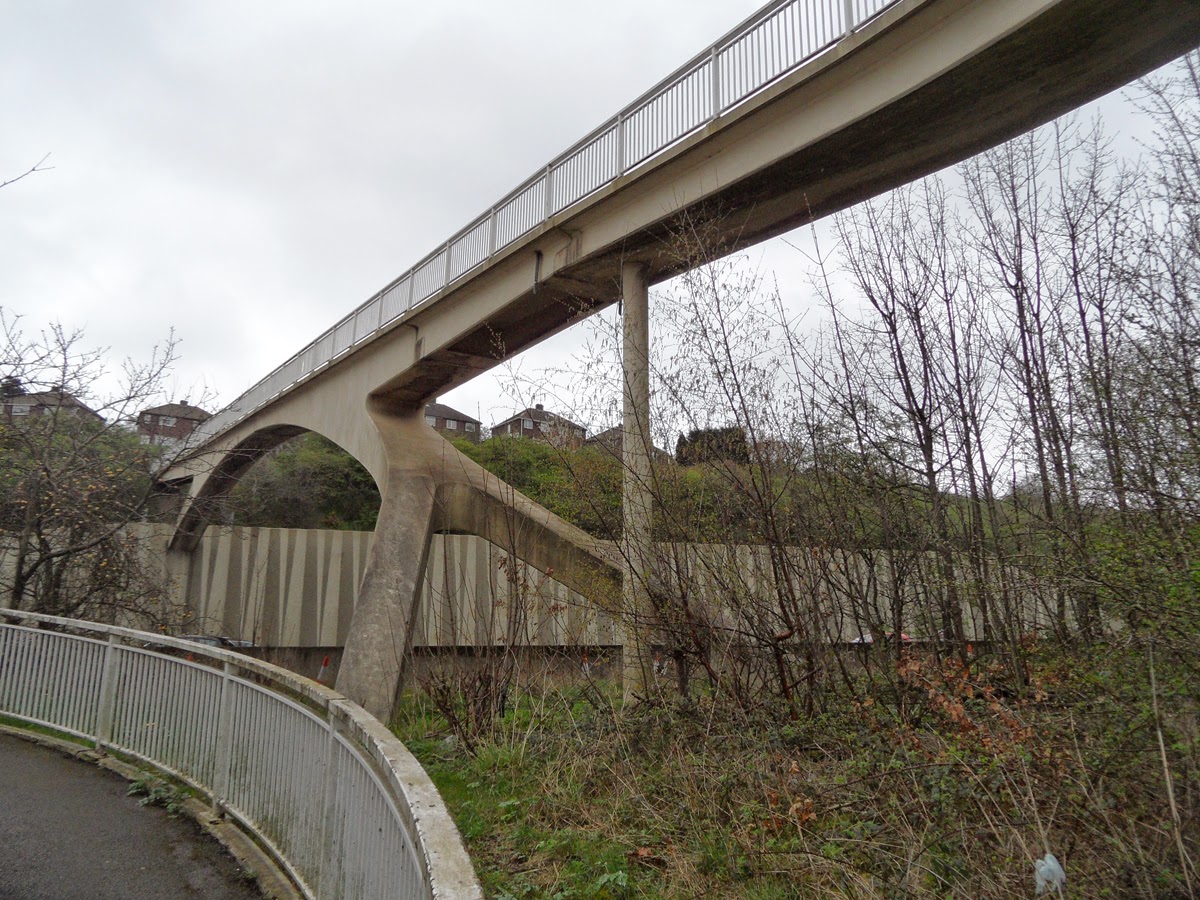 It's less successful in many other ways, however. The forked pier, with its stiff triangular form, lacks the curvature and flow of the bridge's elevation. This detail has been done better elsewhere, and I think it's the forces from the ramp that led to the fork being so wide in this instance. 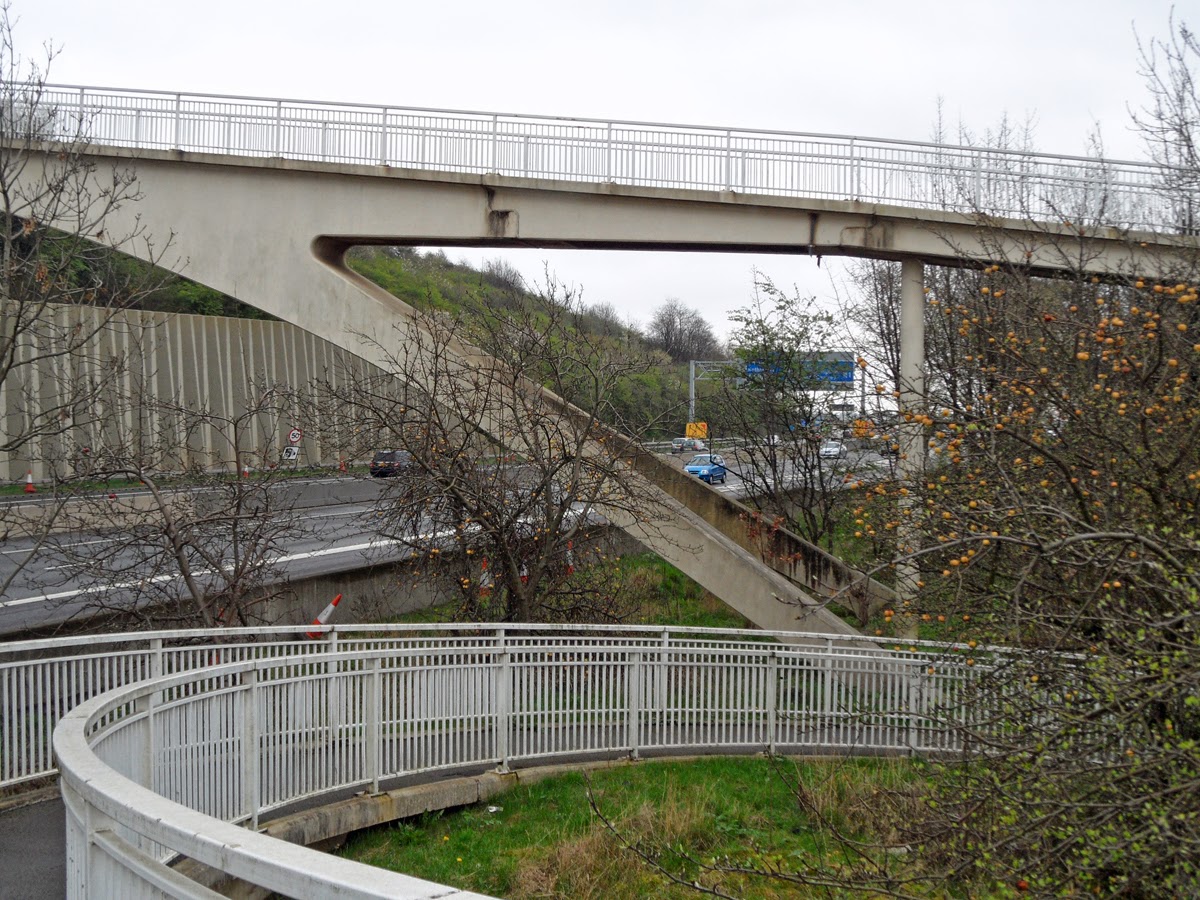 The side spans are on half-joints, and look a little clumsy, especially at the junction with the ramp structure, where the soffit line kinks in elevation. This whole area is badly detailed. 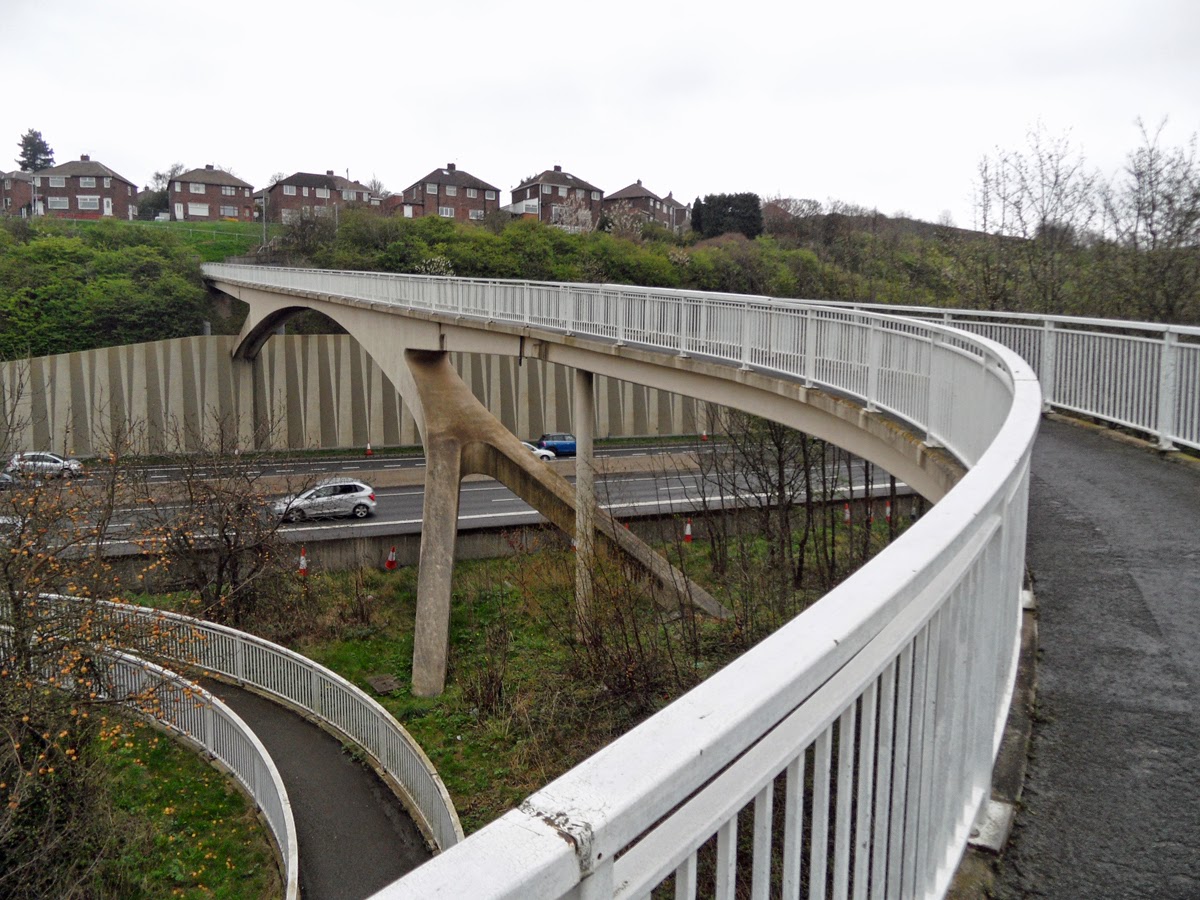 The positioning of one of the ramp's four concrete piers between the forked legs of the main span is also visually quite awkward - the two elements needed to be kept apart. 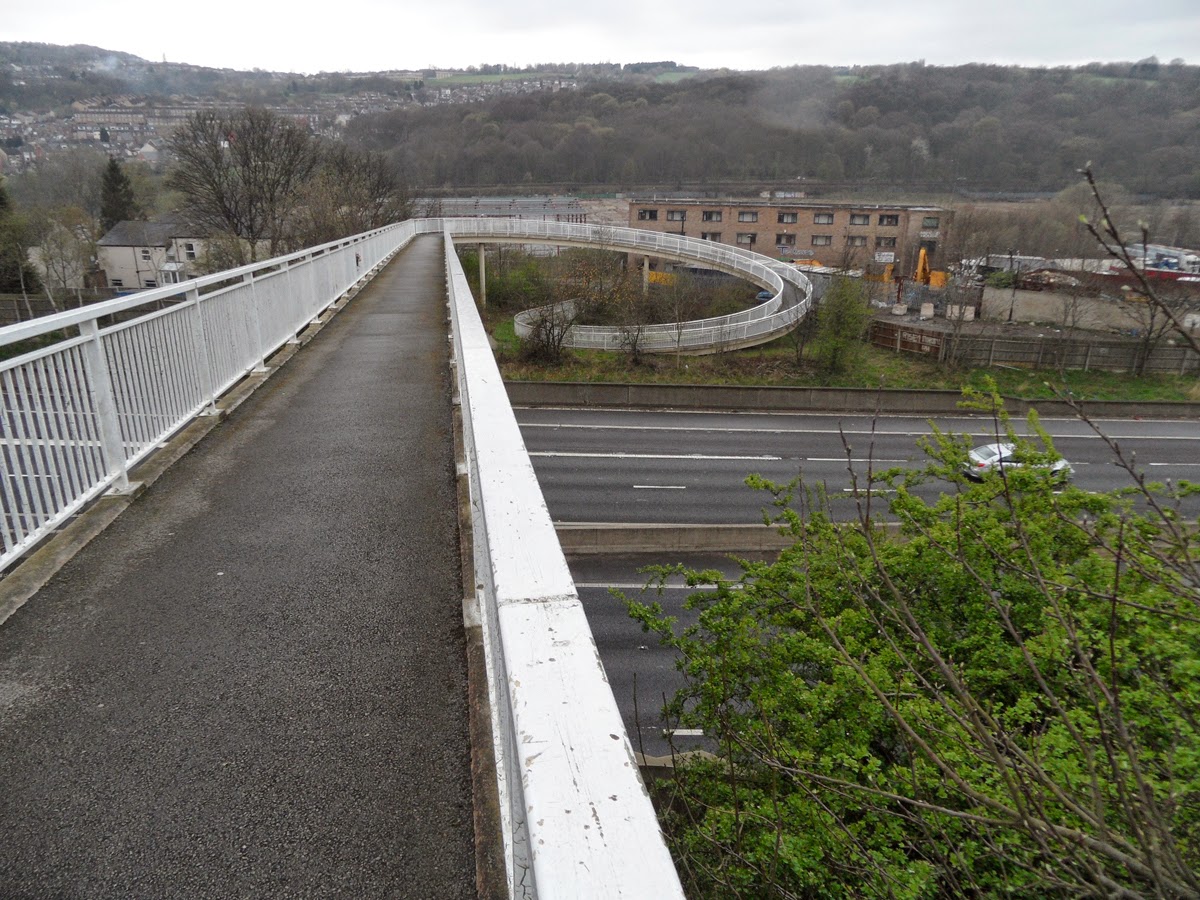 The similar bridge at Swanscome is Listed, Grade II, whereas the Droppingwell Footbridge, along with the other bridges I'm about to feature, has no heritage status. This is a sad omission, as these bridges are unique and innovative, and if not always beautiful, they were clearly designed with a strong aesthetic sensibility.