I spent a day earlier this year in the area between Sheffield and Leeds, touring a number of very interesting bridges, principally under and over the local motorways. I've been to some interesting modern bridges in Yorkshire before (the York Millennium Bridge and the Castleford Footbridge), but this was a chance to take more of a trip back in time, roughly half a century to be precise. 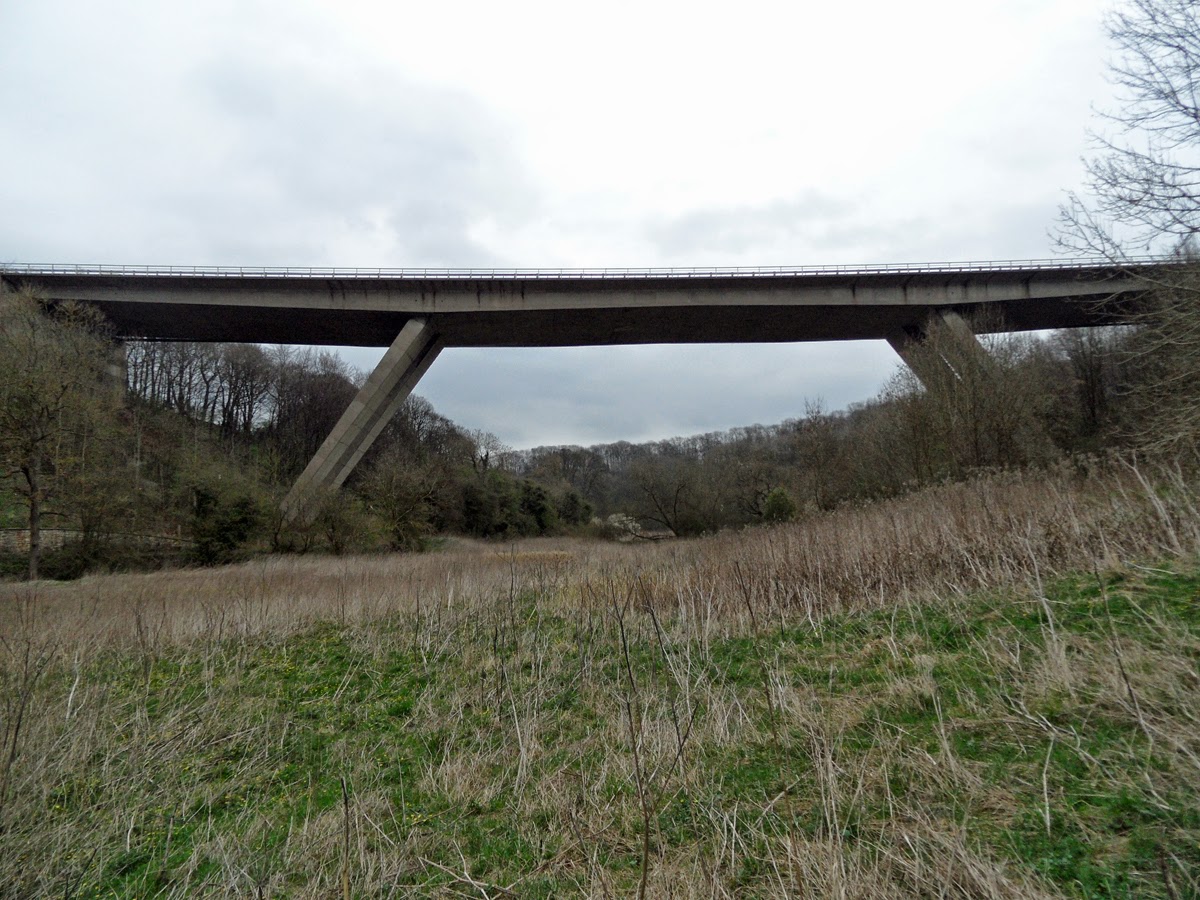 Wentbridge Viaduct was built as part of improvements to the A1 in 1961. It cost £320,000 when built, and has a central span of 94m (between the pier bases). Design is usuallly credited to the West Riding County Council's County Engineer, S. Maynard Lovell, although the lead designer was more probably F.A. Sims. 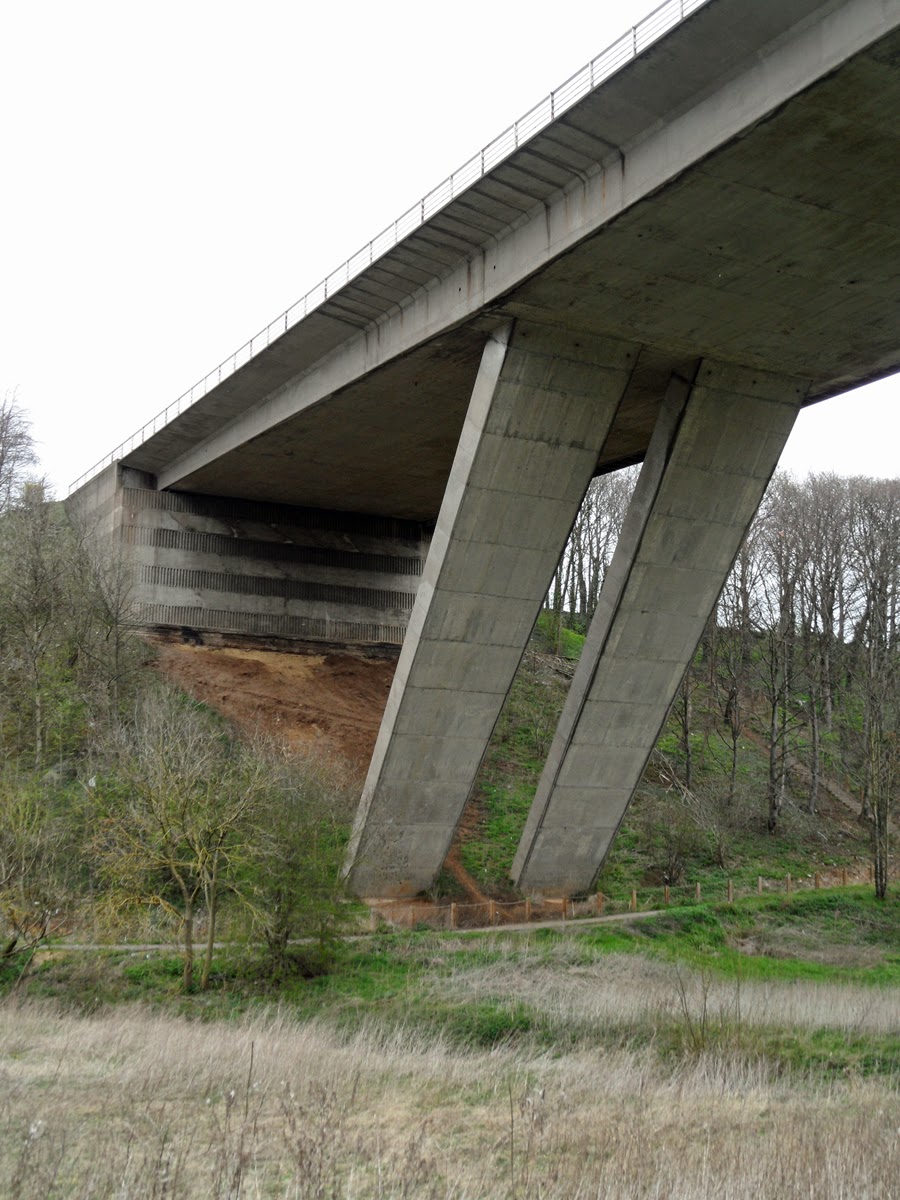 The deck is of post-tensioned concrete, with six box cells, and sits on inclined cellular reinforced concrete legs which are pinned at top and bottom, with precast concrete hinges. The prestressing cables are external to the box webs, and are continuous over the full 143m length of the deck. This was the first use of external prestressing in the UK. Additional internal cables are provided in the top slab over the piers, and vertical prestressing is used to counteract shear in the side spans. 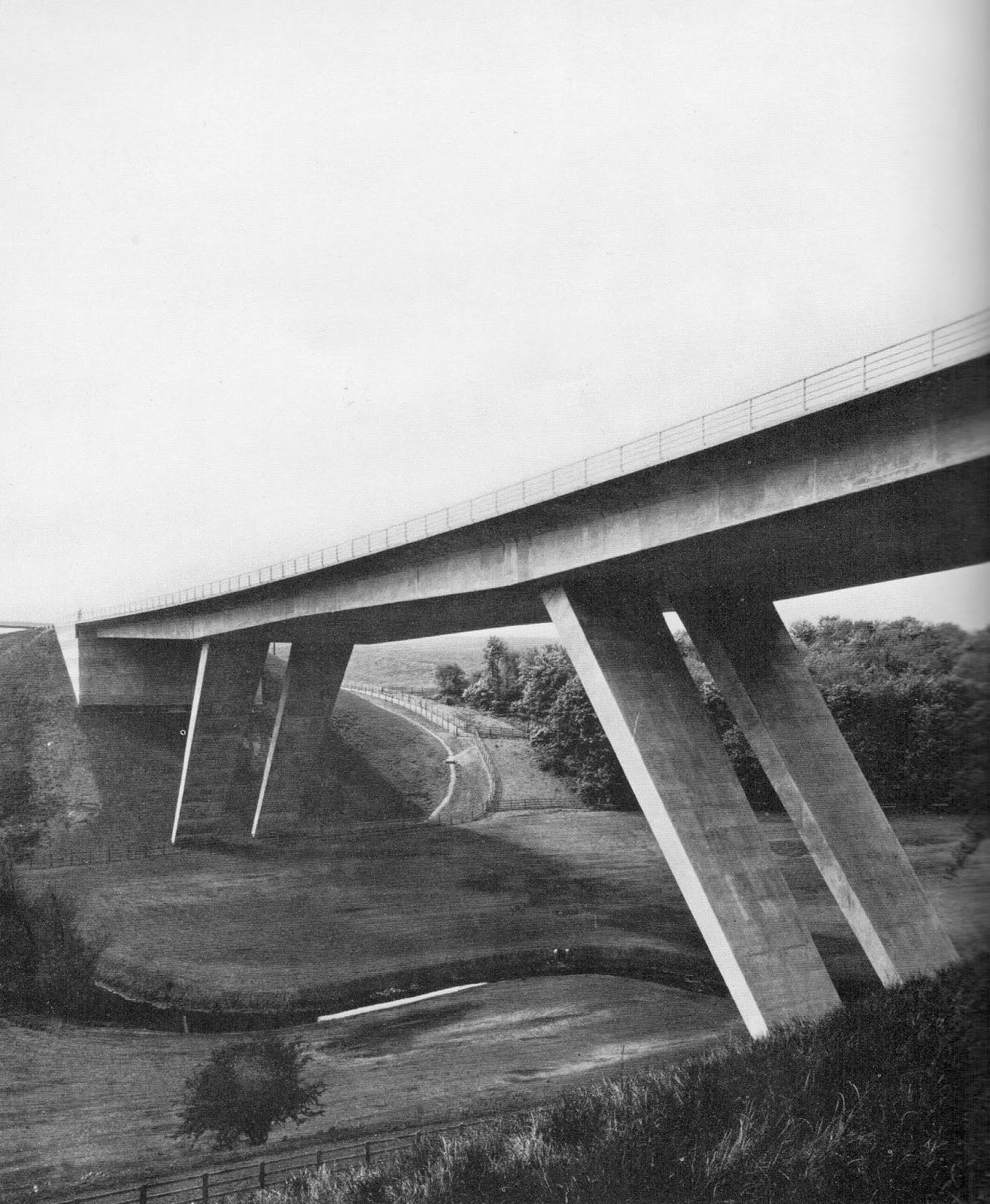 The bridge was recognised for its significance at the time it was built. It was one of only two British bridges selected to feature in the Twentieth Century Engineering exhibition at New York's Museum of Modern Art (the other was the Hammersmith Flyover). The image on the left was taken shortly after the bridge was built, and shows it at its majestic best.


"At last Britain has a bridge to show which, by virtue of its dramatic impact, its taut, pared-down elegance, its sheer size, can hold its own with any of the great bridges on the Continent - a bridge of a Maillart-like excitement, that even the Autostrada del sole cannot better". 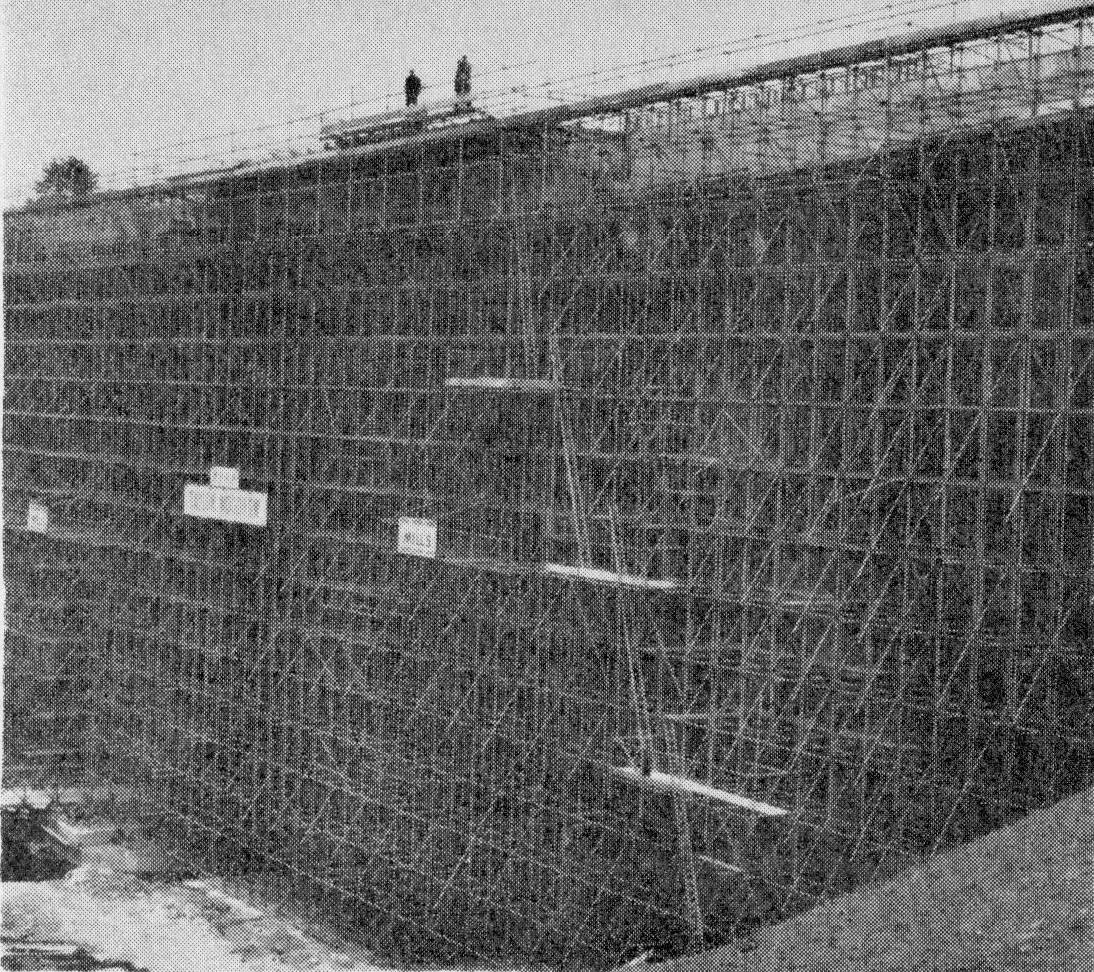 Since 1998, its significance has been recognised by its status as a heritage-protected Listed Building, a rare accolade for such a modern structure.

It's difficult to see a bridge like this being built again, certainly in Britain. Much of the cost will have been in the temporary works, particularly the forest of scaffolding required, which was pictured in Modern British Bridges, and is shown here. Any bridge of this scale would almost certainly now be built in steel, and probably on much cheaper vertical concrete piers, regardless of the aesthetic merits. 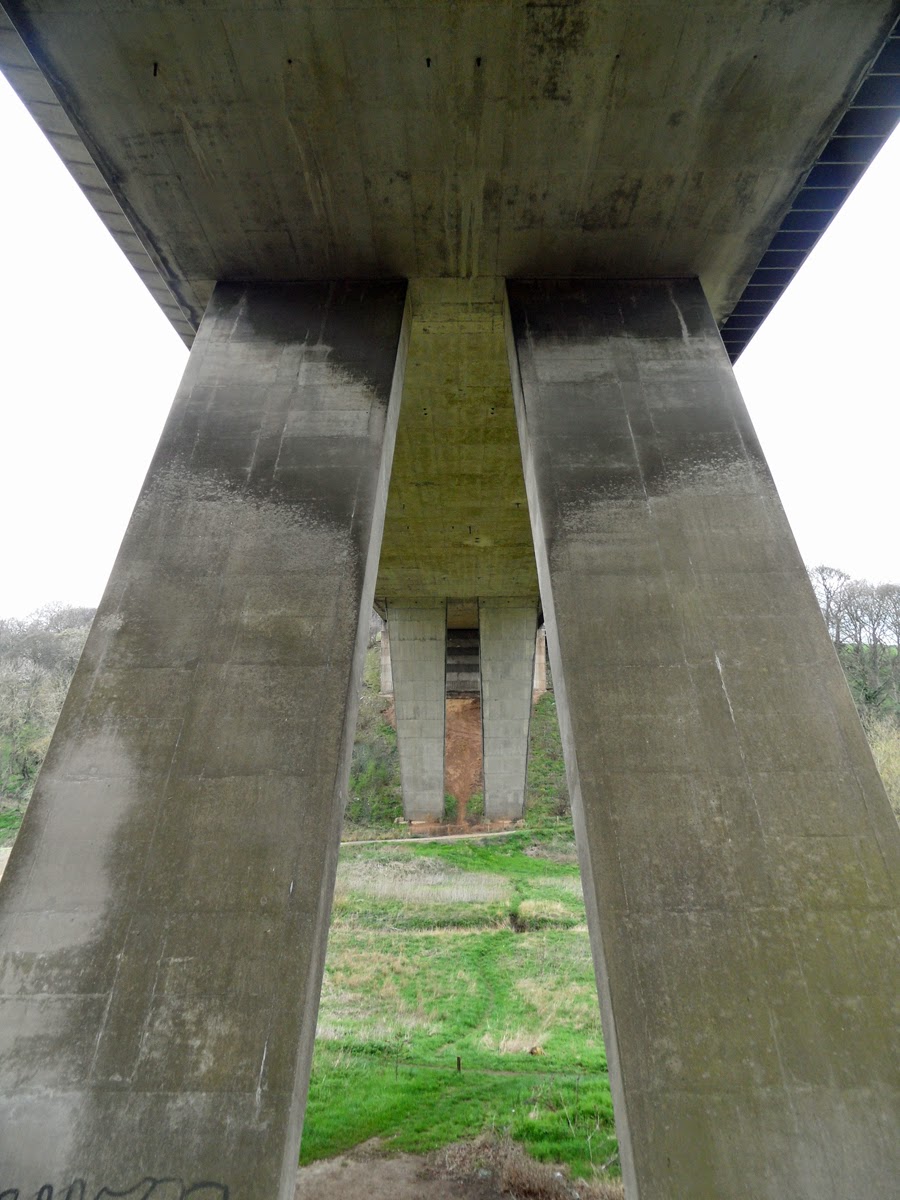 I didn't visit on the brightest day, and growth of vegetation in the river valley over time has made the bridge hard to photograph in its entirety. The bridge is massive in size and presence, but delightful in its stark lack of embellishment. Only a subtle curvature to the underside of the deck, and the minimal taper of the pier legs, give any sense that the bridge is more than a series of giant, monolithic paving slabs propped against each other. 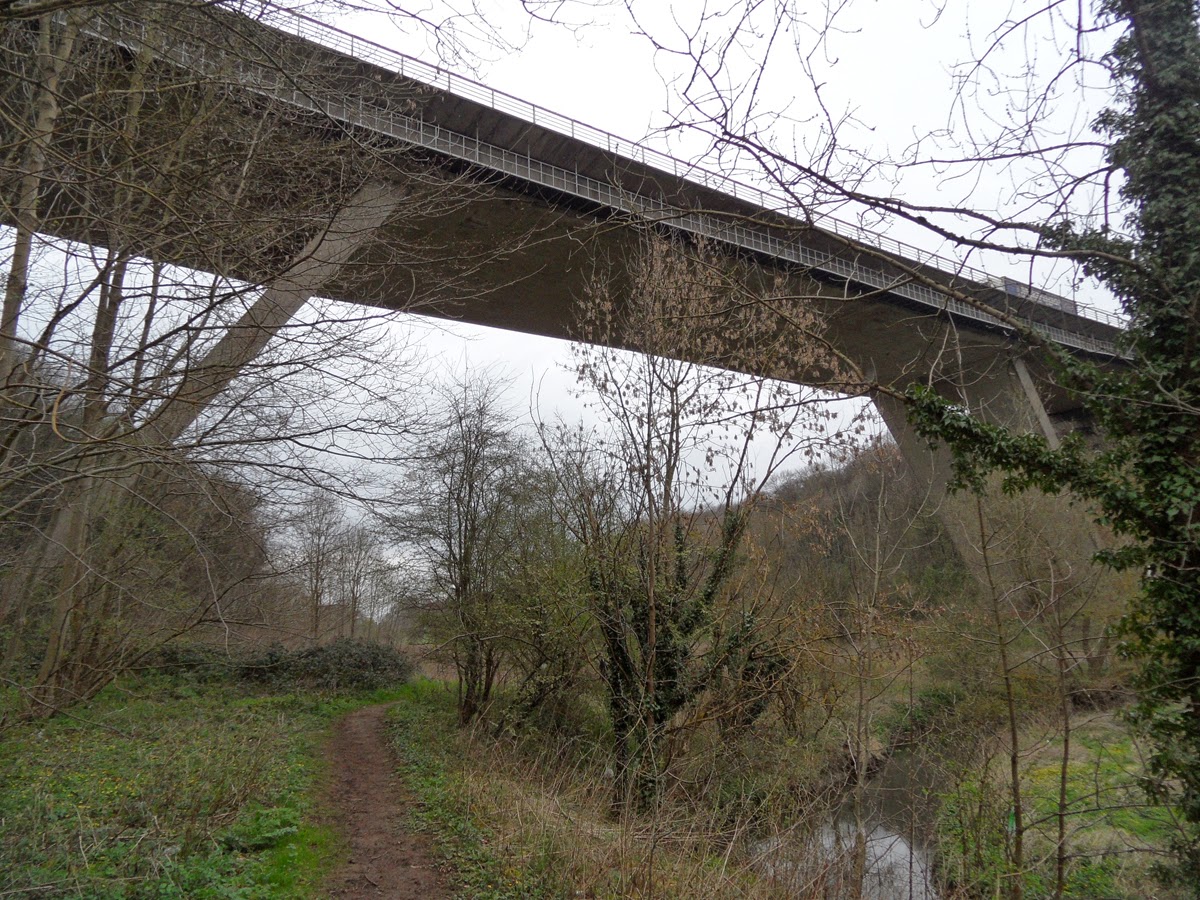 A caged walkway has been added to the east face of the bridge, with very little care taken over its appearance. In parts, it projects below the deck soffit, so it can be seen from the other side of the bridge, spoiling the deck's clear lines. I guess this must have been installed before the bridge was Listed, because I can't see how it would be an acceptable addition to a Listed Building.

Posted by The Happy Pontist at 9:37 PM

Do you know the purpose behind having the inclined supports ?