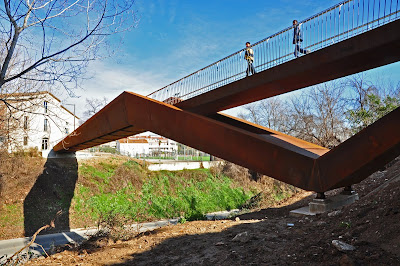 I've been waiting for an opportunity to feature one of the bridges of Xavier Font Solà (of the design firm Alfa Polaris), and with his Can Gili Footbridge completed on site in January at Granollers, near Barcelona in Spain, that opportunity has arrived.

Alfa Polaris is perhaps best known for their multiple award-winning restoration of the Pont Trencat, a historic masonry arch bridge which had been partly destroyed in 1811. A new span was added in weathering steel, retaining the arch form, and achieving a unique blend of historically sympathetic restoration with brutalist modern intervention. I also very much admire their Joan Camps footbridge, also in Granollers, which again uses weathering steel and gives a very distinctive take on the traditional Warren truss design.

If rust orange-brown steel seems something of an Alfa Polaris signature (much as white paint is for Calatrava), then the €574k Can Gili footbridge will do nothing to dispel that impression. The bridge design commenced in 2001, but funding for construction was only secured in 2009. The structure was built by ACSA Obras e Infraestructuras, with steelwork by Talleres Plain. 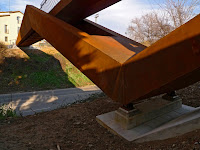 The design's heavily asymmetric appearance is a direct response to the profile of the highway cutting that is bridged. This is also asymmetric, with an embankment much taller on one side than the other, and there is poorer ground to one side of the highway. This has led to the single offset V-shaped pier, although you could also see the bridge as arch-like in its form.

The bridge was erected with only four one-day road closures, which the designer notes was a key constraint leading to the adoption of a steel rather than concrete design. However, my own experience is that in the UK at least, it is exceptionally rare for a road to be closed for so long, and most footbridges over highways have to be installed within a single night-time closure. Four days is positively luxurious.

There's absolutely nothing about the site which makes the design choices inevitable. Plenty of other structural forms could have bridged this divide, most without any need for an intermediate support within the highway cutting. The design seems positively willful, but the result is sufficiently striking to justify that.

I don't know how weathering steel will develop its characteristic protective patina over time in Spain, but the current orange colour looks spectacular against a blue sky. The dark purple colour it can take on later will have less character, but most of the bridge's visual impact is from its shape anyway.

Do I like it? Very definitely. It's strong and bold, and shows that a form with almost brutal solidity can still make an attractive structure in the right context. That's in marked contrast to the trend for modern footbridges to be lightweight, almost to dematerialise in favour of ultra-slim decks and cable support networks.

Great design, I love the plasticity and sculptoric spirit of this structure. Good article.