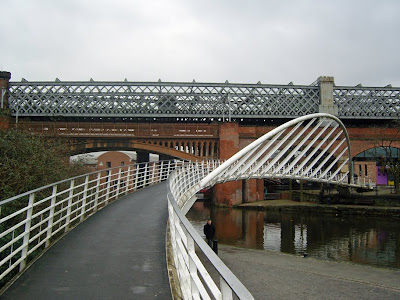 Merchants' Bridge is one of the best known "iconic" bridges to have been built in Manchester. It's a mere minute's walk from Architect's Footbridge within the Castlefield area, and spans across the main canal basin, providing a key connection for the area's residents and trendy diners.

The designers Whitby Bird (now part of Ramboll) wouldn't hesitate to accept that its tilted white arch was inspired by the designs of Santiago Calatrava, and the bridge most commonly cited as its inspiration is Calatrava's 1991 La Devesa footbridge in Ripoll, Spain. The whole ensemble of a deck curved in plan hung from and counterbalanced by an inclined arch seems something of a cliche now, so it may be a surprise to see how few bridges of this precise type there actually are, even in Calatrava's oeuvre. 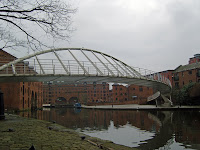 Indeed, the Ripoll bridge has a straight rather than curved deck, an arrangement with far less logic to it than the Whitby Bird design, which could be considered an improvement. The vast majority of Calatrava's inclined-arch bridges have a straight or near-straight deck, a typology that Whitby Bird later turned to for the York Millennium Bridge. On the comparison between Merchants' Bridge and Calatrava, Mark Whitby wrote:

"I am uneasy with his extremes but a reinterpretation of his La Devesa Footbridge in Ripoll, Spain was the genesis for our Merchants' Bridge in Manchester, which at the time we instinctively felt was a more honest structure. In fact, it is the opposite, albeit possibly more sculptural."

As with many of the bridges I'm covering in this series of posts, Merchants' Bridge was the winner of a design competition seeking a regeneration centrepiece for its locale. Built in 1995 by P Casey & Co Ltd (Watson Steel as steel fabricator), it cost £416,000. Like the Architect's Footbridge, it was funded by the Central Manchester Development Corporation. 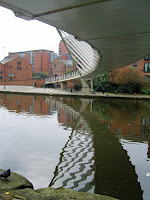 The bridge deck is 67m long, with a 38m main span supported from the arch. The deck is a very slender 375mm deep (or 475mm, depending which website you read), and appears to consist of edge tubes and cross-beams connected into a torsion box by steel panels, in the form of a stressed-skin structure. The high torsional stiffness is vital, as the arch provides minimal restraint against the twisting inherent in a deck supported on only one edge. The extreme slenderness is an effort to satisfy the canal headroom constraint while not leading to unduly long approach ramps, and in that the design succeeds admirably, flowing smoothly into its south approach ramp without looking at all awkward. 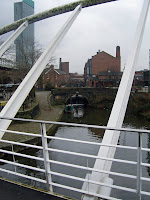 The arch and deck also serve to brace each other, such that the stiff deck helps prevent the arch from buckling in its plane, while the cantilever arms connecting the two prevent it from buckling out-of-plane (pictured right, which also shows in the background the Castle Street bridge, Architect's Footbridge, and Beetham Tower, Manchester's tallest building). As such bridges go, this is an arrangement which combines structural efficiency with visual attractiveness.

Having said that, it's worth noting that this is a pretty lively bridge, quite easy for a single pedestrian to excite into vibration. I noticed two circular patches in the deck near midspan which looked like they might be covers hiding pits for tuned mass dampers to be added, but if so, then it seems unlikely that dampers were ever installed. 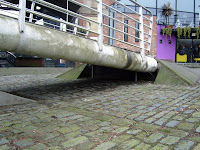 The bridge is a fitting response to its site, to the geometrical constraints, the pedestrian desire lines, and to the need to create a structure which is prominent and quickly comprehensible from a wider variety of viewpoints.

There are two side spans to the south, and one to the north. These are where the limitations of the design begin to make themselves known. The north span is extremely short, to the extent that it is held down with tie bars (pictured above left) rather than supported on bridge bearings. 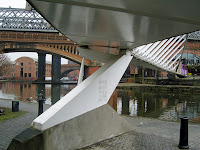 The south pier is also very peculiar effort. It's inclined so as to give the visual impression that the arch thrust continues into it, but in fact the only significant loads supported are vertical. The need to adapt the thrust pier to carry the torsion from the deck has led to a very odd cantilever with a slender prop/tie, which I find quite unsatisfying, but this is a detail which was never going to be straightforward to resolve, and the sort of area where I think it's fair to say that Calatrava does it better.

The bridge parapets are a series of horizontal flat plates (breaching the normal practice that parapets should be designed not to be climbable), with a stainless steel top plate. 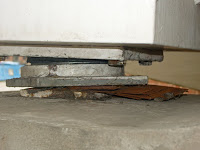 The bridge has won several awards, including (slightly oddly) a Millennium Product Award - try sticking one of these in the back of your car with that new hi-def telly. But fame is no protection against grime, and like many of the bridges I saw on this trip, the bridge is encrusted with grime and parts in need of repainting. Surely the bridge bearing pictured on the left ought to be high on any maintenance list, what with its way off-centre loading and flurry of rusty shim plates.

But neither grime nor bounciness, nor the ghost-town surroundings, can drag this well-designed bridge down. It fits well into its context, and is a fine contemporary addition to the townscape.

I am the engineer who designed this bridge, alongside Mark Whitby.
The bridge deck does have 2 TMD's inside the two hatches that you noticed. The bridge is lively but was even livilier without the TMD's. Usually, if you excite the bridge you can hear the steel masses within the TMD's gently clang against their rubber buffers. If you haven't heard this then the TMD's may need to be added to the long list of items nedding maintainence!
Des Mairs, Whitby Bird (now Ramboll UK)

Hi Des, I hope you found my comments to be reasonably fair!

I didn't hear anything from the TMDs, but wasn't trying too hard to make the bridge move (indeed, much of the movement was from other bridge users, who were no doubt not especially trying to step in time to a resonant frequency, as I was). I'll listen out for it if I'm ever there again!