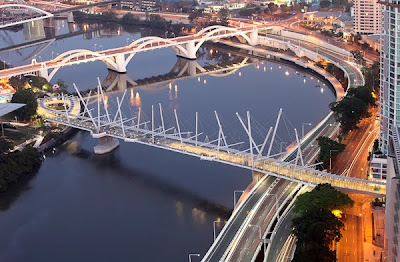 The AUS$63m Kurilpa footbridge in Brisbane, Australia, was officially opened yesterday. Designed by Arup and Cox Rayner, and built by Baulderstone Queensland with Beenleigh Steel Fabricators, its main span is 128m, and it's without doubt a challenging and unique structure, exploiting (while not strictly adhering to) Buckminster Fuller's principle of tensegrity.

The bridge incorporates solar panels which provide all the energy required for its programmable LED lighting system.

It has been described as resembling knitting needles, sailing boats and magpie deflectors, and has run into controversy when a report raised concerns over vehicle impact. But with the dust now settled and the bridge complete, the question is whether it's a success.

As ever, it's hard to tell from photos, but I haven't seen anything to contradict my previous view (see related post below) that it's irrational, exuberant, and spectacular, while making very little sense structurally. The covered walkway seems to detract from the overall appearance, and the tops of the masts seem inelegant and clumsy. Its landmark quality is undeniable, but it will be interesting to see how well it ages. I'd definitely like to visit it to experience it properly!

I can see this bridge from my office here in Brisvegas.

Locals don't think much of it.

One funny comment I heard on the radio was "... I don't like the look of it so far, bit I'll reserve my final descision until construction is finished and all those wires come down." Didn't hear the rest of the comments as this one gave me the giggles.

One comment from the guys in the office was that the main deck is stable but the viewing platforms have quite noticeable deck movements around midday traffic. Will check this out soon.

If ya would like some pics let us know.

I can imagine providing an oscillation-free experience on a tensegrity(ish) structure is quite a challenge, but as Arup are the designer, they no doubt have quite a bit of experience to draw on in the design of a very unusual cable-supported footbridge!

As a regular cyclist over this bridge I love it. It keeps my interest a lot longer than most bridges. I love the look and feel of the curved ramp on the South Brisbane side, the light feel of it underfoot (or tyre) and at night it can be absolutely stunning with its solar panel generated lighting.