Design options for a new light rail bridge over the Williamette River in Portland, Oregon, have been presented to the local design community by architect Miguel Rosales (see previous post for further details).

Only two options are currently being offered, a choice between a cable-stayed bridge or a "wave frame" span (arch, box girder, extradosed and truss options being previously rejected in a lengthy exercise). The latter, pictured above, is Rosales' pet scheme, an exotic curved Vierendeel truss bridge, which draws its inspiration from Schlaich Bergermann und Partner's Havel Railway Bridge.

The main difference is that the SBP bridge has a traditional stiffened girder web, while Rosales' variant omits the web to achieve transparency. Structurally, the resulting design is considerably less efficient, and I'd personally doubt the ultra-slender members shown on the visualisations are quite was is achievable.

The article at OregonLive.com suggests that Rosales impressed his audience with his even-handed approach to both options and his "precise, minute understanding of bridges, not just their design but also their engineering". Set aside for a second the semantic divorce between the "design" and the "engineering". It's always good to find an architect who really understands bridges, as there are plenty who have little sympathy for the structural and construction issues that are at the heart of all the great bridge design masterpieces. Having said that, the cable-stay is undoubtedly the more economic design for a light rail bridge of this span, and it's a shame more effort hasn't gone into making it more visually attractive.

I don't really think that these design options are being presented in an even-handed way. The images of the two options made public (and provided below) show that more care has been given to the detailing of the "wave" design. It's support piers have been shaped and fluted to make them look nicer than the more plain pylon columns shown for the cable-stay bridge, and the superstructure has been given a paler colour to make it look more slender. In a similar manner, an attractive post-and-wire parapet is shown for the wave bridge, but a solid opaque parapet for the cable-stay. And there is substantial scope to choose an alternative cable-stay pylon which would be much more attractive than that depicted. 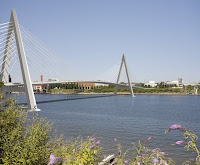 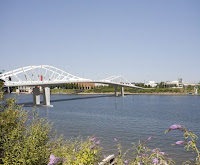 If Portland does eventually get the "wave" bridge option, it will be an ambitious venture, and one to follow with interest.