One of the most recent footbridge design competitions in the UK was launched by the Olympic Delivery Authority in May 2007, seeking a 54m wide, 26m long bridge as part of the proposed 2012 Olympic Park in East London. The unusual aspect of the bridge was that it only needed to be so wide during the actual Olympics, and will be partially dismantled to leave two 6.5m wide legacy bridges, passing above Carpenter's Lock, once the Olympics leave town.

The ODA received 46 expressions of interest, and the shortlist was announced two months later, and was notable for largely featuring teams who had relatively little experience of bridge design: a number of the usual suspects in the field were certainly quite surprised to be left out. I think it was really quiet commendable, however, as if the Olympics isn't an opportunity to give new talent a chance, what is?
The winning design by Adams Kara Taylor and Henneghan Peng was chosen by the competition jury and announced in October 2007. A construction contract was due to be awarded late in 2008.
The thing that strikes me most on looking at the images from this competition is how little it had to do with bridge design - this was really a competition for landscape architecture, with the sheer width of bridge required leading inexorably to a "land bridge" solution where anything structural is hidden below deck.
The AKT / Future Systems entry was for a stressed-ribbon design, which seems somewhat unnecessary where there's no vantage point to admire its slenderness, and which is less than ideal for mobility-impaired access or drainage.
The design from Jane Wernick and McDowell / Bennedetti is one of only two with a landmark structural element - a somewhat convoluted twisted "arch" used to suspend parts of the bridge, and very much out of scale with the deck. The Softroom and Eckersley O'Callaghan design is the other one, with slender arches in the temporary situation.
I think the winning design was definitely the best, with a more interesting legacy structure providing viewpoints down to the lock below, and with the most visually striking integration of the pre-games and post-games landscaping. Its central area, embedded with lights which can be programmed to display Olympic rings, colours, or flags, sets its apart, although its not clear to me if there's anywhere that anyone could actually see its display clearly.
As always, click on any image for a full-size version. Links are only provided where there is additional information available on each design.
Most of the images below were shamelessly "borrowed" from Building Design's website, where there is further information on each of the designs.
Winner
Adams Kara Taylor / Henneghan Peng 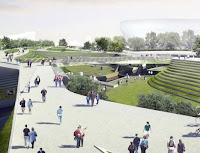 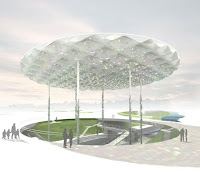 Posted by The Happy Pontist at 8:25 PM

Interesting blog... purely dedicated to bridge design. Was searching for Heneghan Peng's footbridge design and encountered your blog by chance... Thanks for your sharing :)