Okay. I think we all need to draw a deep breath before looking at this utterly baffling bridge. 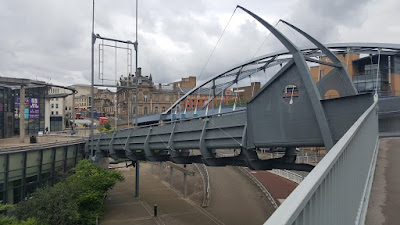 This little curiosity is just next door to the Park Square Bridge. It forms one of two approach ramps to a footbridge over the Park Square roundabout, with the other ramp and main structure being much less interesting steel box girder spans. This ramp provides a main access route into the Pond's Forge International Sports Centre.

My only source of information on this structure comes from an ICE leaflet titled "Sheffield: A Civilised Place". This states that the footbridge was required by the client to be "interesting and imaginative", against which criteria it must be considered a great success. If anyone out there can share more information, please do!

At first glance, it seems like some weird preying-mantis version of a cable-stayed bridge, but I suspect this is not correct. At one end of the bridge there is an elevated tower, with two spindly arms cranked towards the span as if holding it up, but it seems unlikely this element can carry any significant load, in the absence of back-stays. The cables themselves are very slender, and they connect not to the bridge deck, but to the upper ends of parapet posts (again, with nothing to balance any horizontal force in the wires). I think these parts are essentially decorative, or perhaps helping slightly to resist twisting of the walkway.

I wondered whether the bridge might be half-through U-frame structure, with the perforated parapet plates acting as the webs, but note that there is no upper compression member, and that these plates are discontinuous before the upper end of the span: the main part of the bridge has parapet plates and posts inclined inwards, but towards this end of the span there are vertical walls contiguous with the mast pieces.

The parapet posts are almost grotesquely over-sized, and are aided/abetted by horizontal parapet rails which seem quite superfluous. My sense is that that parapet posts, which continue under the deck to form clamp-shaped support frames, are simply a series of transverse frames holding up both deck and balustrades.

Every second parapet post is connected at its upper end via two diagonal wires to the lower end of intermediate posts. These positions are then wired to nodes below the deck. I wondered if this might form some kind of stiffening truss, but there are no longitudinal chords. Perhaps they restrain the parapet posts against longitudinal movement, but the parapet panels are quite capable of doing that. Again, I'm left unable to decide whether they help a little to restrain twisting, or are simply decorative.

At the opposite end of the bridge from the "support" tower is a second tower, supporting what looks like an empty signboard. This is connected by wires to a baffling collection of bits and pieces below the bridge deck, but I think all this is doing nothing more than holding up the tower and its (empty) signboard.

The parapet "clamp" frames sit on a single tubular member running below deck, with a combined relationship something like a spine and rib cage. So far as I can tell, this single tube, dwarfed by the massive but seemingly over-wrought metalwork above it, is a simple beam supporting the main span and resisting both bending and torsional effects. This tube is connected to support frames at either end and hence to ground.

I think I have rarely encountered such a confused, confusing shambles of a structure. It is "interesting" in the way that a car-crash is interesting: it's difficult to look away from the sheer horror. It is "imaginative" in the way that a David Smith sculpture is imaginative: a creative juxtaposition of geometries in three dimensions. But a sculpture's primary function is visual, not structural.

In principle, I'm all in favour of whimsy in bridge design. Bridges, especially on a small scale, do not all have to be po-faced and technologically constrained. I'd quite like to like this bridge.

Thats about right! I always used to walk rather quickly past this bridge! It is a bit embarrassing if I am honest ...... but there are some people in Sheffield who like it!

is it supposed to look like a rabbit with those floppy eared towers and the eyelet?

I think its brilliant. Looks fantastic and certainly opitomises the strength of natures creatures but doing it in a organic way. Awe inspiring