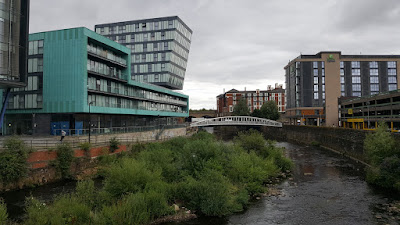 Heading upstream along the River Don, from the Cobweb Bridge, you pass under the busy A61 road bridge, and come to a modern footbridge, which appears to be called the Smithfield Bridge after the site of the former Smithfield Market car park.

The new bridge spans 40m, and carries a 2m wide footway, connecting the river banks at high level (above flood defences), and inter-connecting a number of pedestrian routes including the Five Weirs riverside walk. Completed in July 2010, it was designed and built by CTS Bridges, and is a type of bridge they've supplied at several locations across the UK.

Structurally, the bridge is not especially remarkable. It consists of two lightly inclined painted structural steel tubular arches with Vierendeel infill. The parapets are perforated steel plate, which is not very attractive but probably a smart move given the nearby Cobweb Bridge's history of parapet vandalism.

There are two aspects to the bridge that I felt made it worthwhile featuring here.

The first is an observation. The bridge as built is not the bridge that received planning permission, and it would be interesting to learn quite how the original plan was substituted for something much cheaper.

The planning application for the bridge describes and shows a more attractive and generous structure, with a 3m wide rather than 2m wide footway, in the form of a "butterfly arch", described as "both striking in appearance and economical in construction". Evidently, it was not economical enough for somebody involved in the project.

Here is just one of the visualisation images taken from the planning application: 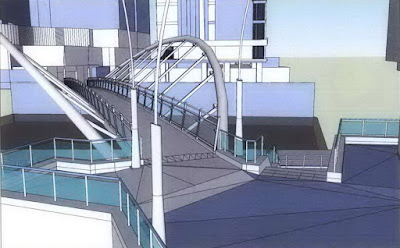 The second point of interest is a very odd steel bar which appears to be either suspended from or propping up one end of the bridge. I spent some time on site trying to work out what this was for, without success, but the planning consent documents explain the purpose.

The bridge at this end is slightly lower, and although the bridge deck is above the river flood level, there is a concern that flood-borne debris could strike the bridge. The bridge alignment is skewed across the river, so debris hitting the bridge here could easily become trapped with nowhere to go, impeding river flow or in the worst case pushing the bridge off its supports.

The peculiar bar is therefore a debris fender, designed to channel debris away from the corner and back into the river flow.

It certainly isn't a pretty addition to the bridge, but presumably there was little choice, as the only other option would have been to raise the bridge, with an impact on ground levels, ramps and possibly adjacent buildings.

It would, however, have looked much better.

According to the Yorkshire Post, the bridge was funded by Yorkshire Forward, the Environment Agency, and the European Regional Development Fund, so it seems unlikely that the choice of the cheaper bridge solution can be laid at the door of a penny-pinching developer. Perhaps it owed more to a general tightening of budgets in the wake of the 2008 recession.

Posted by The Happy Pontist at 7:31 PM