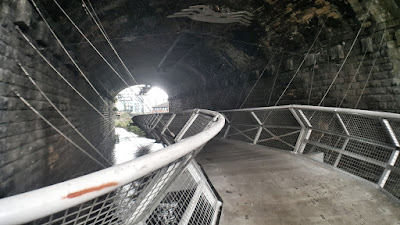 Next stop, Sheffield, where I visited several bridges recently.

The Cobweb Bridge was top of my list, I'd wanted to see this bridge for quite some time.

Built in 2003, it forms a key link in the city's Five Weirs Walk. It allows walkers to negotiate two obstacles at the same time: the River Don, and the Wicker Arches railway viaduct (officially the Victoria Viaduct). The Cobweb Bridge spans the river while passing below the Grade II* railway bridge.

The bridge was designed by Sheffield City Council's in-house structures team, and built by Thyssen. It's a lovely idea: a slender platform suspended from the rail viaduct vault by a spider's web of steel cables. Lurking above it at the crown of the arch are giant metal spiders, which house lighting units.

I saw it on a grey and drizzly day, which didn't help, but I found the bridge a little disappointing in reality.

It is S-shaped in plan, with two arced segments at each end connected by a long straight walkway in between. It makes for an interesting series of perspectives, although the main length of the walkway is very tunnel-like.

At one end, the walkway is supported on a set of support legs, designed entirely without visual finesse. At the other end, it spans from the riverside onto an intermediate suspended frame. In places, the geometry of the bridge and its parapets seems slightly mis-aligned.

The support cables are slender steel wires anchored into the stonework of the viaduct via proprietary Cintec anchors. The cables are arranged with a degree of triangulation to eliminate sway, and further stiffness is provided via tie-down cables inclined below the deck. These incorporate turnbuckles, which will have allowed both sets of cables to be stressed against each other. I didn't observe any significant vibration, indicating the design to be effective.

The major problem with the bridge relates to its troubled history, not to its original design. After opening, the bridge suffered repeatedly from vandalism, and deterioration of the original flooring, which appears to have been timber with a red-coloured anti-slip covering.

The parapets as originally designed featured longitudinal steel wires as the infill, and the cleats which supported these are still visible today. You can see how the bridge once looked by following the Wikipedia link below. However, the wires were repeatedly vandalised and stolen, eventually leading to closure of the bridge and a refurbishment programme in 2012. The wires were replaced with a tougher metal mesh, and the timber floor with grey FRP panels.

These appear to be vandal-resistant, but the changes have dramatically downgraded the appearance of the bridge, from something that was once lightweight and open to something more greatly resembling an industrial cage.

It remains a remarkable and interesting structure, and an imaginative way to carry a footpath past obstacles with difficult issues relating to physical geometry, asset ownership and heritage value. I can't think of anything else in the UK with a similar structural form.

It's a tremendous shame to see it in its current state. 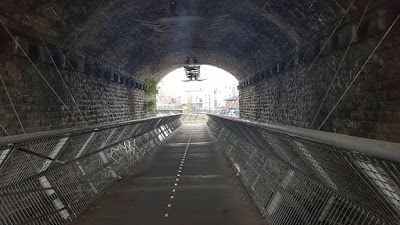