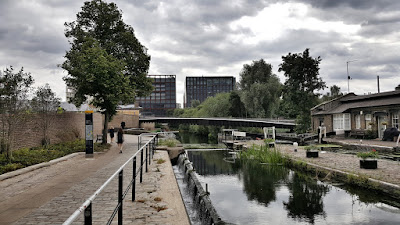 The first, Somers Town Bridge, is new to the point of not being quite finished: it's open to the public but I think some snagging remains. It carries a new footpath across Regent's Canal, a few blocks north of King's Cross station. The whole area was once derelict but is now seeing glossy new development spreading across the landscape like some kind of fast-multiplying spores.

This is the territory of a massive Google office, of over-priced hipster food joints, of aspirational bright-young-things living in the overpainted shells of former gas holders. There's the smell of money everywhere, and where there is new money, there have to be new bridges, connecting each new mushroom patch together.

Somers Town Bridge currently links a fairly circuitous pathway between Camley Street and the Granary Square plaza. It will become more useful soon when the Gasholders residential blocks are open, along with Heatherwick Studio's urban chic shopping mall, the Coal Drops Yard. These are all elements in the Kings Cross Development Partnership's wider regeneration scheme.

For now, the new footbridge is only open to the public between 6am and 9pm each day. This is an initial measure because of security concerns.

It has been designed by Moxon Architects and Arup, and spans 38m across the canal. The 55-tonne bridge was built by main contractor Carillion and steelwork subcontractor SH Structures.

Structurally, it is a bathtub form, or to be technical, a half-through U-frame girder bridge. This form of structure gives a shallow construction depth (from floor level to soffit). The upper flanges of the girders are stainless steel, tilted at 15 degrees to be perpendicular to the inclined bathtub web plates (and, presumably, to reduce the risk of creating a flat ledge). The walkway floor forms the bottom flange, and is painted structural steel, along with the webs.

This is an unusual combination of materials, with stainless steel welded directly to ordinary structural steel. Wherever these two metals are in direct contact, there is a tendency for greater corrosion to occur at the interface, as stainless steel is the more noble material. This has been addressed on the Somers Town Bridge by simply overpainting the boundary between the two types of steel. This detail can't be seen as it's tucked away on the underside of the top flange. It's made clear on one of the planning consent drawings, however.

Why choose stainless steel for the top flange at all? There are certainly aesthetic benefits on an element which may be prone to being trodden on, but the main reason seems to be to allow the stainless steel parapet to be welded rather than bolted on. This is driven by the form of the parapet, which consists of a flat top rail and vertical flats at 100mm centres.

To bolt several hundred verticals onto the main girders would have been absurd, so the only two options are either to weld every vertical, or to introduce an intermediate lower parapet rail, which would in turn be bolted to the girders via intermittent posts or stiffeners. I guess this latter option is not compatible with the design's minimalist aesthetic, and having taken the decision to weld the vertical slats onto the girder, using a stainless steel top flange and tucking the bimetallic junction underneath does make some kind of sense.

The planning documents state the stainless steel material as Duplex 2205, which is a popular choice for bridgeworks and should have good strength, toughness and corrosion resistance.

The floor plate is 15mm thick, and the walkway is 3.5m wide. The floor plate sounds pretty thin, but is not especially remarkable - a suitable point of comparison is the standard Network Rail footbridge, which can span up to 28m, with a 2m wide walkway, and which uses only a 10mm thick floor plate, with the U-frame stiffeners at significantly greater spacing as well. Although the floor plate is slender, the two stainless steel top flanges are each 45mm thick.

The depth of the girders varies, increasing from 0.4m at the abutments to 1.1m at midspan. The parapets, which are also in stainless steel , are vertical and a constant height of 1.4m (1.1m to handrail). Because the edge girders are inclined at 15 degrees to vertical, the result is a constantly changing relationship between the girder top flange and the balustrade elements, with L-shaped slats being tall and narrow at the ends of the bridge and short and wide in the middle of the bridge.

The planning documents show the bridge as being painted in a dark "anthracite" colour, with a gritted epoxy resin floor similar to the resin-bound gravel walkway approaches. The proposal was to continue the resin finish up the inside of the webs, but this has not been undertaken in practice, with the painted finish used on both faces of the edge girders.

There are a number of particularly interesting features to the bridge. The first took some time for me to figure out: all the parapet support slats are at an angle to the main girders. I struggled to see the point of this arrangement, wondering if it was to create a particular louvred view, opening views from some angles and obscuring them from others.

The answer to the puzzle can be found on the underside of the bridge: the bathtub lateral stiffeners (the U-frames) are also placed at an angle. The bridge itself crosses the canal at a significant angle, and everything is skewed accordingly. This means that the U-frame stiffeners are parallel to the skewed bridge abutments (and canal edges) rather than perpendicular to the deck, and the same is true of the parapet slats.

It makes sense but still feels quite peculiar when encountered crossing the bridge. An advantage of the detailing is that it orients and opens up views when looking along the canal. If the U-frames had been perpendicular to the bridge axis, they would merge together visually into an undistinguished mass, making the bridge deck look significantly deeper than it really is. With the skewed arrangement it's easier to see the true depth of the bridge, and its visual impact is diminished, although only a little as the visual merge effect is still very much apparent when viewing the bridge from any other perspective.

The dark paint colour is appropriate to the canal environment, reminiscent of the black paint used on many historic canal structures, but it does lead to a degree of visual "murk". The texture of the U-frame ribs adds visual interest, but the dark colour reduces visual differentiation between ribs and bathtub plates. Some of my photos are misleading here, as I've adjusted the contrast to make the form of structure clearer.

Another prominent feature is a series of three panels at the centre of the bridge, adorned only with the number "34B". This is the official Regent's Canal bridge reference, of course, but this chunky block at midspan seems at odds with the desire to express a visual lightness.

Again, the planning submission explains the reason, which is that the bridge is physically light enough to require the presence of a tuned mass damper (TMD) at midspan to counteract pedestrian-induced vibration. In the planning drawings, only a single bay is occupied by the TMD, which is a cast steel element suspended on springs. In the bridge as-built, three bays are occupied, and the TMD is hidden behind a cover plate.

The bridge has to do more than just span across a canal; it is also bridging two very different environments: the redevelopment to the east, and Camley Street Nature Park to the west. Between the two, there is over a 4m change in level, and to address this there is a lengthy curved ramp at the western end. Building this has taken a considerable bite out of the nature park, and I gather that either a visitor centre will be relocated or some replanting will take place in this zone.

There is a slightly mannered physical transition between the two environments as well: heading downhill and westward from the bridge, the stainless steel balustrades give way to combined timber and stainless steel guardrails, with a graduated transition between the two. At the bottom of this approach path there is a bollard to block vehicle access.

At the upper end of the bridge, to the east, a second bollard is located on the bridge deck, and this serves as a support for two swing gates used to provide night-time security.

Given its scale and location, this is a remarkably interesting bridge. I think it is a little coy in nature, adopting some very sophisticated detailing in the service of a simple yet forced modesty. It's certainly a far better choice for the location than a more "showy" structure, but it's interesting to see quite how much work has gone into producing something so carefully restrained. 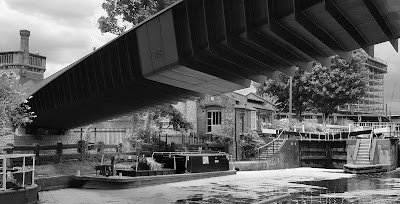 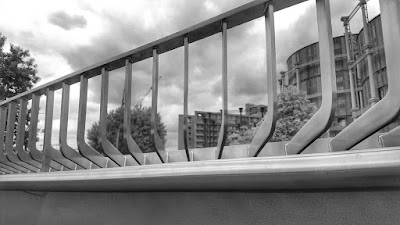 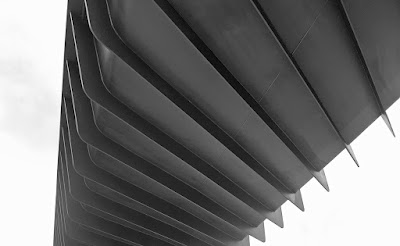 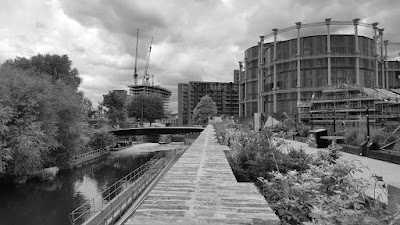 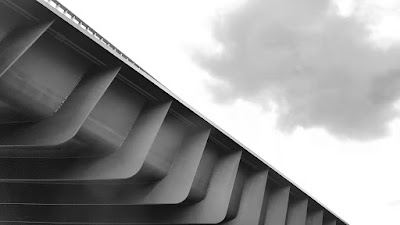 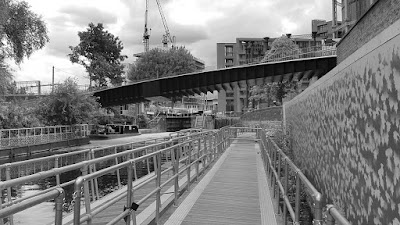 Once again a very interesting use of steel. This time the ribs which normally would be internal to the box beam are external. The effect is striking, although I believe the long term maintenance costs will be increased. A lot more surface area is exposed to the weather. From and artistic point of view, the railing is completely congruent with the underside. I like this bridge, but I wouldn't want to own it. Art for art's sake is nice, but in this case, I believe in the long term, all these external ribs will turn out to have been a very impractical idea. Perhaps ornamental ribs of lessor dimension would have provided the same effect, but then welding them all in place would be as time consuming as the original so construction time at least for the internal and external ribs would be doubled. Everything is a trade off. Often it's hard to decide what should or should not be. All in all, the effect on this bridge is nice, and the idea seems to be original.